Right from the time of Independence the requirement for a Chief of Defence Staff (CDS) was felt. The proposal for adopting the CDS system was fielded by the first Governor General of India, Lord Louis Mountbatten who had first hand experience of unified command as the Supreme Allied Commander (unified command, consisting of Army, Air force and Navy).

This proposal was cold shouldered by Pandit Nehru, then Prime Minister of India. Although the PM agreed with Mountbatten in principle, he felt that it would give the Indian politician the impression of perpetuating the idea of a great Commander-in-Chief of India. Finally Mountbatten left it to Lord Ismay to work out some other system. Thereafter the proposal for adopting the CDS was simply put aside.

Consequent to Kargil operations, the need to adopt the CDS system once again came up for revival. While the Subrahmanyam Committee took up a number of issues, it for some unknown reason left out the requirement of a CDS. It was the Arun Singh Committee, based on my presentation to it, on the imperatives of adopting the CDS system in its full play (with integrated theater commands - ITCs) that this issue was taken up.

To start with, I had recommended two ITCs, one for the Andaman and Nicobar Islands and a second Northern ITC, and to allay the misapprehensions of the IAF, the first theater commander of Northern ITC should be an air force officer with chief of staff from the army. The remaining ITCs were to come up subsequently, in a phased manner. However only the Andaman and Nicobar ITC was formed and nothing else. Later, the Naresh Chandera Committee took up these issues but again nothing much materialized, consequent to its deliberations.

Finally in August 2019 the post of CDS was announced by the PM (and not through an Act of Parliament) and on 23 August a committee under the NSA was convened to formulate the role and powers of the CDS. On 1 January 2020 Gen Bipin Rawat assumed office as CDS and was charged with the following functions:

Secretary in the newly formed Department of Military Affairs (DMA) in the Ministry of Defence. The main issues the CDS is required to handle are:

a) Be principal adviser to the defence minister

b) Integrate resources of the three services. Indigenize and modernize their equipment

e) Advise the government on allocation of funds for defence

As far as constituting integrated theater commands is concerned, what is pertinent to note is that no operational role is assigned to the CDS. While it is consequent to the formulation of an overall strategic war plan related to a two or even three front war (these being China, Pakistan and the Indian Ocean Region) that integrated theater commands would be constituted.

In determining their composition and areas of responsibility, a range of factors need be considered. Some of these being enemy capabilities in each sector and its likely overall war plan, as well as own design of battle, i.e. where to be completely on the defensive, where to stage offensive defence and finally where an all out offensive is to be launched and objectives thereby, whose captures would bring enemy down on its knees.

With no operation command over ITCs Bipin Rawat went ahead and recommended only two ITCs for the entire land borders of the country and one maritime ITC for the entire Indian Ocean Region (IOR). Perhaps the economic angle in limiting ITCs to just two appeared to be the more compelling reason rather than the strategic imperatives.

Equally and possibly General Rawat in recommending only one integrated theater command for the Northern border with Tibet and part of PoK tried to copy the PLA on the one hand and on the other bring about a reduction in the number of commands (army and IAF).

It is both possible and convenient for the PLA to have a single command on the Tibet plateau due to the type of terrain and excellent roads system laterally and to variouspoints on the LAC with India. While on the Indian side the terrain is of high mountains and deep valleys, with poor road communications, both to specific points on the LAC and laterally, making movement difficult and slow.

This one Northern Integrated Command would cover the borders with Bangladesh, Burma, Tibet and parts of PoK. The second ITC extends from parts of PoK down to the Run of Kutch. The third ITC (Maritime ITC) to cover the entire Indian Ocean Region. Surely just three ITCs for this vast land border and sea frontage would be totally inadequate.

The best option could be to convert the existing five army commands (Eastern, Central, Northern, Western and South Western Command) into Integrated Theater commands. The South Western Integrated Command could always have a commander from the IAF. These ITCs should have integrated staff. As for the IOR there should be three ITCs, one for the Arabian Sea, second for the Bay of Bengal and third for the Andaman and Nicobar Islands.

While CDS must be the overall operational commander, the existing Integrated Defence HQ should form part of CDS HQ and the entire set-up must stand independent of MoD. It should have three chiefs of staff one from each of the three services.

The IAF continues to have some misgivings and reservations on adoption of the ITC concept. It is contended that air power is highly flexible and can be applied across a wide front on a range of targets, as a whole or in smaller components. Further the present number of squadrons are inadequate and their distribution to ITCs would mitigate against the fuller application of air power at critical enemy targets. Gen Rawat further muddied the waters by equating air power with artillery.

These observations of the IAF do not hold good when put to detailed analysis. While currently the squadron strength is down to 32, it will soon have to be raised to 45: perhaps more. Their distribution to ITCs would be based on detailed examination of the tasks etc, of each ITC. Secondly under certain requirements the CDS can, temporarily, switch IAF resources from one ITC to another for specific missions.

The other connected area, related to national security, which requires early attention is modernization of the forces. Till date we import almost 70 percent of military equipment – though we have had over four dozen DRDO establishments, an equal number of ordnanace factories and over a dozen defence PSUs. These establishments have failed to deliver and this calls for major change in their working and control.

The proposed DMA in the MoD, instead of being headed by the CDS, should have a four star defence services officer with integrated staff to direct and control the working of four establishments (DRDO, Ordnance Factories, Defence PSUs and the Directorate-General of Quality Assurance). This one change will for sure bring about a sea change in the working of these establishments and their performance, which till now has been [word missing here]

Equally it would be premature to ban the import of such a large number of defence items and equipment in the hope that the same would be made in India. We have to first establish acceptable quality of such locally produced equipment etc, before banning their import. What must not be overlooked is that it is with such equipment that troops have to face the enemy, and often in a situation where you either kill the enemy or get killed, because of one’s poor quality equipment.

What the government must look into is a range of electrical equipment and other items being imported into the country when all or most of these, given the necessary push, can be easily produced within the country. At another level, why must we import very expensive bulletproof cars for VIPs, whereas similar Indian cars can be easily made bullet proof and can fully meet the requirement? 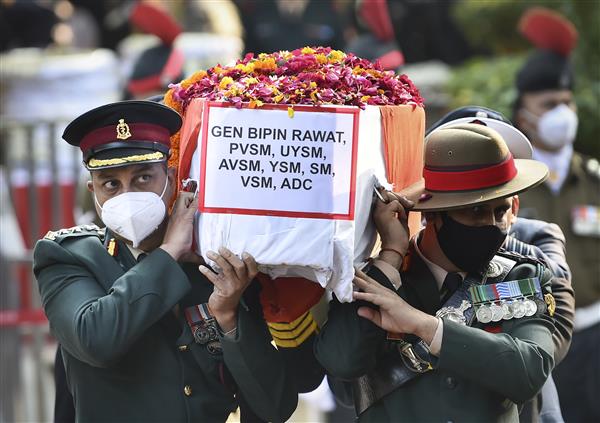