India and China have not joined the positions taken by the West on the Russian war in Ukraine. They abstained in the UN Security Council and General Assembly from condemning the Russian aggression and have not approved of sanctions. But beyond that their positions are distinct. Meanwhile the war still goes on.

The first difference in position arises from the divergent relations that India and China have with the United States. The US sees China as its primary strategic competitor and is determined to retain its position of primacy in all fields by circumventing China’s rise. To finesse China it has evolved a string of policies under the thematic of Strategic Competition with China.

The Russian aggression in Ukraine is open opportunity for the US providing it with an ideal proxy war – an opportunity to crush Russia which it sees as China’s main alliance partner, keep the European Union under its tutelage, build alliances in the Indo-Pacific which includes Asian powers and Australia, and boost its arms and oil industry and exports by sanctioning Russia.

China is acutely aware of the long term military containment and competition policies of the USA as well as its deglobalization as mainly targeting China. China has stood strong in understanding the reasons for the Russian aggression as related to Russian ‘legitimate security interests’, a phrase used by many in the Global South.

China has sought to bypass sanctions, but Chinese companies are cautious not to have secondary sanctions applied to themselves. But aside from diplomatic statements China remains aloof and nor has Russia sought to engage any third country in this war.

India on the other hand has built harmonious relations with the US over the past few decades, and yet held its own when it came to relations with Russia and other US targets. India has leveraged its markets, weapons buying capacities, resources and relations to balance and resist the intense pressure from the US and the West without giving up its interests with Russia.

Secondly, US and Western multinational companies are moving to securitise trade. The Western trade policy called ‘re-shoring’ which then became ‘near-shoring’ in essence means that trade be prioritised between allies alone.

In fact the US finance minister Janet Yellen, in a brutal politicisation of trade policy, called it ‘friend-shoring’. This friend-shoring is in keeping with Biden’s alliance of ‘democracies’ opposing or isolating the ‘authoritarians’. This is the new carrot the US is offering to the ASEAN states, India and the rest to oppose Russia, China, Iran and other select enemies. India in this is looking for increased trade and development opportunities in place of China while retaining the partnership with Russia. In the long term however ‘friend-shoring’ is the plan for selective deglobalization.

The third major issue for the Russia-India-China-US relationship is on security matters. The US is clear that its strategic targets are both Russia and China, and then Iran, Cuba, and so on. China under Xi Jinping on the other hand continues to focus on prosperity over security to maintain its rise, in contrast to Russia under Putin that prioritises strategic parity over economic development. Xi’s recent call for inclusive and indivisible security is asking for an accommodation with the West on security in exchange for trade. The US will not accept this in the long run, although Europe would like to continue its trade and value chain lines with China.

The flaw in Xi’s proposed Global Security Initiative of inclusive and indivisible security is that there is no talk of respecting or maintaining existing state and maritime boundaries. Without accepting these, China’s proposal for common security will not appeal to either the already sceptical West or its Asian neighbours. And this is the weakest point for India and its relations with China and Russia. A further problem for China is that even Russia and the central Asian republics have fears over China’s territorial expansion interests.

The US is banking on a weakened Russia to become a strategic burden on China, which would also free up India from Russian support. Deepening Sino-India tensions will also help the US put further pressure on India to reorient their partnership. It is more than clear that Russia and China have no intention of being hyphenated. All the evidence - including China’s lack of information on the Russian aggression or the current status of the war - shows the two will remain distinct sovereign allies with no military understanding and nothing further.

So now it remains to be seen how India will steer its future strategies. So far its policy of neutrality has drawn criticism from the West and admiration from the East and South. It is based on a domestic political consensus, even as many would prefer closer alliances with NATO and the QUAD.

Neutrality is not the same as non-alignment, is not based on normative principles and is primarily transactional. At the same time, the stability of a position of not being engaged in a conflict is drawing the attention of capital and industry.

India will be pulled in both directions, but it seems more than clear that it cannot be drawn into any military alliance. For the time being then, this tangle will remain as is. 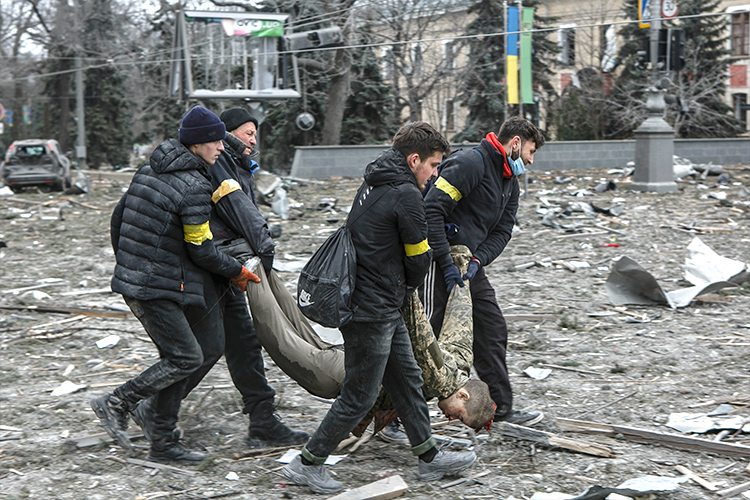 Professor Anuradha Chenoy is the Dean, School of International Studies, Jawaharlal Nehru University, New Delhi. She is an expert on Russia