The fallout of the war in Ukraine over Europe is largely seen in terms of the uncertainties over the continent’s heavy dependence on Russian energy and the impact of it on the economies of the 27 EU member countries. Imposing restrictions on Russian oil has proven a much more complicated task than imagined previously.

Countries that are highly dependent on Russian fossil fuels are concerned about the implications of such measures for their own economies. Hungary, for example, is apparently asking for financial support of between $16 billion and $19 billion to move away from Russian energy.

It also refuses to discuss the matter at the upcoming Extraordinary European summit on Monday/Tuesday in Brussels. Prime Minister Viktor Orban asked in a letter to the President of the European Council, Charles Michel, that the oil embargo be removed from the topics of discussion at the summit.

Equally, there is much debris falling on Europe on other fronts. The UN says that as of May 24, 6.6 million refugees have left Ukraine for neighbouring countries. They are entitled to social welfare payments and access to housing, medical treatment and schools. But this coincides with a cost of living crisis in Europe.

A confluence of economic shocks continues to threaten the outlook for the EU bloc. The CEOs of several European blue chip companies told CNBC recently that they see a significant recession coming down the pike in Europe.

But what is by far most crucial for Europe is the endgame in Ukraine, which Russia cannot afford to lose. Such wars usually end with a dirty diplomatic settlement. Clearly, the initial blue-and-yellow flag-waving phase of the war is steadily giving way to a sombre mood as the slow, grinding phase of the Russian advance in the Donbass and the stunning success in Mariupol bring in grim realities.

Henry Kissinger has come out in the open at the World Economic Forum at Davos to argue that Europe needs to have its own independent, and clear-headed definition of its strategic goals. In a conversation with WEF founder Klaus Schwab on Monday, Kissinger made three important points.

He said, “Parties should be brought to peace talks within the next two months. Ukraine should’ve been a bridge between Europe and Russia, but now, as the relationships are reshaped, we may enter a space where the dividing line is redrawn and Russia is entirely isolated.”

Kissinger estimated that European interests would be best served by a normalisation of relations and increased cooperation right across the European continent, including Russia and Ukraine. This is the first point. Second, Kissinger’s prognosis is that the conflict in Ukraine can permanently restructure the global order. In his words,

“We are facing a situation now where Russia could alienate itself completely from Europe and seek a permanent alliance elsewhere. This may lead to Cold War-like diplomatic distances, which will set us back decades. We should strive for long-term peace.”

A highly nuanced hint here is that both Europe and Russia’s interests vis-a-vis China’s rise are congruent and if the Atlanticist politicians in Brussels and their assorted Russophobic allies in Eastern Europe and their mentors in Washington, DC keep pushing the dated Cold War ideology over the long-term political and economic interests of European citizens, the most likely scenario will be even greater Russian rapprochement with China.

To quote Kissinger, “Looked at from a long-term point of view, Russia has been, for 400 years, an essential part of Europe, and European policy over that period of time has been affected, fundamentally, by its European assessment of the role of Russia. Sometimes in an observing way, but on a number of occasions as the guarantor, or the instrument, by which the European balance could be re-established. Current policy should keep in mind the restoration of this role is important to develop, so that Russia is not driven into a permanent alliance with China. But European relations with it are not the only key element of this…”

What Kissinger didn’t say explicitly is that in such a scenario, the EU is destined to suffer a loss of clout and a subaltern role to Washington’s, with less strategic autonomy than it would and could have enjoyed, had it not subordinated all of its interests to Washington and had instead maintained a more independent and balanced position.

Third, Kissinger argues that realpolitik dictates that the European efforts should concentrate on the resolution of the territorial disputes between Russia and Ukraine: “Ideally, the dividing line should be a return to the status quo ante. Pursuing the war beyond that point will not be about the freedom of Ukraine, but a new war against Russia itself.” By status quo ante, he was of course referring to Kiev’s acceptance of Crimea, Lugansk, and Donetsk remaining under Russia’s control.

In a very refreshing perspective, Kissinger all but hinted that an EU-Ukraine-Russia axis would be competitive with Beijing and Washington on the global playing field. He visualised that China and the United States “in the next years have to come to some definition of how to conduct the long-term relationship of countries, it depends on their strategic capacities, but also on their interpretation of these capacities… The challenge is whether this adversarial aspect can be mitigated and progressively eased by the diplomacy that both sides conduct and it cannot be done unilaterally by one side. So, both sides have to come to the conviction that some easing of the political relationship is essential…”

Given Kissinger’s formidable foreign-policy legacy as a diplomatist and statesman, his remarks are bound to influence the European statesmen about the endgame in Ukraine. The telephone conversation between Russian President Vladimir Putin, French President Emmanuel Macron and German Chancellor Olaf Scholz on Saturday can be seen against the above backdrop.

The conversation took place on the eve of the European summit in Brussels. But Washington has let it be known on Saturday already through a media leak that the Biden Administration is considering the transfer of long-range rocket systems to Ukraine as soon as the coming week. Now, that would be seen as provocation by Russia. All indications are that the Biden administration will not mind a prolonged war in Ukraine and may see advantages in it.

The former Ukrainian President Viktor Yanukovich has warned that Ukraine risks not only losing vast territories in its south and east but also a “complete destruction” of its sovereignty. He said the US never really saw Ukraine as an independent country but as a mere “territory from which a total weakening of Russia should begin.” Indeed, Zelensky himself reminds us increasingly of the Christian legend of the Wandering Jew who, as a consequence of rejecting Jesus, is condemned never to die, but to wander homeless through the world.

About a month ago, in a rare statement, Russia’s Foreign Intelligence Service (SVR) accused Washington and Warsaw of plotting to restore Polish control over part of western Ukraine, which Poland had ruled at different times in the past, most recently between the two world wars. The territories include the city of Lviv, which were absorbed into the Soviet Union at the end of World War II.

The SVR said the US was discussing with Poland a plan under which Polish “peacekeeping” forces without a NATO mandate would enter parts of western Ukraine where the chance of a confrontation with Russian forces was low. The SVR’s intelligence scoop presumably triggered an expulsion of 45 Russian diplomats in Poland and a physical attack on the Russian Ambassador at a public function at Warsaw.

Curiously, soon afterward, on May 24, Ukrainian President Volodymyr Zelensky announced “joint customs control” on Ukraine’s border with Poland, which he described as “also the beginning of our integration into the common customs space of the European Union… (and) a truly historic process.” Zelensky said Ukraine-Poland relations are “finally completely free of quarrels and the legacy of old conflicts. I would like the brotherhood between Ukrainians and Poles to last forever… our unity of Ukrainians and Poles is a constant that no one will break.” Two days before that, Polish President Andrzej Duda had visited Kiev.

To be sure, Zelensky and Duda acted with US approval. In effect, Ukraine’s sovereignty over its western regions bordering Poland is eroded. Kiev has also announced plans to grant special legal status to Polish citizens. Plainly put, a de facto “merger” is under way.

A reclamation of lost territories in western Ukraine (estimated to be 178000 sq. kms) would make Poland much larger than Germany — exceeding 500,000 sq. kms as against Germany’s 357, 588 sq. kms. The geopolitical implications are far too profound to be overstated — to name a few, EU’s future, Germany’s rise, Europe’s autonomy, German-Russian relations, Russia’s security. 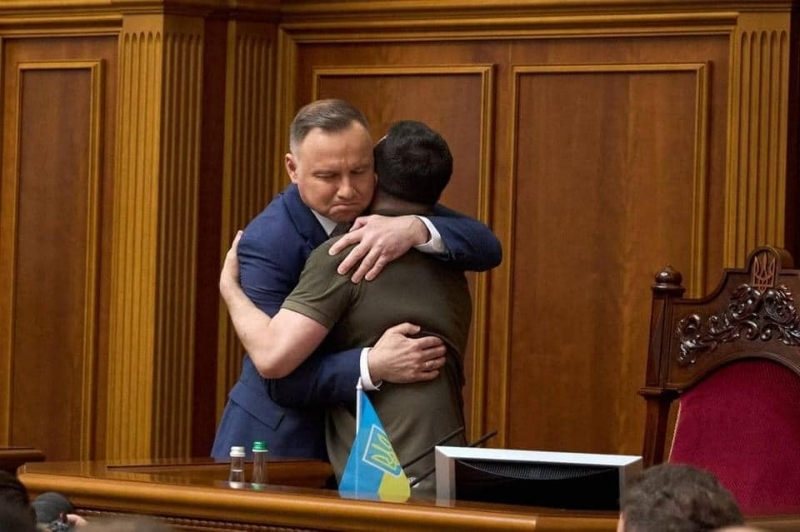