I can never forget. It is as if history is carved in memory, that still chills the spine and triggers reactions of sheer horror and disbelief.

It was just a couple of days after June 6, 1984. I had, along with photographer Sandeep Shankar, been inside the Golden Temple complex just a week before — a beat that made Punjab our second home. We were there every other day, in fact learnt to understand Punjabi if not speak it fluently, to cover one of India’s biggest battlefield of the times (the other two being Kashmir and Assam).

We had gone inside the most beautiful Gurudwara in the world (yet again), to meet Jarnail Singh Bhindranwale (yet again) and his many lieutenants and armed cadres who had by then taken over Harminder Sahib in Amritsar.

The tension was palpable as this was my first visit where we did not see any civilian pilgrims. But we were there to do a job and did it. Bhindranwale, as was his wont, was holding a small durbar on the rooftop, and while no one spoke of it there was a state of preparedness as if the men inside expected some kind of military action. Little did we know that this would be our last meeting with Bhindranwale, who did not betray any signs of tension. But that’s another story.

And it came. The Army soldiers stormed into the temple in the wee hours of the morning. And if an officer who was part of the operations told me later on condition of anonymity was speaking the truth, the soldiers were sent in unprepared with little to no idea of the layout. For instance many were killed while going down the steps of the gurdwara without knowing that little ventilation windows from the cellars opened on to these steps. On both sides. And they were mowed down by Bhindranwale’s guns as they went rushing down, completely caught by surprise, tripping and falling over bodies. And losing countless in the dark.

The Odessa steps scene from Battleship Potemkin. Dramatic and so bloody.

We heard on the outside that the Akal Takht had been ‘damaged’. The Army had sealed the entire area so there was no access but after a couple of days, after insistent knocking and yelling, we made it to the first batch of journalists taken into Harminder Sahib. Nothing had prepared us for what we saw. A HUGE gap where the Akal Takht had been. Unbelievable! I still remember the shiver down the spine, complete disbelief replaced by a flood of doom and foreboding that took over the mind and body.

What have they done? What will happen now? What have they unleashed? How could they have done this? How will they manage the repercussions? Questions went through the brain with staccato rapidity. And then the first batch of screened pilgrims started arriving. And the scenes remain imprinted… The old men and women who came and almost collapsed in grief. They sat around the parikrama, isolated Sikhs, with tears running down every cheek. Quiet and silent, like ghosts, they sat motionless, all eyes towards where the Akal Takht had been. The silence was eerie, and so so tragic.

By this time we journalists were back in action, trying to interview the pilgrims, and record their answers. They had no words for us, and their grief was so visibly profound that we hesitated to approach them. As their core had been wounded and they could not even look at us, let alone respond to questions that appeared stupid when juxtaposed against reality. So we fell back, tried to corner the Army officers, insisted on answers that no one really had, with the ‘we had to save our men’ and ‘the leaders had taken refuge in the Akal Takht and we had no other way of getting them out.’

We wrote reams questioning this, warning against more and worse. And as journalists often are the first chroniclers of history (at least used to be, now we are propagators of fake news and propaganda) we recorded the event as we recorded the years leading up to it, as we recorded the aftermath —in great detail. Bloody details that wounded the secular soul of India, perhaps irretrievably. 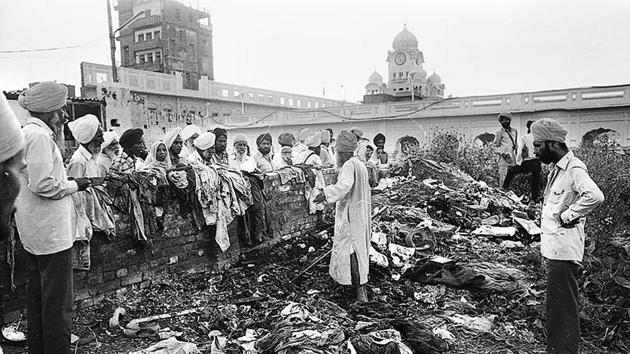