Cantonisation to Create a Melting Pot for Israelis

A boy displays a sign that reads “This is our land!” during a vigil to mark Land Day

An interesting plan for dividing Israel into provinces was published a few months ago by Haaretz. It suggested a remedy for the fragmentation of Israeli society and its failure to create a melting pot for Jews immigrating to Palestine.

In this article I provide a critique of the pros and cons of this plan and offer an alternative. The scheme, laid out by Carlo Strenger and Judd Yadid in a 7 October 2014 article entitled “How Cantonization can save Israel,” admits that Israel’s leaders failed “to impose a monolithic ideological and cultural hegemony on the country’s population.” The Ultra-Orthodox Jews, for example, were not “converted into card-carrying Zionists.” Tel Aviv residents will not “put up with marriage laws” with a foreign and invasive nature.

Strenger and Yadid find that the answer to “the country’s myriad identities” is to quarantine “the feuding peoples of Israel” into several different provinces with different regional powers with which they would exercise the life they are used to, according to their cultural and religious values. Or perhaps, more practically, they could continue to live as they did in their mother countries before they emigrated to Palestine, ranging from ghettos in Eastern Europe to affluent neighborhoods in London.

If this looks like a stark admission of the failure of “in-gathering of the exiles,” Israel’s President Reuven Rivlin was not mincing words when he declared at a conference on racism and hatred in Jerusalem last October that “Israel is a sick society with an illness that demands treatment.”

The lack of homogeneity in Israel is not surprising; the Jewish immigrants came to Palestine from 110 countries and they spoke more than eighty languages and dialects. Many of them continued their traditional ways, even though they learned modern Hebrew and their youth joined the army. The army was supposed to be the perfect melting pot for forging unity among immigrants against a common enemy, the Arabs, among whom they found themselves when they settled in Palestine. The conflicting backgrounds and diverse origins of the Israelis have been the subject of many studies. There are dozens of books, almost all by Jewish authors, on the fragmentation of the Israeli society, the failure of the melting pot, the ideological and economic bankruptcy of the kibbutz, the crises of “Israeli” identity, the founding myths of Israel, the invention of the Jewish people and the “Land of Israel,” the meaning of “post-Zionism,” the military character of Israel, the exploitation of the Holocaust and the mythical narrative of Israel’s birth and the attending denial of the Nakba – the 1948 ethnic cleansing of the Palestinians.[1]

This cantonization scheme is probably the first time that a Zionist proposal is made to separate the diverse groups geographically and legally at the “province” level. It probably aspires to resemble the Canadian provincial system with the obvious difference that the proposed Israeli provinces are tiny slivers of land, more like a British borough than the vast regions of Canada. Even so, the scheme represents optimism that present-day Israel, excluding the West Bank and Gaza, but including occupied East Jerusalem and Syria’s Golan Heights, can be divided into twelve provinces (see Map 1 below).

There would, for instance, be an “Orthodox religious province” of “Yehuda” stretching north from Jerusalem to “incorporate the majority of the country’s religious Jews” and including more than 1.6 million people on about 1,060 square kilometers of land. And there would be a province called “Aviv” covering 220 square kilometers and encompassing 1.2 million people. It would include Tel Aviv and would thus “empower the heart of secular Israeldom to cement its distinct value set, giving liberal Israel – both nationally and internationally - a far louder voice and stronger brand than just one city of 400,000 people.”

Only two of the provinces, “Jalila” in the north and “Badiya” in the south, would have predominantly or exclusively Arab populations. But given the diversity in Israel, there would need to be many times more than twelve provinces for full homogeneity to prevail in each one. Nevertheless, the province scheme, designed to advance Zionist goals, is interesting in that it proposes a novel practical solution that is worthy of close study, especially since it emanates from Israel’s leading “liberal” publication.

I shall examine the proposed scheme and see that its aim is to further Zionist policies of racism and apartheid. In fact, it would not produce homogeneity among Jews and, more so, will be far away from providing a peaceful or permanent solution in historic Palestine. I will also propose an amendment to this province scheme that might make it more viable. In these two would-be provinces live about 2,465,000 Jews and 277,000 Palestinians. The figures are misleading on two counts. First, the stated Palestinian population is mostly in East Jerusalem which was occupied in 1967.

There are almost no other Palestinians there because 127 Palestinian villages in this area were ethnically cleansed in 1948. Second, the Jews would be much more numerous than stated in Aviv province if this province is extended to the east up to the Ultra-Orthodox town of Bet Shemesh and extended south to the port of Isdud (Ashdod), thus reducing both Yehuda and Nitzan provinces. In the extended Aviv province there would be 3.5 million Jews, or 65 percent of all Jews, which is an ideal location for a Jewish canton.

This redistribution makes sense. The enlarged Aviv province will then correspond to the area of Jewish settlements in British Mandate era Palestine, namely the western and northern part of Jaffa district.

In short, this plan pursues the unchanged Zionist goal of gaining the maximum amount of land with the minimum number of Palestinians, while disguising it as an exercise in unleashing diversity and pluralism.

Map 1 shows the proposed provinces with total population in thousands, according to my calculations, marked on a pie chart where blue indicates Jewish population and pink indicates Palestinians. While the small area of Jalila province is fully Palestinian, incorporating 28 villages, the scheme ignores 160 Palestinian villages spreading far and wide beyond Jalila, shown here in black dots. 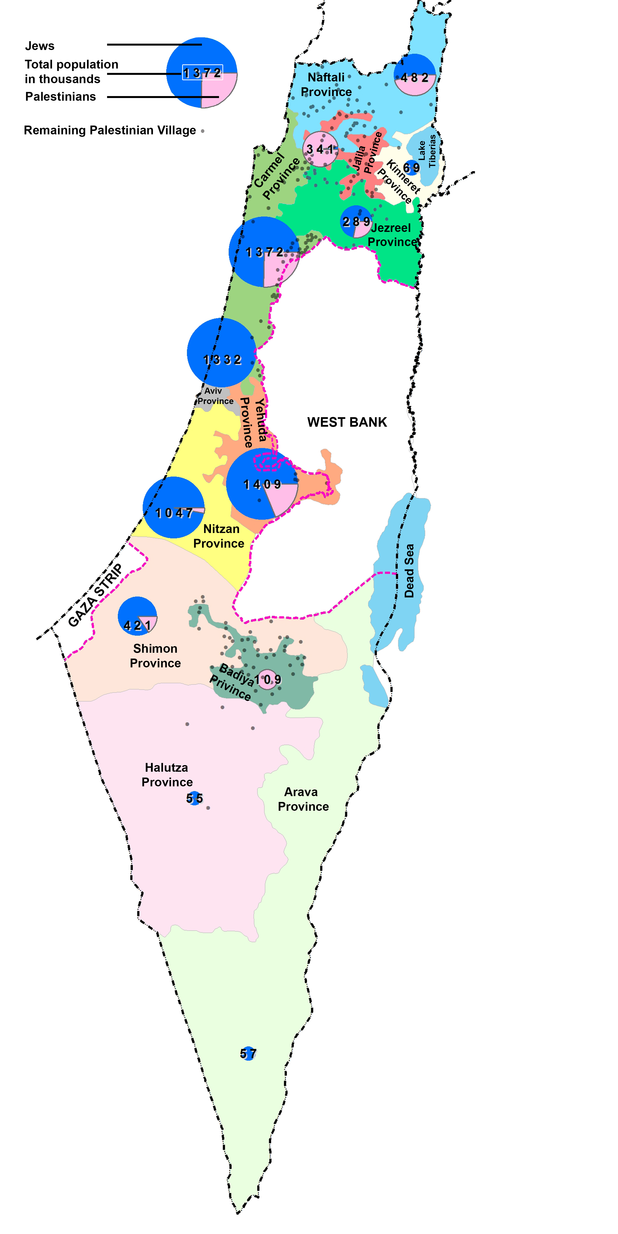 This is an attempt to revive the infamous Koenig Plan of April 1976, authored by senior Israeli interior ministry official Yisrael Koenig. It aimed at reducing the number, presence and influence of Palestinians in Galilee. The threat posed by the Koenig Plan led the Palestinians to counter action; they inaugurated Land Day, marked on 30 March every year since to emphasize their roots in their land. This movement is now much stronger and will not easily accept marginalization by the Israeli colonial regime.

Palestinians in this province are particularly worrying for the Israelis because of their stubborn defense of the holy sites in Jerusalem under the leadership of Sheikh Raed Salah, leader of the northern branch of the Islamic Movement.

In summary, this Zionist cantonization scheme would, if implemented, allow 99 percent of Jews to live in ten Jewish provinces which account for 95 percent of Israel’s area where they can enact their own regional laws in education, health, religion, culture, language and the like. With them would live 58 percent (835,000) of Palestinian citizens of Israel under purely Jewish laws without any influence on their own affairs.

Only 42 percent of Palestinians (600,000) would live in Palestinian areas (five percent of Israel’s area), where they could run their own local affairs, with fewer than one percent of Jews.

In other words, the majority of Palestinians in Israel today would remain under the shadow of Jewish rule even for their normal civil rights. Palestinians who are twenty percent of the citizenry in Israel are to be incarcerated in two percent of Israel in Galilee and three percent in the south.

The cantonization scheme therefore fails to achieve its stated objective: to diffuse the animosity between the various components of Jewish society in Israel hailing from a hundred different backgrounds. Moreover it will further marginalize the Palestinian citizens and strengthen Israeli policies of racism and apartheid. It will arrest their development and confine them to ghettos. Deprived of their agricultural land, financial support and democratic laws, they will be reduced to cheap labor in Israeli factories.

The plan is another attempt of many to partition Palestine. Such schemes progressively swallowed up Palestinian territory in favor of Jewish immigrants, starting with the Royal Commission of 1937 to the UN-endorsed partition plan of 1947 on which Israel’s legitimacy hangs by a thread.

The inevitable result would be to intensify the Palestinian struggle for freedom and against Israeli policies of racism and apartheid.

The scheme is of course a Zionist project. It violates international law, not only in reducing Palestinians remaining in their homeland to life in ghettos but it covers Palestinian territory which Israel illegally annexed and occupied beyond the Armistice Line of 1949. It incorporates Syria’s Golan Heights, which Israel occupied in 1967 andillegally annexed in 1981, as well as areas of Palestine acquired and/or occupied in violation of UN and Security Council resolutions and the armistice agreements of 1949.[3] Further, assuming Israel’s sovereignty is recognized by some countries, this does not mean that the land or property under its control are legally owned by Israel. Private ownership has a sanctity which is not diminished by occupation or passage of time. This is particularly applicable to the land and property of Palestinian refugees who were the victims of Israel’s ethnic cleansing.

Jewish ownership of land in Palestine under the British Mandate was 1,429 square kilometers, that is five percent of historic Palestine or seven percent of present-day Israel.[4] The rest is Palestinian property. The cantonization scheme deals with this confiscated Palestinian property (93 percent of Israel) as if it were Jewish owned. This violation of international law is ignored by the cantonization scheme. It deals with the land as if it was booty or war spoils to be divided among Jewish immigrants to Palestine.

There has in recent years been a revival of interest in a one-state solution in all of historic Palestine as the only practical and legal way to absorb Jewish immigrants among the native inhabitants of the country.

Whatever the ultimate solution may be, the fact remains that every person must have the free choice to return to his home or land and live in freedom under the rule of law. Colonialism, racism and apartheid have no place in our world today and must be irrevocably abolished. The Palestinian people today are twelve million, two-thirds of whom are refugees and their direct descendants, expelled from their homes in what is today Israel. Half of the Palestinians still live on Palestine’s soil. The rest are in a ring around in it, with the exception of about one million living further afield. If there is any lesson to be learnt in the last seven decades, it is that no peace can ever prevail in the region without the return of the refugees to their homes.

That, and only that, should be the subject of concern, study and implementation.

Images of Hunger and Humiliation: The Memory against Forgetting 12 hours ago

The Last Few Days in Kashmir 13 hours ago