'The British Origin Of Cow Slaughter In India' 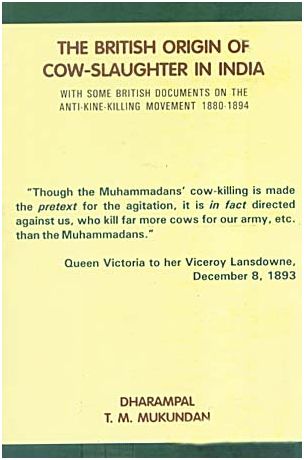 This is just one of the numerous verses by Maulana Hasrat Mohani, a Congress leader during the national movement, among the founders of the Communist party and member of the Constituent Assembly.

After his annual Haj, the Maulana always visited Mathura and Barsana for a “darshan” of Krishna and Radha. For combining Haj with Mathura, the Maulana had an explanation. God had sent his messengers to every land. For many of the Maulana’s persuasion, Lord Krishna was God’s messenger or incarnation in India.

“Many of my friends are so pleased when I visit Mathura.” He once told a friend. He did not visit Mathura to build up a constituency of admirers. But the fact that these visits pleased his friends was a source of great joy to him. In deference to the original cowherd, the Maulana never ate beef.

To my recollection, beef was never eaten in our home either. After Zamindari abolition, in 1951, austerity entered our lives. Mutton and chicken became an expensive proposition for family gatherings sometimes exceeding 50 during marriage, death and Muharram. Plenty of vegetables were tossed into a meat which was described (only in whispers) as “bara” or “big”. This was, without exception, “buffalo”. Consumption or mention of “beef” was taboo because it might “hurt” people who frequented our homes.

Tundey, Lucknow’s most celebrated Kebabchi for over 110 years, has two outlets for his Kebabs: the more expensive ones are mutton, cheaper ones are “bara” for which read buffalo.

Vigilante gangs out to terminate beef eating should visit fancy restaurants including ones in five star hotels and ask for the menu card. They may find “beef steak” listed, sometimes on “sizzling platters”.

A restrained line of action would be to send the steak to forensic laboratories which must soon begin to mushroom to cushion the current hullaballoo. All the “beef steak” samples will, without exception, turn out to be buffalo.

Anti beef agitators have clearly not come up the social ladder. Their more prosperous cousins choose not to look at their progeny drooling over beef steak at Smith and Woolensky in New York.

In a globalized world where our children are exposed to the blandishments of Angus steak in Britain and Kobe steak in Japan, can dietary restrictions really be mandated?

A valuable video clip in my archives shows Dara Singh, the original Hanuman of Bollywood, stepping out of Carnivore, the celebrated restaurant outside Nairobi, where Zebra, Wilderbeast, Giraffe, crocodile meat is among the less exotic fare roasted over a giant fire.

This may be a little extraneous to our theme. More to point might be the query: how did beef become the Muslim’s diet? It was not the staple diet in the places of origin of the Delhi Sultans and the Moghuls. They ate mutton, camel meat, chicken, fish, geese, antelope and other game. Also, contrary to the popular belief, they ate plenty of vegetable. How then did the converts, who constitute 80 to 90 percent of the Muslim population, develop a taste for cow?

Atal Behari Vajpayee invited famous Gandhian scholar, Dharampal, to research the origins of cow slaughter in India. Based on original British documents at India House in Britain, Dharampal and his assistant, T. M. Mukundan submitted, their study in 2002.

The title of the book gives the story away:

“The British Origin of Cow-Slaughter in India.”

Here was a situation custom made for the authors of Divide-and-Rule. British officers could easily point to the Muslim Qasai whenever Hindu-Muslim tensions were required.

Queen Victoria gave the game away in a note she wrote on December 8, 1893 to her Viceroy, Lord Lansdowne:

“Though the Muhammadans’ cow-killing is made the pretext for the agitation, it is in fact directed against us, who kill far more cows for our army, etc. than the Muhammadans.”

In a speech in Muzaffarpur, Gandhiji developed on this theme: “If we cannot stop cow slaughter by the British, we have no right to raise our hands against Muslims.”

The tradition of beef eating, established in the shadow of the British Raj, acquired its own momentum after the British left.

That was colonialism taking advantage of Hindu-Muslim tension.

Today a very political majoritarian project is beaming the search light on the Muslim as the Melecha, in the alley of beef eaters.

In this din, even Maulana Hasrat Mohani, who experienced the Divine in the Mosque as well as the Mandir, would have been on this side of a very bleak divide.