Kashmir Perspective: Which India Will Endure, Tagore's or Golwalkar's?

Whose India: Tagore or Golwalkar?

The word India usually evokes many images. Sometime back India was associated with Mahatma Gandhi, the colossal leader who is considered to be the father of the Indian Nation. India is also the land of Buddha, the apostle of non-violence. It is also the land of Tagore, the humanist poet. It is also land of Dr. Iqbal, the poet of the East. However, it is also the land of Golwalkar, the founder of the RSS (Rashtriya Swayamsevak Sangh), the extremist Hindu Organisation. Since its independence from the British, the Indian State claims to be a secular democratic republic. The situation on the ground has repeatedly belied these claims.

Rabindranath Tagore, popularly called “Gurudev”, the first non-European to win the Noble Prize in Literature in 1913 was a great humanist who reshaped the Bengali literature and music. The author of Gitanjali, with the most profoundly sensitive, fresh and beautiful verse elevates the human spirit to great heights:

“Where the mind is without fear and the head is held high; Where knowledge is free;
Where the world has not been broken up into fragments by narrow domestic walls;
Where words come out from the depth of truth;
Where tireless striving stretches its arms towards perfection;
Where the clear stream of reason has not lost its way into the dreary desert sand of dead habit;
Where the mind is led forward by thee into ever-widening thought and action ---
Into that heaven of freedom, my Father, let my country awake”.

Dr. Iqbal had dreamt of India as the best garden in the world and its people were the nightingales! Unfortunately, his dream turned sour due to the communal elements and he had to opt for a separate homeland for Muslims notwithstanding the fact that they are no better off there except no one prosecutes or victimizes them for being Muslims! On the other hand they are killing each other regardless of the fact that they all follow the same religion. 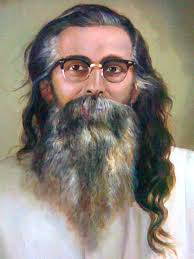 The one person who made all these dream visions fail is Madhav Sadashiv Golwalkar, also known as Shri Guruji. Golwalkar was the supreme leader of the Rashtriya Swayamsevak Sangh, He wrote, “Bunch of thoughts” and “We, or Our Nationhood Defined”. Narendra Modi has written a biographical profile of Golwalkar in his book, “Jyotipunj”. He considers Golwalkar to be one of his inspirations. RSS kept itself aloof from the anti-British Indian Independence Movement.

Golwalkar writes in his book, “Anti-Britishism was equated with patriotism and nationalism. This reactionary view has had disastrous effects upon the entire course of the freedom struggle, its leaders and the common people”. According to Rajeshwar Dayal, the Chief Secretary of the United Provinces in 1947-48, Golwalkar had planned to carry out a Pogrom of Muslims. Golwalkar in his book writes about non-Hindus : “The non-Hindu people of Hindustan must either adopt Hindu culture and language, must learn and respect and hold in reverence the Hindu religion, must entertain no idea but of those of glorification of the Hindu race and culture ... In a word they must cease to be foreigners, or may stay in the country, wholly subordinated to the Hindu nation, claiming nothing, deserving no privileges, far less any preferential treatment—not even citizens' rights.”

RSS is now giving practical shape to these ideas of Golwalkar through their nominee, Narendra Modi. Instead of realizing the dream of a progressive, secular and democratic country, they are taking India to Vedic times in a totally retrograde mode. India of Tagore’s dreams and vision seems to be disappearing fast and it is being replaced systematically by Gowalkar’s Pogrom of a fascist and regressive India of the savage times. A historian friend calls it the beginning of the end of India while a columnist friend calls it the “Unmaking of India”!

There has been resentment and resistance at the intellectual level. A number of intellectuals, artists, and other prominent citizens have shown their displeasure by returning state awards and honours. In fact, there has also been global displeasure about certain violent incidents. However, only intellectual resistance is not enough. The fascist onslaught has to be resisted by all the people at every level. While imagining the realization of the dream of Tagore elevates one’s soul to supreme heights, the mere thought of Golwalkar’s Pogrom sends shivers down one’s spine!

Which India will endure Tagore’s or Golwalkar’s? That is the big question right now!