The View From A New York Loft: The Devil's Own Choice

NEW YORK: The certainty of a Hilary Clinton victory had given way to anxiety as soon as the TV anchors began to concede that Donald Trump had taken Florida.

A dozen or so friends, who had assembled in Lucknow boy turned New Yorker, Nusrat Durrani's trendy DUMBO loft under the Brooklyn Bridge, did not have the heart to uncork champagne bottles. We were not sure which one of the Clinton supporters in the party might be offended, so shocking had been the trends fairly early.

Our adorable Jewish World Banker friend couldn’t bear to look at the screen. "I feel faint; I must leave." Another from the state department was on frantic long distance calls advising her family to prepare for the worst.

Trust a journalist, an honest senior back room boy with Fox News to be in total control of his nerves. Outside his 48th street and 6th avenue office, multimillion dollar arrangements had been made for victory celebrations. Fox News was supporting Trump. They were therefore unlikely to waste their wealth in preparation for a Clinton victory. The implication was that Fox, their tentacles deep in the Trump establishment, had a better sense which way the electoral cookie was crumbling. They had prepared for a Trump victory well in advance.

Our host, with his Lucknow versatility, a Kashmiri wife, and a committed New Yorker's (he is an art impresario) serious contemplation of the shock results, looked calm. But the way he consoled his wife, made his anxieties transparent. His white neighbour, banged frantically at the door, and barged in, beads of perspiration on her brow. She could not bear to watch the results alone. She needed to hold her neighbours hand. It was all too unnerving, the earth was moving from beneath people's feet.

Even though everyone in that volatile assembly saw the results according to their own lights, pockets of consensus were discernable among a group huddled in this corner, or another, speaking in whispers there.

One consensus is now a universal cliché: of the two bad choices, Clinton was more acceptable to folks raised on a daily diet of New York Times and CNN. The establishment, in other words.

Conversation zigged zagged to another point of agreement: the lasting contribution of Hillary Clinton to American public life, quite ironically, is Donald John Trump. Indeed, this has been the singular contribution of the entire US establishment. The sheer cockiness of it, leaves one quite breathless.

By eliminating Bernie Sanders, the American establishment, shifted the centre of gravity of electoral politics, way to the Right. In this arena, Trump exuded the aura of being the anti establishment outsider. On Hillary Clinton's shoulders, was placed the heavy yoke of being the establishment. Indeed she became the epitome of a double distilled establishment with Republicans and Democrats looking at her with cow eyes.

If people worldwide, on an almost revolutionary scale, were tearing down establishments, by what logic could a plausible case be built for a Clinton victory?

When Ahmad Shah Abdali's marauders were knocking at the gates of Delhi, the Moghul emperor uttered the famous lines, "hanoz "dilli doorast"- dilli is still far. Call it delusion; call it rank cockiness.

With confidence derived from convoluted logic, friend Surjit Bhalla, came out as his own town crier: Trump's victory would be the end of Western civilization. By contrast, Prof. Dinesh Mohan of the Indian Institute of Technology, echoed Mohammed Ali's refusal of the draft during the Vietnam war. "I've got nothing against them Vietcong."

Asked why he preferred Trump, Mohan was sharp and succinct: Trump never killed anybody. He was setting up the tycoon President elect against Hillary's callous hawkishness.

Americans are paying a price for keeping their focus willfully away from that frame etched indelibly on my mind. Half the split TV screen has a yelling Qaddafi being sodomized by a knife; the other half has Hilary's astonishing triumphalism, "I came, I saw, and he died".

McCarthyism was improved when hysteria was generated about Russian interference in US elections. Never was American democracy projected as being more vulnerable.

Yes, with Trump, the world enters a dangerous new phase. Strategists the world over may have to pour over new drawing boards. But is that such a hopeless prospect after the bleak and shoddy record of the past 25 years which have seen more war and mayhem than ever before. 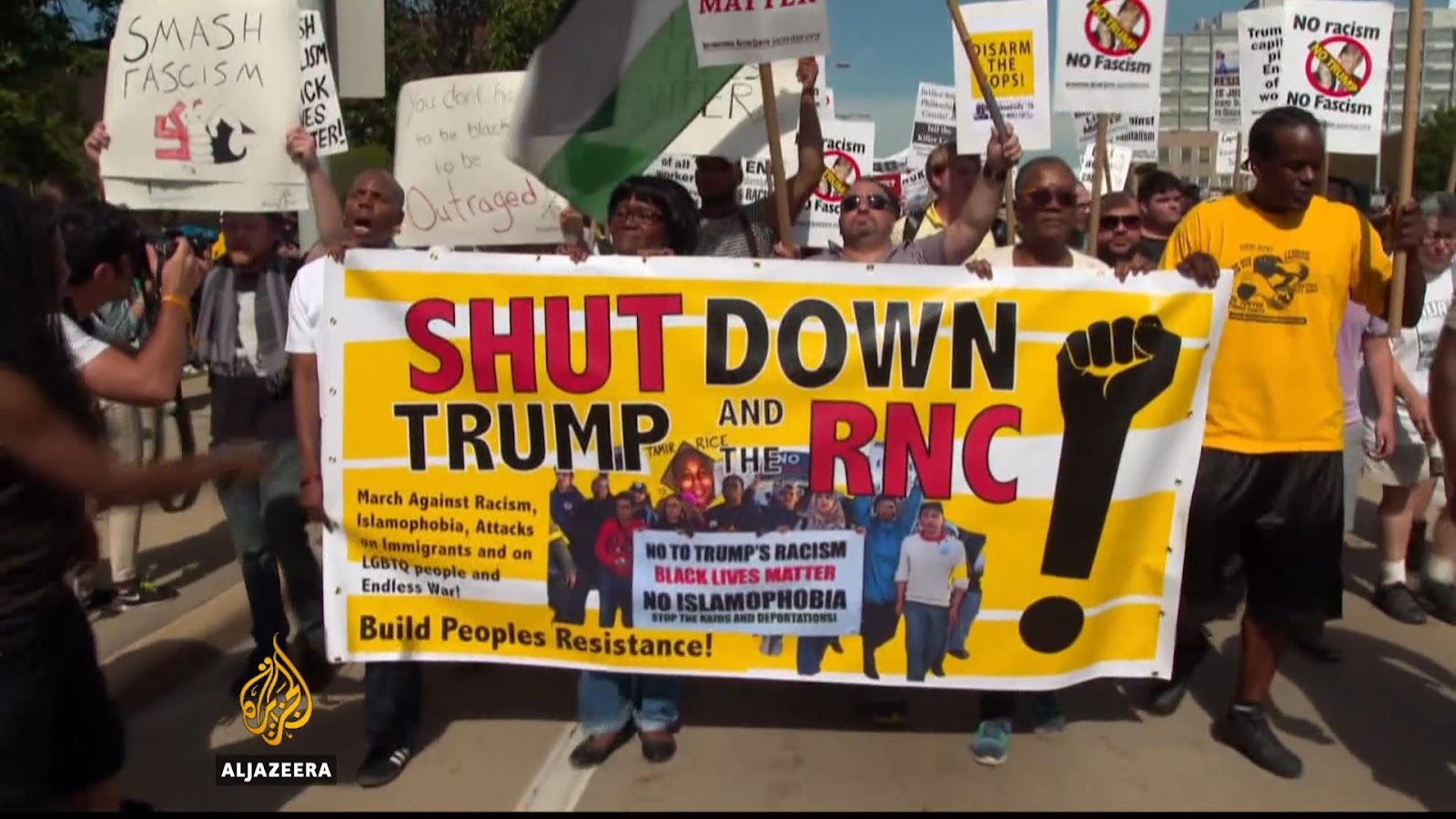 (Photographs of protests that broke out all across the United States against Donald Trump’s victory. Effigies of the President elect were burnt, with the cover photograph carried by the American media registering a demonstration outside Trump Towers in New York. The protestor stayed outside Trumps residence throught the night, and as CNN reported, raising slogans, even hurling abuse against the Republican candidate. Shock and dismay was expressed by demonstrators interviewed by US news television channels, making experts wonder whether the transition to the new Presidency would be peaceful and smooth in the wake of this resistance)