NEW DELHI: The recent media coverage of molestation of girls in Bengaluru, Delhi and elsewhere once again highlights the shameful attitude of hooligans, the inadequacy of police forces with or without being outnumbered, the nonchalance of some venerable political office holders with some giving idiotic advice as well, and the inefficiency of our justice system.

Going by one report of a 100 odd such offenders in Bengaluru alone, just about one gets punished.

The electronic media shows video clips of motor-cycle riding goons stalking a girl on foot, grabbing her, forcibly molesting her, and pushing her to the ground before taking off on their bike. Then you have photographs of a girl with part of her ear chopped off when she resisted the advance of goons during a bus ride in Baghpat.

Not that such actions are not commonplace any and every day in India – molestations, rapes, rapes followed by killing the victim(s), acid attacks, even goons attacking police, you name it. The ‘Nirbhaya’ saga has been repeated umpteen times over including in the national capital.

There have been instances when refuge is taken behind say more figures of rapes in the US compared to India. But is that the right approach rather than looking at and streamlining what needs to be done – for example, the lighter punishment for so called ‘juveniles’ who going by reported figures are responsible for larger number of rapes in India compared to adult offenders.

Outrage displayed on such occurrences when highlighted by the media boils over after some time, only to be repeated when similar acts are in the media glare again. This is an endless cycle repeated over years and decades, to which the nation is mute witness.

This time you have had film stars, the Indian cricket team captain and some other personalities exhibiting their anger over the state of affairs on the social media. Bollywood actor Akshay Kumar rightly commented that some of these goons are seen behaving worse than animals. So, given the fact that the existing state of affairs of law and justice are unlikely to improve, where do we go from here?

If we have goons behaving like animals then given our advances in medical science, why don’t we examine if we can tranquilize them, with the police using dart guns that are easy to carry and handle.

For thousands of years tribal people have used poisoned arrows to incapacitate animals before killing them. But now a range of rifles, darts, and pistols are available. On impact, the momentum of a steel ball at the rear of the dart pushes the syringe plunger and injects the dose of barbiturate or other drug into the body of the target. This makes the target sleepy, slowing him down till he collapses and can be captured. The gun is quiet, and there is usually a valve on the gun to control the dart velocity.

True, tranquilizing agents don't affect everyone uniformly and take time to enter the bloodstream and take effect. But how about conducting research on the subject? If we went all out to try out Pava Shells because of the furore against pellet guns use in J&K, how about looking for / developing appropriate tranquilizer darts for the molester brigade brigands running loose pan India?

The mere sight of tranquilizer dart guns with the police should inhibit some of the potential molesters. No doubt the mere mention of tranquilizers will get the human rights groups going ballistic, but this is perhaps warranted if we are not to remain fixated in the existing time wrap.

Much has been written about imparting self defence training to girls and such calls would br more with ‘Dangal’ running to packed theatres. It sure is good but then plenty self-defence gadgets are available abroad for women.

These include pepper sprays in small cans, capsules, even disguised as lipsticks. Of course, the spray needs to be directed to the eyes of the attacker. . Most pepper spray victims instinctively fall immediately to their knees and start rubbing their eyes (which makes it worse). The pain has been described as two red-hot pieces of steel being pushed into your eyes and a blow-torch applied to your face. Such gadgets can be made available en masse, even subsidized as possible, and their use publicized.

Another gadget available abroad and which can be purchased on-line, is called the ‘Tiger Lady’, which is more aggressive than pepper spray and easy to carry.

It gets its name from the sharp, feline-like claws that extend out with a squeeze of the hand. These claws contain grooves at the bottom, which capture DNA from an assailant through mere scratching, making it possible for a woman to defend herself, get away and produce evidence to find her attacker.

It is portable, weighing less than two ounces and can fit inside almost anything, including a pocket. Women do not need any training in order to own and operate the device since it requires no strength or special skill to use. Though Tiger Lady is non-lethal, it is effective and requires no strength, skill or training:

Finally, with so much of persistent calls for optimizing technology, we should also be looking at something like the Defender 24/7TM Smart Personal Protection System available abroad that also alerts the Law Enforcement and Medical authorities (http://www.getthedefender.com/).

The Defender’s integrated camera with flash connects ‘wirelessly’ to the Defender’s iPhone and Android app, sending the photo of the attacker to the proper authorities while the small, but very loud siren attracts attention to the situation. 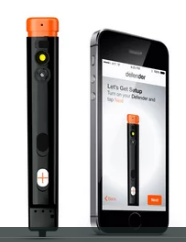 The question of course is that in the hysteria of elections, demonetization and what not, will an issue like this have any takers? Will even the media, women’s rights groups or the officialdom bother?