ISLAMABAD: The youngest Nobel Laureate Malala Yousafzai asks her fellow laureate Myanmar’s Augn Saan Suu Kyi to break her silence, and speak out against the “tragic and shameful” butchering of Rohingya Muslims by the Myanmar forces. 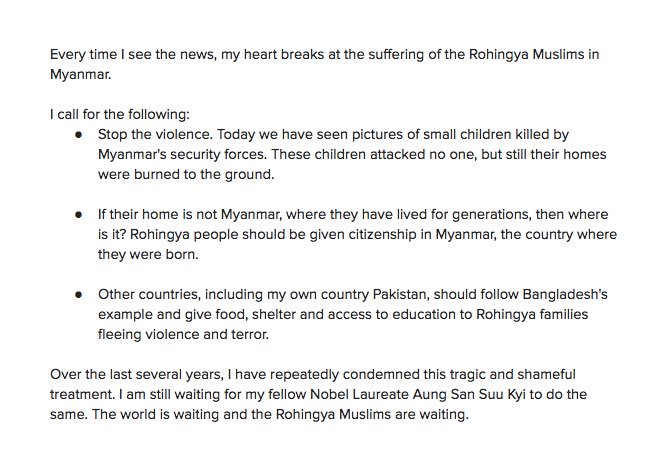 The Myanmar Army, in a fresh wave of terrible violence, has left hundreds of Rohingya dead even as thousands fled into the rivers where many have drowned. The Bangladesh forces have been pulling out dead bodies from the waters. Entire villages have been set on fire, with the hapless community trapped along with civilians in the Rakhine state. Myanmar has now refused permission to the United Nations to rush relief supplies to the area, where the people are without basic food and medical supplies.

Those who have managed to enter Bangladesh are sharing ghastly stories of the attack on the community by the Buremese soldiers, who raided their homes, set their hutments on fire, with Myanmar clearly following a policy to terminate this 1.1 million ethnic minority.

India has also announced its intention to ‘deport’ the Rohingya families who have taken refuge here. This has created tremendous fear in the 40000 Rohingya sheltering here, as clearly deportation means death in the Myanmar context.