Spokes in the Wheel of Maldivian Opposition Unity

Much was expected of the positive steps taken in late June to unify the Maldivian opposition for ousting the entrenched President Abdulla Yameen in the September 23 Presidential election.

The withdrawal of former President Mohamed Nasheed from the race because he is legally barred from contesting, led to the nomination of senior Maldivian Democratic Party (MDP) parliamentarian, Ibrahim Mohamed Solih, as the MDP/Joint Opposition candidate.

It had also been agreed that the other major opposition party, the Jumhoory Party (JP) led by Gasim Ibrahim, would nominate the Vice Presidential candidate, referred to as “the running mate”.

But come July, cracks appeared in the Joint Opposition and within constituent parties too.

There are disagreements over the common manifesto approved by the MDP , the largest in the coalition. There are also differences in the JP over the likely nomination of Aishath Nahula, Gasim’s Ibrahim’s youngest wife, as Solih’s running mate. There are other aspirants too for that position.

The Islamist Adaalath Party (AP) has said that it will be “extremely difficult” for it to accept a woman as the running mate who would rule the 100% Islamic country in the absence of the President.

Solih himself has expressed reservations about his running mate being a woman. Thus ,it appears that few want to upset the Islamic conservatives who are the majority in the electorate.

Within the MDP too, there is confusion over the commitment to candidate Solih because Nasheed had handed the candidature to Solih on the condition that if, even in the last moment, the ban on him is lifted, Solih will step down in his favor.

Nasheed is said to have included this clause because he was unsure about Solih’s stepping down after 18 months which the MDP election manifesto would expect him to do.

It is recalled that in 2008, ahead of the first democratic Presidential election in the Maldives, Nasheed had made a promise to the other parties in his group, that a fresh Presidential election would be held after dictator Mamoon Abdul Gayoom is defeated by the united opposition. But after he defeated Gayoom, Nasheed conveniently forgot about the promise. He had said that a fresh election would be held in one and a half years. But did’nt carry out the pledge.

Nasheed has been barred from contesting the 2018 election because he is yet complete his 13 year prison sentence for terrorist activity. He left prison on medical parole ,went to the UK and got political asylum. But Nasheed hopes that even at the eleventh hour, President Yameen might yield to international pressure, release him and lift the ban on his contesting elections. 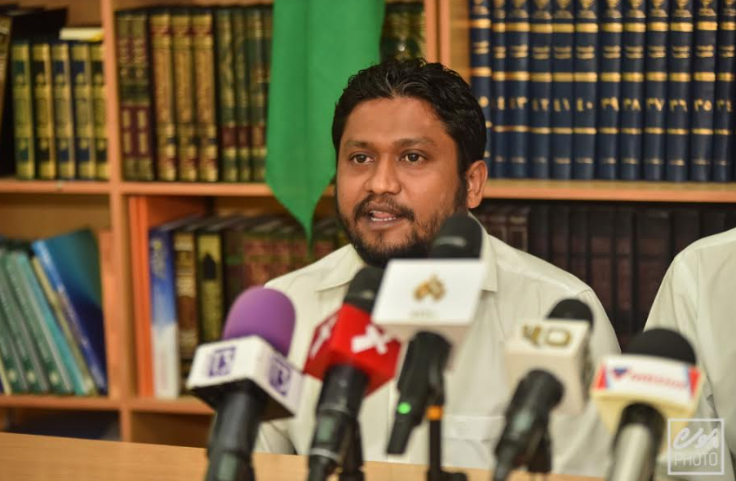 He believes that a lifting of the ban is entirely possible if the US, EU and India step up pressure on Yameen. Sure enough, India came out with a statement on Thursday, asking Yameen to restore democracy.

The Spokesman of India’s External Affairs Ministry Raveesh Kumar said that India has been “closely monitoring” the situation in Maldives, and added that “the announcement of elections in the Maldives comes at a time when democratic institutions including the Majlis (parliament) and the judiciary are not allowed to function in a free and transparent manner. This is indeed a matter of concern."

The possibility of the ban on Nasheed being removed could stymie Solih’s campaign. The commitment of support to him may wane, if his candidature is in doubt.

On Wednesday, the Jumhoory Party (JP) appeared to disagree with the on the MDP-drafted opposition manifesto. Some of JP’s 11 pledges, which the JP leader Gasim Ibrahim had made, differ in some key respects from the MDP’s manifesto. There are differences over allowing foreign judges to probe domestic matters, and on changing the Presidential system to a parliamentary one.

Gasim had also proposed that the Maldives rejoin the Commonwealth which it quit in 2016 and lift the age cap on Presidential candidates to enable him to contest, a bar which had been put into law with the support of all parties including the JP and MDP.

And now there is the issue of a woman running for the Vice President’s office when the lady in question is Gasim’s wife. It would be an issue easy to resolve as Gasim is a powerful and determined man and, being a business tycoon, will be the main financier of the opposition campaign.

Clearly, there has been a lack of consultation among the opposition parties before deciding on important matters like the candidates and the joint manifesto.

While the opposition is still to sort out its leadership issues, the ruling Progressive Party of the Maldives (PPM) led by President Yameen has been campaigning, having announced that Yameen would be its candidate long ago.

The President has been hopping from atoll to atoll inaugurating water supply, other infrastructural and welfare schemes. He has asked the Chinese to complete the bridge between Male and Hulhumale in August. Huhumale has a massive Chinese-built housing scheme. He has inaugurated new flights between the islands to link them with each other and with Male.

Wherever he goes, Yameen stresses his contribution to improving infrastructure. He describes the opposition’s dependence on foreign powers to overthrow his government as an “anti-national mindset” which goes against the grain of Maldivian nationalism. He criticizes the opposition’s dependence on Western liberal democracies, which want the 100% Muslim Maldives to allow non-Islamic places of worship, and non-Islamic cultural practices like same sex marriage.

To defend the national interest, Yameen’s government has brought in a law to bar people who have, or had dual citizenship or who had got political asylum in a foreign country.

Even if these people had surrendered their foreign nationality or had given up foreign asylum, ten years would have to pass before they can become eligible to fight elections in the Maldives.

Explaining the reason for this restriction, a source in the ruling PPM said: “ Many rich Maldivians take foreign citizenship and live abroad for many years and then parachute into Maldives to become an MP or the President, throwing money to find their way through the system.We want people who have stayed put in this country, interacted with and served the people to be our MPs or our President.”

However, the law was passed in an unusual way. The ruling party did not have the 43 MPs needed to pass the bill. It had only 35 out a total House membership of 85. Therefore it used an earlier Supreme Court ruling which allowed bills of national importance to be passed without the required majority using the “Doctrine of Necessity”.

The opposition too was at fault. It was not present in the House. For a long time, it has been boycotting parliament in protest against Yameen’s road-rolling tactics. In the process, it has also contributed to the weakening of parliament as an institution in the Maldives.