NEW DELHI: Satellite images revealed this week suggest that Pakistan may have rendered operational a fourth heavy water reactor at Khushab nuclear site. If true, Pakistan will now be able to build a larger number of miniaturised plutonium-based nuclear weapons.

The satellite images were analysed by a US think tank Institute for Science and International Security, whose members, David Albright and Serena Kelleher-Vergantini, said, “A recently purchased Digital Globe high resolution satellite image dated January 15, 2015 shows that Khushab's fourth reactor's external construction is complete and has become operational.” "This assessment is based on the presence of a very specific signature: steam is venting from the reactor's cooling system.” 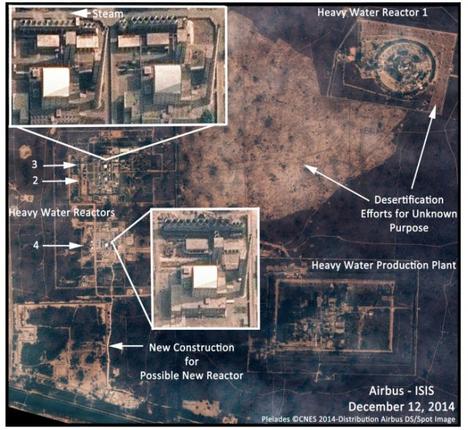 This report follows a report released by US-based Council for Foreign Relations last year that had concluded that Pakistan has the fastest-growing nuclear program in the world.” “By 2020, it [Pakistan] could have a stockpile of fissile material that, if weaponized, could produce as many as two hundred nuclear devices,” the report notes.

Toward this -- specifically in regard to the Khushab reactor complex, the Institute for Science and International Security noted that the complex was originally constructed and became operational in the 1990s, as primarily a heavy water production plant and an estimated 50 megawatt-thermal heavy water reactor. Following the nuclear tests conducted by India and Pakistan in 1998, Pakistan initiated the construction of a second heavy water reactor at the complex between 2000 and 2002. A third one followed in 2006 and a fourth one in 2011.

In tracking satellite images through 2011 to the end of 2013, the think tank was able to conclude that the fourth reactor’s external structure was near completion, and four of the six auxiliary buildings in reactors two and three “appear complete.”

The think tank also cautioned that there seems to have been a clearing of space to make way for a fifth reactor, although no definite assessment on this was possible.

Given the volatile relationship between India and Pakistan, any news that Pakistan is accelerating its nuclear programme will bring with it further tensions. The CFR report had rightly noted that South Asia is the region “most at risk of a breakdown in strategic stability due to an explosive mixture of unresolved territorial disputes, cross-border terrorism, and growing nuclear arsenals.” “Due to the security trilemma, the deterrence relationship between India and Pakistan is intertwined with that of China. This trilateral linkage increases the region’s susceptibility to outside shocks and amplifies the risk that regional developments will have far-reaching effects. Each of these dynamics is worrisome on its own, but the combination of them could be particularly destabilizing,” the report had said.

In light of the above, how safe is Pakistan’s nuclear programme?

1. The Kamra Air Base attacks

Firstly, we do not know for certain that the air base housed nuclear weapons, but let’s assume that it did. The incident received widespread attention as it indicated that Pakistani militants had plans to acquire nuclear weapons, if not covertly through proliferation networks, then through armed theft. The nine attackers who targeted the air base probably had no intention of recovering any nuclear material or substantial military equipment; they were wearing suicide vests which is a clear indication that they did not plan to leave the base alive. Further, if they did plan to successfully recover weapons, they would have probably sent more than a nine-person team to a heavily guarded military base.

While risks and concerns remain given Pakistan’s instability and the proliferation of militancy in the country, weapons falling into the hands of non-state actors is unlikely. This confidence has been reiterated by many. US General Petraeus stated on May 10, 2009, that “[w]ith respect to the—the nuclear weapons and—and sites that are controlled by Pakistan … we have confidence in their security procedures and elements and believe that the security of those sites is adequate.” James Clapper, Director of National Intelligence in the US, told the House Intelligence Committee February 10, 2011, that “our assessment is that the nuclear weapons in Pakistan are secure.”

Pakistan has reformed the institutions charged with the task of ensuring the safety of nuclear arsenal. The Pakistan government has reiterated that warheads are kept separate from detonation mechanisms and warhead cores separate from their firing mechanisms. Keeping the components separately limits the ability of non state actors to acquire a weapon and increases the number of materials required. Pakistan has also set up a permissive action link (PAL) system, where two members of the military and the most senior civilian leaders have codes that must be entered simultaneously to approve the use or deployment of nuclear weapons. The the security and safety of Pakistan’s nuclear forces rely on three institutions: The National Command Authority (NCA), the Strategic Plans Division (SPD), and the Strategic Forces Command (SFC). The final authorisation to employ a nuclear weapon must go through the head of the NSA - the Prime Minister of Pakistan. The Director General of the army is the secretariat for the NCA, and each branch of the military has its own SFC.

Risks and vulnerabilities do remain, but former President Musharraf has summed up the situation when he told the CNN in 2011 that “If Pakistan disintegrates, then it can be dangerous. Otherwise, if Pakistan’s integrity is there... there is no danger of the nuclear assets or strategic assets falling in any terrorist hands.”

Although AQ Khan’s admission of running a procurement network corroborates a worry well expressed by Yuri Korolev, a member of the Russian Foreign Ministry, who said, “There are 120,000-130,000 people directly involved in Pakistan’s nuclear and missile programmes… There is no way to guarantee that all are 100 [percent] loyal and reliable,” Pakistan’s improvements in safeguards demonstrate its commitment to addressing security concerns.

Firstly, the network set up by AQ Khan seems to have been dismantled, with a 2009 US State Department release saying that the network “is no longer operating.” Pakistan’s Foreign Office stated February 7, 2009, that Pakistan “has dismantled the nuclear black market network.”

Pakistan has also taken a number of steps to prevent further proliferation of nuclear-related technologies and materials. In 2004, a new national exports control legislation was adopted. This includes a control list for “goods, technologies, material, and equipment which may contribute to designing, development, stockpiling, [and] use” of nuclear weapons and a catch-all clause which requires exporters to notify the government if they are aware or suspect that goods or technology are intended by the end-user for use in nuclear or biological weapons, or missiles capable of delivering such weapons.

Once the UTN’s work with Al-Qaeda on biological weapons and rudimentary nuclear weapons technology came to light in 2001, Pakistan changed its personnel security policy. It developed a personnel reliability programme to scrutinise individuals working with nuclear weapons in the country and the 2007 National Command Authority Ordinance includes measures to prevent the transmission of nuclear expertise. Pakistani officials participating in an April 2007 Partnership for Global Security workshop argued that Islamabad had improved the reliability of its nuclear personnel by, for example, making security clearance procedures more stringent.

In conclusion, Pakistan is acutely aware of the threat to its nuclear programme posed by non-state actors, the political instability in the country, and even the risk of the escalation of hostilities with its neighbour, India. As stated by Shashindra Tyagi, former chief of staff of the Indian Air Force, “The Pakistani establishment understands the threats they face better than anyone, and they are smart enough to take care of it.”