The New 'Biebis' From Lahore Belt out Justin Bieber's 'Baby'

NEW DELHI: Life has changed for 15-year-old Saania and 13-year-old Muqaddas Tabaydar from a poor neighbourhood on the outskirts of Lahore, Pakistan. The two girls have become internet sensations of sorts after a video of them singing Justin Bieber's song Baby -- with their mother doing background beats on a pot -- went viral.

The girls, from a poor family, dropped out of primary school and do not speak English. They heard the song and took to its catchy beat, transcribing the words in Urdu and coaching each other on lyrics and melodies. After the video went viral, they were picked up by local television channels and covered widely in national and international media.

"We've been singing since we were very young - many members of our family sing too. We know all sorts of Pakistani and Bollywood songs," Saania told the BBC. "But we especially love Justin Bieber songs because they touch our hearts. "When we heard Baby, we started dancing and jumping around and we just lost ourselves to it," she added.

Her sister Muqaddas said they have both listened to the song about 70 times. "When I heard the song I forgot to eat or drink. I was just listening. I kept practising and practising until I learned it by heart. This song has been really lucky for us because we've now become famous!"

"We really didn't expect all of this to happen to us, to be famous like this. Because of this video we got on a plane for the first time and we've been on TV. That's always been our dream,” the girls told the BBC.

"I still can't believe all of this happened to my daughters, all thanks to Justin Bieber. I like him a lot. I feel he's like my son,” the girls’ mother, Shahnaz Tabaydar said.

"Our biggest wish, though, is to meet Justin Bieber and to sing with him,” the family said.

To dreams coming true (and judging by the response to these girls, the success is well deserved). 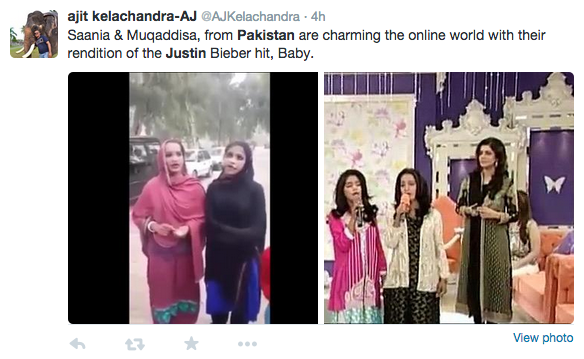