NEW DELHI: On the same day that Prime Minister Narendra Modi issued a greeting to Pakistani counterpart Nawaz Sharif, reiterating that all outstanding issues can be solved through “bilateral” dialogue, Minister of State (External Affairs) Gen V K Singh (retd) kicked up a storm with a series of tweets following his attendance at the Pakistan National Day reception.

Singh attended the event at the Pakistan High Commission as the Indian government’s representative, and although the Tweets make no direct reference to the occasion, they seem to clearly indicate displeasure. The event was also attended by several Kashmiri separatist leaders including Mirwaiz Umer Farooq, Syed Ali Shah Geelani and Yaseen Malik.

"The government of India had to sent an MoS. They sent me and I went there and came back," Singh told a reporter.

The Tweets speak for themselves: 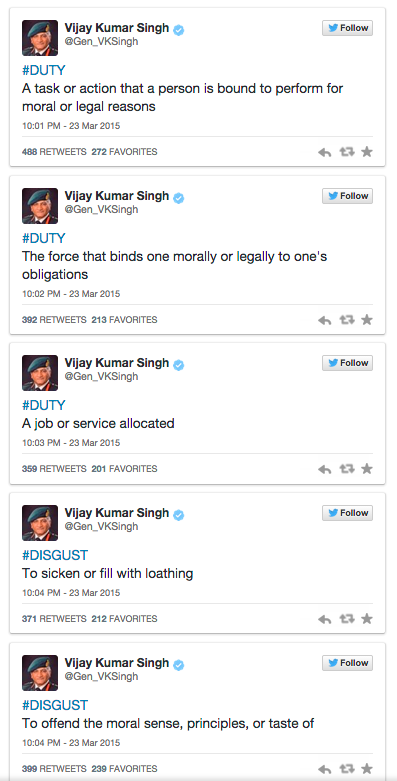 Singh reportedly spent very little time at the event, posing for a photo-op and standing in attendance for the national anthem of the two countries, before leaving.

It has also been standard practice for Pakistan to invite Hurriyat leaders to the reception.

The damage though, has already been done, with criticism on Singh’s comments mounting from political factions. Congress leader Manish Tewari on Tuesday tweeted that if Singh is so disgusted with double standards of his own government on Pakistan, he should quit.

"When duty becomes a burden, the honourable thing to do is to put in your papers. After all, he was worn a uniform and knows what Pakistan has done over the past two decades: sponsor terrorism. He is under no obligation to perform a duty which disgusts him," Tewari later told a news agency.

Janata Dal (United) leader KC Tyagi said that the common minimum programme of the PDP-BJP government in Jammu and Kashmir includes dialogue with the Hurriyat as one of its points. " VK Singh is wrong. The Jammu and Kashmir government's common minimum programme includes a provision to hold talks with the Hurriyat, as well as with Pakistan," he said (as quoted by Zee News).

The government, however, responded to Basit’s remark saying, “The government of India prefers to speak for itself.” Ministry of External Affairs spokesperson Syed Akbaruddin said,”There should be no scope for misunderstanding or misrepresenting India’s position on the role of the so-called Hurriyat. Let me reiterate there are only two parties and there is no place for a third party in resolution of India-Pakistan issues.”

Pakistan’s interaction with Hurriyat leaders has been a bone of contention between India and Pakistan, with India having cancelled secretary-level talks -- that had been agreed to during Sharif’s visit for PM Modi’s inauguration ceremony -- over Pakistan’s decision to meet Kashmiri separatist leaders in August last year.

Relations between the two countries, however, have seen an upswing in the last month as Indian Foreign Secretary, S. Jaishankar, arrived in Islamabad early March. Although the visit was part of a “Saarc yatra,” analysts believe it was a clever diplomatic ploy to kickstart a dialogue process with Pakistan. Having suspended talks in August, the Saarc yatra provided the diplomatic rationale for the FS to visit Islamabad, without India having to retract from its position that it will not tolerate Islamabad drawing Kashmir into the fray.

Meanwhile, however, the two countries remain engaged in a border skirmish along the Line of Control, with each side blaming the other for violating the ceasefire.