Pakistan-China Think Tank 'Randi' Brings Out The Best (Worst?) In The Social Media

What's in a name?

NEW DELHI: As Chinese President Xi Jinping unveiled a $46bn investment plan in Islamabad with the focus of spending being a 3000 km long China-Pakistan Economic Corridor (CPEC), the attention has fallen on another related area of cooperation. Pakistan and China have announced that they will be setting up a think tank to oversee the development of the economic corridor -- a network of roads, railway and pipelines, the cost of which exceeds US spending in Pakistan. The name of the Think Tank is Research and Development International aka RANDI -- causing an uproar across social media.

Users took to Twitter to voice their humorous opinions, a collection of which are posted below: 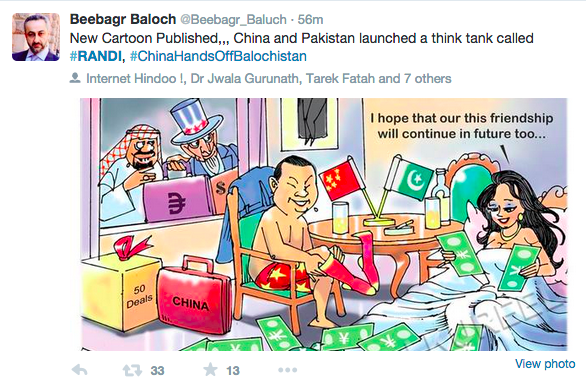 Xi arrived in Islamabad on Monday on a two-day visit, where he and Pakistani Prime Minister Nawaz Sharif oversaw their ministers signing 51 deals. Upto $28bn of the total $46bn investment is ready to be rolled out, and an estimated $37bn of the total will be spent on Pakistan's troubled electrical grid.

Ahsan Iqbal, the Pakistani minister overseeing the plan, told the AFP news agency that the investment related to deals that were "very substantial and tangible projects which will have a significant transformative effect on Pakistan's economy.”

The corridor, in turn, will connect China to the Indian Ocean and beyond, marking a major advance in the country’s plans to extend its influence across South and Central Asia.