NEW DELHI: A siege on a guesthouse popular with foreigners in Kabul, Afghanistan has ended, with at least eleven persons confirmed dead. The count could be more, as an exact assessment officially was awaited at the time of writing. The Indian ambassador to Afghanistan posted on Twitter “unfortunately a few Indian casualties among others at the Kabul g/house attack today.” Four Indians are so far reported to be amongst the dead. 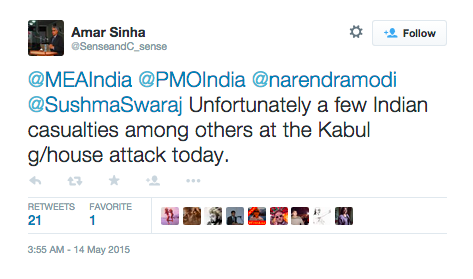 The details are still sketchy but reports indicate that the gunmen stormed the guesthouse at about 830 PM local time on Wednesday. The guesthouse is located in an area known as Kolola Pushta that is home to U.N. compounds and a foreign-run hospital, and is itself frequented by foreigners. The Indian embassy is also located nearby.

Qadam Shah Shaheem, commander of the Afghan National Army's 111th Corps said that a musical recital was to take place when the attack happened. “Today, there was going to be a music concert there. Fortunately, most guests had not arrived yet," Shaheem said.

The Taliban has claimed responsibility. As reported in The Citizen earlier, the Afghan Taliban had kicked off their annual “spring offensive” a few weeks ago -- referring to a spate in violence that is linked to better weather. Recent attacks within a span of a week have included an attack that killed 18 police personnel in the northeastern province of Badakhshan and an attack on a bus carrying government employees that killed three in Kabul.

The insurgents have already stepped up attacks in the preceding weeks, with a suicide blast outside a bank in Jalalabad killing 33 people on April 18. Although the Taliban denied responsibility for the Jalalabad attack, the group claimed earlier killings in a wave of attacks coinciding with the drawdown of foreign troops. The insurgents slaughtered over 30 soldiers, eight of whom were beheaded, in Afghanistan’s northeastern province of Badakhshan.

The declaration of the summer offensive follows news of a peace dialogue between the Taliban and the Afghan government. Afghan President Ashraf Ghani recently said "the grounds for peace have never been better in the last 36 years,” as reports indicated that the Taliban -- for the first time in 13 years -- had, under the pressure of Pakistan, agreed to peace talks with the Afghan leadership.

The timing was important as the reports emerged before the start of the summer fighting season, sparking hope that Afghanistan could be witness to a more peaceful summer as Taliban insurgents enter a dialogue process and foreign troops depart.

However, the dialogue seemed set to fail before it even commenced. One reason for this was the White House’s announcement that the United States will maintain its current 9800 troops in Afghanistan through the end of 2015, as opposed to an earlier plan of cutting the number to 5500. The Taliban reacted sharply to the statement with Taliban spokesman Zabihullah Mujahid saying, “This damages all the prospects for peace … This means the war will go on until they are defeated.”

Although the US’ announcement no doubt contributed to the talks failing, other factors would have also made the talks a difficult proposition. For one, the rift between the top two leaders of the militant group. The two in question are political leader Akhtar Mohammad Mansour, who favors negotiation, and battlefield commander Abdul Qayum Zakir, a former Guantanamo Bay detainee, who opposes any dialogue with the Afghan leadership. Sources state that the two met recently to address their personal differences, but no headway could be made on the issue of talks, with Zakir of the view that the Afghan government was illegitimate and that real power remained with the US any way.

The announcement of the change in plans of troop withdrawal tilted the position in favour of Zakir, with the Taliban command being clear from the start that the removal of foreign troops would be one of the prerequisites for the commencement of talks.

The losers here are -- as always -- the people of Afghanistan, as civilian casualties continue to rise. The UN Mission in Afghanistan has said that the number of civilians killed or wounded in the troubled country climbed by 22 percent in 2014 to reach the highest level since 2009.

If this latest attack is anything to go by, the situation in Afghanistan is only going to get worse.