PESHAWAR/UNITED NATIONS(IPS): It has been ten months since a group of gunmen raided the Army Public School in Pakistan’s northern Khyber Pakhtunkhwa (KP) province, killing 145 people, including 132 students.

For the most part, the tragedy has faded off international headlines, but for the families of the victims and survivors, the memory is as fresh as the day it happened.

Speaking to IPS in her home in Peshawar, KP’s capital city and the site of last year’s attack, Shahana Khan cannot stop weeping.

Her 15-year-old son Asfand, a tenth grader at the public school, was one of too many children killed by members of the Tehreek-e-Taliban Pakistan (TTP) on Dec. 16, 2014.

“Since he died, there has been complete silence in our home,” she manages to say through her sadness. “Nobody wants to speak. Asfand used to crack jokes and spread laughter – now he has left us, there is nothing to say.”

The boy’s father, Ajun Khan, chimes in: “He kept our home happy. Without him, we will pass Eid al-Fitr [the religious holiday marking the end of the holy month of Ramadan] in tears.”

His 11-year-old sister and seven-year-old brother share similar sentiments. Like other kids who lived through the tragedy, they have aged beyond their years.

They recount stories of their brother’s jokes and antics, as though momentarily forgetting that he is no longer with them. But then the tears start rolling again.

“I will recite the Holy Quran on his grave, and pray for his blessings,” the little bow vows solemnly.

Neither the kids nor their parents mention the school where the shootings took place, although it re-opened just a month after the incident.

For months, many families were too afraid to return to the scene. Though the students have gradually begun trickling back into their classrooms, fear is everywhere.

This lingering trauma is just one more obstacle standing between the Pakistan government and its ambitious education goals for this South Asian country of 182 million people.

Images of their dead or wounded classmates live on in the memories of students from the Army Public School in Peshawar, Pakistan, even seven months after the massacre. Credit: Ashfaq Yusufzai/IPS 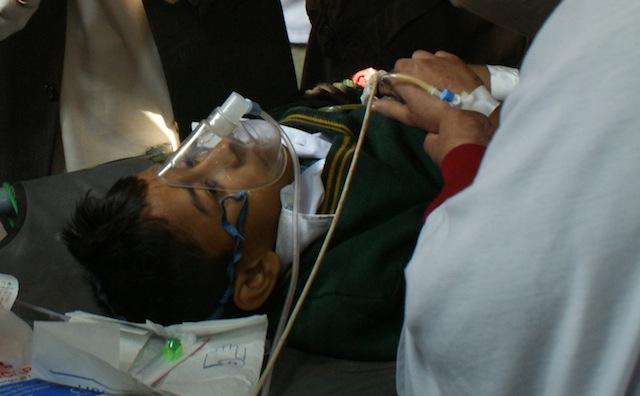 Throughout the decade of the Millennium Development Goals (MDGs), the U.N.’s landmark poverty-reduction plan launched in 2000, Pakistan has lagged behind most member states.

In March the ministry of federal education and professional training published education statistics for 2013-2014, which revealed that the government was unlikely to meet the target of achieving universal primary education by the end of 2015, despite many pledges and promises on paper.

Pakistan’s education sector is comprised of over 260,000 schools, both public and private, where 1.5 million teachers attend to an estimated 42.9 million students.

But according to the Pakistan Education for All 2015 Review Report, published together with the U.N. Educational, Scientific and Cultural Organisation (UNESCO), there are also 6.7 million out-of-school children in the country, one of the highest rates in the world.

And while 21.4 million primary-school-aged children are currently enrolled in public and private institutions, research suggests that only 66 percent will survive until the fifth grade, and a further 33.2 percent will drop out before completing the primary level.

Experts say that the dismal state of education in the restive northern provinces is largely to blame for these setbacks. 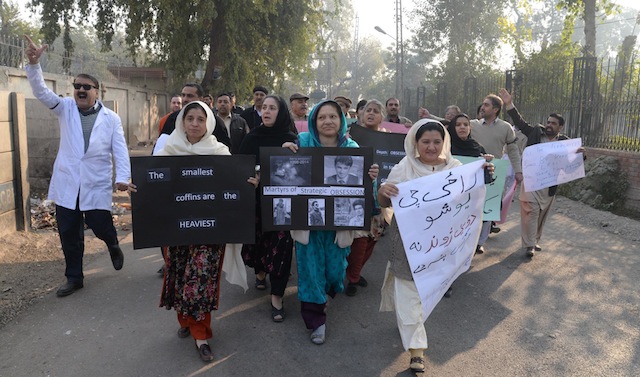 Women hold signs at a rally following the deadly attacks on a public school in the northern Pakistani city of Peshawar, which left 132 students dead. Credit: Ashfaq Yusufzai/IPS

Umar Farooq, an education official for the Federally Administered Tribal Areas (FATA), told IPS that about 200,000 boys and girls in his region are out of school, largely due to the Taliban’s systematic attack on modern, secular education.

In the past 12 years, the Taliban have destroyed 850 schools, including 500 schools dedicated exclusively to girls, he said.

“FATA has the lowest primary school enrollment rate in the whole country – only 35 percent,” he added.

Prior to the December 2014 public school shooting, a report published by the Global Coalition to Protect Education from Attack listed Pakistan as one of the most dangerous countries in the world to be a student or teacher, on par with states like Afghanistan, Colombia, Somalia, Sudan and Syria.

Between the review period starting in 2009 and ending in 2012, armed groups in Pakistan attacked some 838 schools, mostly by blowing up buildings.

Ishtiaqullah Khan, deputy director of the FATA directorate for education, told IPS that school enrollment and dropout rates have fluctuated according to ebbs and flows in the insurgency.

The period 2007-2013, for instance, when the Taliban was stepping up its activities in the region, saw the dropout rate touching 73 percent.

Citing government records, Khan said that some 550,000 kids in FATA have sat idle over the last decade. The numbers are no better in other provinces in the north.

Back in the summer of 2014, when a government military operation aimed at destroying armed groups drove nearly half a million people from their homes in the North Waziristan Agency, scores of children found their education interrupted as they languished in refugee camps in the city of Bannu, part of the KP province.

A rapid assessment report carried out by the United Nations in July 2014 revealed that 98.7 percent of displaced girls and 97.9 percent of the boys from North Waziristan were not receiving any kind of schooling in camps for internally displaced persons (IDPs).

The U.N.’s Office for the Coordination of Humanitarian Affairs (OCHA) warned that an already weak primary school enrollment rate of just 37 percent in KP (31 percent for girls and 43 percent for boys) would worsen as a result of the massive displacement, since 80 percent of some 520,000 IDPs were occupying school buildings.

Director of education for KP, Ghulam Sarwar, told IPS the Taliban had destroyed 467 schools in the province in the last decade, and reduced the schooling system to dust in the Swat District where the 2012 shooting of Malala Yousafzai shocked the entire world.

Already traumatized from years of attacks on education, the lingering ghosts of the Dec. 16 tragedy have only added to the burden of students and parents alike. 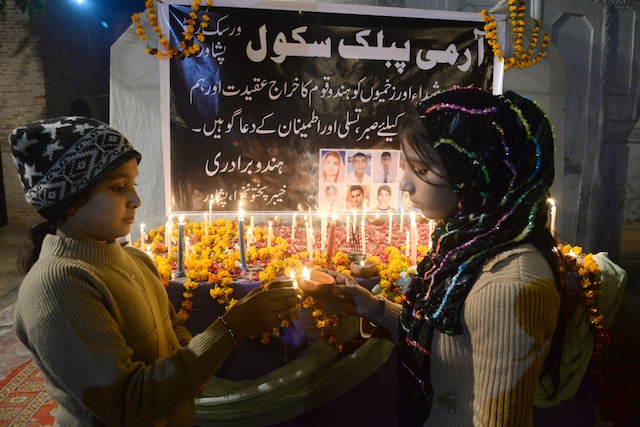 Girls light candles in memory of those who lost their lives in late 2014, when armed gunmen invaded and opened fire on hundreds of students and teachers in northern Pakistan. Credit: Ashfaq Yusufzai/IPS

Khadim Hussain, head of the Peshawar-based Bacha Khan Education Trust, told IPS that the Taliban “thrive on illiteracy”, preying on ignorant sectors of the population to “toe their line”.

For this very reason, he stressed, education in Pakistan is more important now than ever before, as the most sustainable weapon with which to fight militancy.

In October 2014, the Pakistan office for the United Nations Children’s Fund (UNICEF) announced that school supplies worth 14.4 million dollars, donated by the Saudi Fund for Development (SFD), had been handed over to KP’s education department.

The funds were aimed at improving facilities in over 1,000 schools across KP and FATA, serving 128,000 students.

It was a promising moment – shadowed barely two months later by the daylong siege and massacre at the Army Public School in Peshawar.

With the bloodshed still fresh in everyone’s minds, Hussain’s suggestions are easier said than done.

Fourteen-year-old Jihad Ahmed, who survived the attack, is still afraid to go back to school. A sixth grader named Raees Shah, who saw his best friends die in front of him, has similarly had a hard time concentrating on his studies.

While some want desperately to forgot and move on, others – like ninth-grader Amir Mian – keep the memories of that day burning bright. When the attack began, Mian’s older brother had managed to escape the school premises unscathed, but came back to fetch the younger boy. When he did, he took a bullet and died shortly after.

“We will never forgive his killer,” the teenager told IPS. “We hope that God Almighty will punish his killers on the Day of Judgment.” 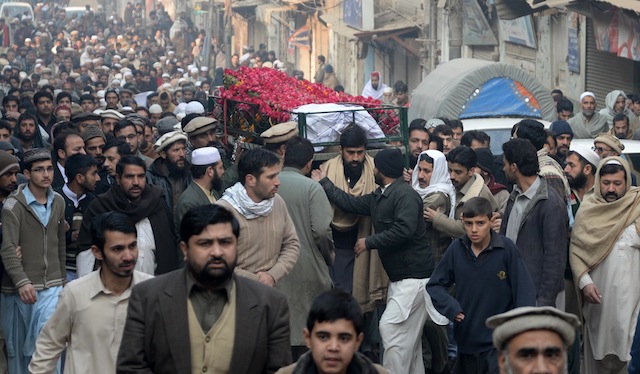 In a bid to restore the public’s confidence in the education system, Pakistan Prime Minister Nawaz Sharif in February signed onto the 15-point plan for a Pakistan Safe Schools Initiative launched by A World At School, a global campaign working to get all school-aged kids into a classroom.

The 15 ‘best practices’ outlined in the agreement include community-based interventions such as involving religious leaders in the promotion of education as a deterrent to terrorist attacks, and improving infrastructure and safety mechanisms like constructing and reinforcing boundary walls.

Currently, only 61 percent of government schools and 27 percent of primary schools in rural areas have boundary walls, while scores of others lack protective razor wire atop their fortifications.

The programme’s donors and supporters hope it serves as a first step towards healing, and, ideally, to a more educated and resilient Pakistan.