"Got The Date Right This Time" Tweets PM Modi In Birthday Greeting To Ashraf Ghani, Ahead Of Afghan Visit

NEW DELHI: Indian Prime Minister Narendra Modi tweeted birthday wishes to Afghan President Ashraf Ghani, adding that this time, he had gotten the date right. The Prime Minister was referring to his previous tweet -- on February 12 -- in which he had wished the Afghan leader, only for President Ghani to tweet back clarifying that his birthday was still months away. The incident had received a lot of attention on social media, with the Twitterati unable to resist from the cliched ‘rebirth’ jokes. 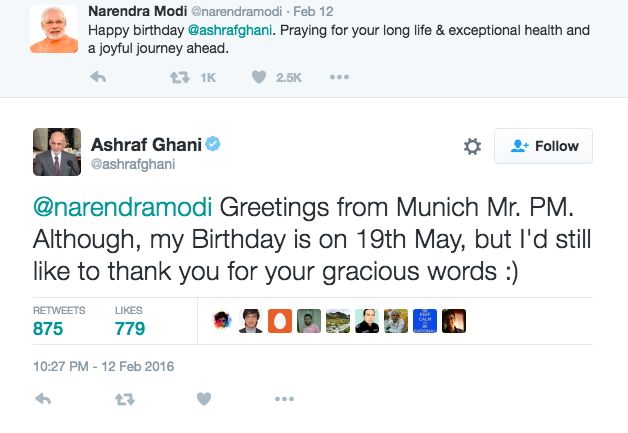 The slip up was understandable given that Google, at the time, listed Ghani’s date of birth as February 12, 1949. That, however, did not stop the jokes. 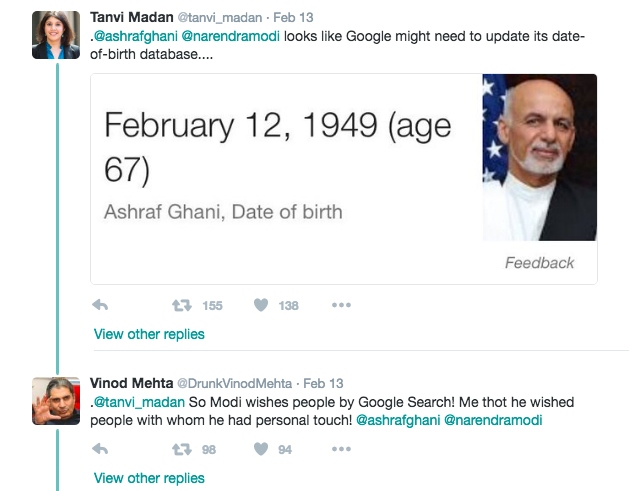 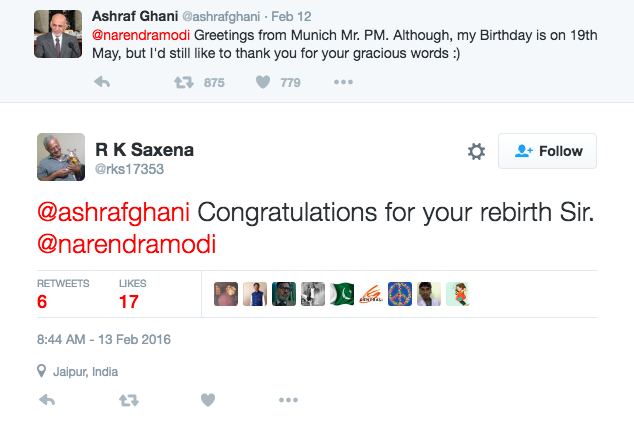 More significant that the correct birthday wish, however, is news that PM Modi is all set to visit Kabul in June this year. Reports suggest that the Indian Prime Minister will be making the trip to formally inaugurate the Salma Dam, with this visit being his second visit to Afghanistan in under a year.

The visit -- albeit unconfirmed -- has made media headlines, indicating the importance of Afghanistan in India’s foreign policy. This importance is corroborated by India’s soft power presence, as India’s development assistance programme for Afghanistan stands at $2 billion, making the country one of the leading donor nations in Afghanistan.

India’s soft power presence is in the form of investments in hospitals and institutional buildings (India built Afghanistan’s parliament), accords to train army and police officers, and other capacity building measures. It’s interest in the region is linked to Afghanistan emerging as an economic and energy link to Central Asia.

As such, PM Modi is expected to discuss the trilateral agreement on the Chahbahar port in Iran with Iran and Afghanistan, following his trip to Kabul in June.

There has been concern in India in recent years on the lack of space accorded to it as far as Afghanistan is concern, despite the country making clear that it has strategic interests in the country. Last year, India was left out as the US and China co-convened a high level meeting on Afghanistan’s peaceful development and regional cooperation.Months of efforts by both Pakistan and the U.S. to ease out differences and bring China on board finally bore fruit, with the first-of-its-kind meet being held on the sidelines of the United Nations General Assembly. In the chair were the Chief Executive of Afghanistan Abdullah Abdullah, U.S. Secretary of State John Kerry, Chinese Foreign Minister Wang Yi, and Afghan Foreign Minister Salahuddin Rabbani. Those who participated in the talks were ministers from Turkey, Saudi Arabia, Iran,Australia, Italy, Norway.Kazakhstan. Pakistan was represented by National Security Advisor Sartaj Aziz. There was no sign of India, clearly not even invited as a participant.

In the ensuing dialogue that has involved Pakistan, Afghanistan, the United States and China, there has been no role for India. China has thus stepped in where India seems to have been afraid to tread. In that it has expanded its role from economic and financial assistance to a clearly strategic partnership, sitting on the same side of the table as the US on this issue. In the process that India, which seems to be happy with the “fondness” that the common Afghan reportedly has for Indians, seemed to be completely out of the picture as even two major competitors join hands to tackle the challenges posed by Afghanistan, and the fast deteriorating situation there.

China’s interest in Afghanistan shifted from the financial to the strategic about three years ago according to experts here. In fact the Wall Street Journal taking first note of the shift wrote: During Afghanistan’s tumultuous political transition last year, Chinese security officials began visiting Kabul regularly, and expressed concerns about militant havens, according to a former senior Afghan security official.

Franz-Michael Mellbin, the European Union envoy to Afghanistan, said he first noticed increased Chinese interest in Afghanistan in 2013. “They have been looking for an area to expand their foreign policy toolbox,” he said, “but also doing it in a way that would not be seen strategically threatening to the U.S.” During an October conference on Afghanistan in Beijing, a Chinese general surprised some U.S. participants by suggesting the Pentagon inquire about a joint effort with China to train Afghan security forces, say people familiar with the matter.

This was followed by a secret meeting of the Taliban in China in May this year, with the news being leaked at the time to the Wall Street Journal in the US. Top officials from Afghanistan and Pakistan were present at the meeting, that really became the turn point for full blown Chinese participation in the Afghan peace process. The US has been in close contact with Beijing with Secretary of State John Kerry speaking highly of the new found cooperation with China at the New York meeting.

He went on to describe China “as a country that understands very deeply the cross currents in Afghanistan. Relations between China and Pakistan are close and strategic, leading to discomfort in New Delhi and also Washington, that the latter has clearly overcome. The Wall Street Journal quoted Hu Shisheng, an Afghanistan expert at the China Institutes of Contemporary International Relations, a think tank linked to the Ministry of State Security saying that the training of Afghan forces outside Afghanistan by both US and China was seen as “feasible and realistic.” The two countries are jointly training diplomats as well.

Pakistan is supportive, with a foreign ministry statement from Islamabad maintaining earlier that the Sharif government will work closely with China to support the Afghan peace process. US media reports also suggest a lowering of tensions with senior officials being quoted as saying that they do not see China as a competitor to its relations with Afghanistan and Pakistan.

Given the above, India -- now more than ever -- feels the need to establish ties with Afghanistan, and PM Modi’s visit to Kabul is located in this strategic context. The Salma Dam project is an offering in this larger context, the Indian cabinet having approved its construction at a revise cost just ahead of PM Modi’s first visit.