Transgender in Pakistan: A "Forgotten People"

ISLAMABAD (IPS): At an open market in the district of Mehmoodabad in Karachi, Miss Bindiya Rana, 35, starts another day at work selling clothes. Living in one of the poorer parts of the city, like many others here she faces a daily struggle to make ends meet. Yet, of strong build with dyed hair and wearing heavy make-up, she and others like her face a bigger challenge than most.

Part of the transgender or hijra community, social stigma and discrimination make them outcasts in Pakistan’s highly conservative society. While there are no official precise figures on the number of transgender or third-gender people living in the country, estimates range from 80,000 to 350,000-500,000, with perhaps 60-70,000 in Karachi alone.

From a lower middle-class family, Rana first became aware of her identity as a child. In public she dressed like a boy, but alone in her room she would wear girl’s clothes, lipstick and practise dancing. After running away from home for two months, her parents gradually came to accept her identity. Most are not so lucky. Shunned by their families, many have no option but to join close-knit hijra communities led by older gurus who take on the role of ersatz guardians, offering them protection.

With few completing formal education, employment opportunities are limited. Many have to endure ridicule by dancing openly in the streets or at weddings to scrape by a living, or resort simply to begging. Others are involved in sex work with little education about safe sex and the dangers of HIV.

Vulnerable to physical and verbal abuse, they also have to bear the humiliating attitude of police officers, doctors at hospitals, and public officials, complains Rana. Reports of beatings and other forms of violence directed against them are commonplace.

On May 25, a transgender individual by the name of Alisha died in a hospital in Peshawar in Khyber Pakhtunkhwa after succumbing to gunshot wounds, with some blaming delayed medical care for her death after other patients allegedly complained and doctors debated whether she belonged in the male or female ward. Located in the northwest of Pakistan, it is the fifth reported case of violence in the province against transgenders this year.

In a scathing editorial, the Daily Times wrote that, “In the light of apathetic attitude and its justification by hospital authorities, it would not be farfetched to conclude that an abhorrent form of apartheid mentality prevails in Pakistan in which transgenders elicit such contempt that their lives are not given even an iota of value.” 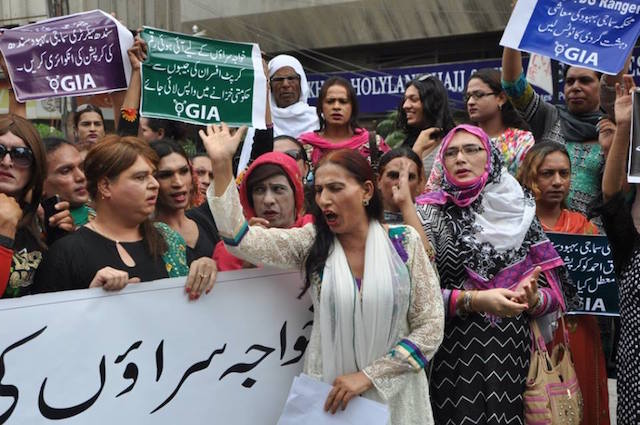 Pakistan’s hijras have faced a long battle to be accepted as full citizens with equal rights according to the country’s constitution. In 2012, a landmark decision by the Supreme Court decreed that they be issued with computerized national identity cards, thus for the first time officially listing their existence as a legal third gender.

“We were in seventh heaven,” said Rana of the decision conferring many of the same rights, such as voting, property, and inheritance, as other citizens.

However, the National Database and Registration Authority, charged with issuing the cards under the Ministry of Interior, initially dragged its feet, requesting that they undergo humiliating medical examinations first.

“We came out onto the streets protesting and managed to overturn the decision,” said Rana.

Nevertheless, more than four years on, many still do not have cards. One of the main obstacles is that cards can only be issued to those with biological parents or those officially adopted with proper documentation. For those who have been ostracized by or run away from their families (or simply did not know them as they joined hijra communities when very young), this proves an impossibility. Furthermore, the gurus are not considered to be parents by the registration authorities.

But to tackle the issue, no interim arrangement has been devised by the establishment. The continued non-provision of cards means that many continue to be deprived of full civil rights as well as enrolment in the Benazir Income Support Program (social security program) and free National Health Program.

Other attempts to improve the status of hijras through affirmative employment policies and increasing opportunities have also proven insufficient, poorly paid, or even derogatory. The regional revenue office in Karachi resorted to employing hijras for debt collection by instructing them to dance outside debtors’ doors and so shame them into paying up. “It was very humiliating for us,” explains Rana.

Despite the progress made, Rana remains frustrated at the lack of support and hostile attitudes. One of five transgender candidates in Pakistan’s general elections in May 2013 (the first time in the country’s history that hijras could run), she ran and lost as an independent candidate to Sindh Provincial Assembly.

“Instead of supporting me, people mocked me in every way possible,” she says.

Determined to improve the plight of Karachi’s hirja, she established her own NGO in 2009 called Gender Interactive Alliance Pakistan, which seeks to provide shelter, employment, basic skills training, and even a telephone helpline. “We are the forgotten people,” she says, but “I will fight for our equal rights until the end.”