BANGKOK: Myanmar’s first democratic government since 1962, under Daw Aung San Suu Kyi, has advised the United States through its Ambassador against using the term ‘Rohingya’ to describe the Muslims who have lived in that country for generations now.

A report in the Washington Post confirmed Aung San Suu Kyi’s hardline position quoting U Kyaw Zay Ya, a Foreign Ministry official of Myanmar as saying, that she would follow the earlier military government and not refer to the Rohingya with this word as it does not recognise them as citizens. He said, “We won’t use the term Rohingya because Rohingya are not recognized as among the 135 official ethnic groups,” said Mr. Kyaw Zay Ya, who was at the meeting. “Our position is that using the controversial term does not support the national reconciliation process and solving problems.”

The United States had not paid heed to this request with President Barack Obama referring to the persecuted Muslim community by the name with which they describe themselves. The new democratic government has clamped down further on this, by calling in the US Ambassador to Myanmar and stressing the need for Washington to give up this reference altogether.

IRIN news examined the current status of the Rohingya in Myanmar, and the details of this controversy in the report reproduced below:

Already widely reduced to statelessness and in many cases forced into camps for displaced people, an 800,000-strong population of Muslims in western Myanmar now faces increasing efforts to eradicate the very word they use to identify themselves as a group. Under pressure from Myanmar’s nominally-civilian government, the international community sometimes appears complicit in the airbrushing of “Rohingya” from official discourse.

In this briefing, IRIN breaks down some of the questions about a group of people that has been called one of the most persecuted minorities in the world.

Who are the Rohingya?

Approximately 800,000 Rohingyas live in Myanmar. Tens of thousands have fled in recent decades to Malaysia, up to half a million to neighbouring Bangladesh, and an unknown number are scattered from Thailand, to India, to Saudi Arabia.

A 1799 study lists an identity called “Rooinga” in what is now Myanmar’s Rakhine State. However, a historian in March 2014 argued that “this term has only become popular since the late 1990s”.

Some Muslims were brought to Myanmar territory under British rule in the 19th and 20th centuries, fuelling a popular claim that more continue to pour over the border from Bangladesh, which has been refuted by economists.

Why are they so marginalized?

For years, Rohingyas have had their rights - from movement to reproduction to citizenship - restricted by what a Bangkok-based human rights organization called deliberate state-designed "policies of persecution".

In July and October 2012, violence erupted between ethnic Rakhine Buddhists and Rohingyas. The outbursts and ensuing round-ups by security forces resulted in 140,000 people, mostly Rohingyas, being held in government-built camps.

What does the Burmese government say?

When Myanmar’s reform-minded president, Thein Sein, addressed the UN General Assembly in 2012, he referenced the Rakhine violence without naming parties to the conflict.

U Shwe Maung, a Rohingya member of parliament, told IRIN: “When I talk about the Rohingyas with government officials, they just go silent. They know their silence is extremely powerful.”

The politician argues that the term appeared in a government-published geographytextbook as recently as 2008.

However, in response to a September 2014 announcement that Bangladesh would repatriate some of the verified Myanmar citizens it hosts, the Burmese government rejected the name of the group itself, saying: “We have never had ethnic nationals called ‘Rohingya’”.

Myanmar had not conducted a census in 30 years, and partnered with the UN Population Fund (UNFPA) for its 2014 survey.

Despite warnings from local leaders, the Transnational Institute (TNI), theInternational Crisis Group (ICG) and Human Rights Watch (HRW), the questionnaire included a particularly contentious item: a question about ethnicity for which a 1982 list of 135 ethnic groups, which does not include “Rohingya,” would be used.

The government initially promised they would allow Rohingyas to self identify on an open-ended “other” option. But two days before the start of enumeration in March 2014, international aid workers fled western Myanmar after being targeted by Buddhist mobs who attacked their offices over perceived humanitarian bias towards Rohingyas. The government reneged on its promise to record “Rohingya” on security grounds.

Anyone who asked to be recorded as “Rohingya” went uncounted; some were allowed to be listed as “Bengali”. “Both options entailed denial of the ethnic group's existence,” prominent international lawyer Geoffrey Nice and analyst Francis Wade wrote in a May 2014 article, which warned that the Rohingya were likely to fall victim to more organized violence.

“The census team asked me ‘what is your ethnicity?’ When I answered ‘Rohingya’, they walked away. They didn’t even ask me any of the other questions,” Nor Mohammed, 60, who lives in the Dar Paign camp in Rakhine State, told IRIN. “Now if we don’t appear in the census, are we really here?” 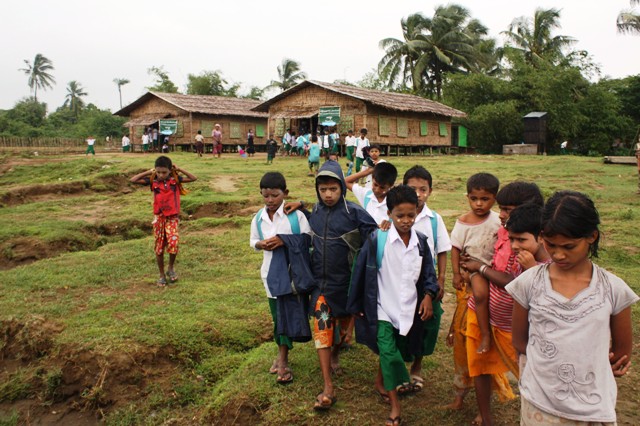 Photo: David Swanson/IRIN Even humanitarians providing aid, such as this UNICEF-funded school, are shying away from the "R-word"

UNFPA’s country representative Janet Jackson explained: “In Rakhine State before enumeration, opposition to any use of the term Rohingya proved far more serious than anticipated” and that “UNFPA voiced regret that people could not self-identify and were consequently not included in the census.” In a statement the agency said the move “could heighten tensions in Rakhine State.”

In the wake of the census, David Matheison, HRW’s senior Burma researcher lamented “the failure of the government, the UN and international donors to take action to effectively address the ethnic and religious divides that help fuel instability, violence and disenfranchisement”.

An international observer report called the census process in Rohingya areas “a complete failure”, explaining that Rohingyas “very much wanted to participate in the census but were prevented from doing so by the census field staff and the Department of Population officials.”

Why does exclusion from the census matter?

Srdjan Mrkic, chief of demographic statistics at the UN Statistics Division, explained that while an ethnicity question (along with religion and language) is not mandatoryon a census, about 85 percent of countries do include it.

However, he explained, if ethnicity is included, there are guidelines for asking the question: “Ethnicity should be a completely blank line. Even if you list five options for ethnicity and have a line marked 'other', you are in a certain way appearing to limit the choice of responses. The enumerator must not guide responses in any way.”

In September the government released provisional results from the census, but said ethnicity data would not be published until 2015 on the grounds that such data could enflame intercommunal tensions.

Nonetheless, census information, with a zero count for Rohingya and an unknown number of people registered as “Bengali”, appears to be informing citizenship verification programmes, designed to determine who is eligible for documents based on how long their families have lived in Myanmar.

However, for those who qualify, documents will come without the label “Rohingya,” and probably with “Bengali” instead. According to HRW, “the stipulations of the Burma Citizenship Law governing the right to one of the three types of Burmese citizenship effectively deny to the Rohingya the possibility of acquiring a nationality.”

The government is running verification programmes in several locations, including Rakhine’s Myebon Township, which was razed in the 2012 violence, and where a high percentage of people reportedly accepted “Bengali” as their ethnicity on the 2014 census.

Some cling intensely to the identity term.

“I am Rohingya, I am not Bengali,” said Muhammad Uslan, 58. “I’m holding onto the name no matter what. In 2012 the Rakhines attacked us for our ethnicity, and today if they want to try to kill me again, they can - I’m not changing it.”

Others are open to the idea of shedding the Rohingya label in exchange for more rights.

“If we get equal rights with other ethnic groups by calling ourselves Bengalis, then we should accept that name,” said Hamid Huq, a 36-year-old living in a camp outside Sittwe.

However, even in his assertions, Huq retains distrust of the government and acknowledges pressure to change identity terms has been increasing.

“At every meeting we have with government officials, they always tell us we are going to have to register as Bengalis. But the government must declare it genuinely equal citizenship. I don’t trust this government so they must say this specifically or I won’t believe them,” he said.

“Even when foreign missions come to meet with us, Western government officials take us to the side and tell us that we should accept Bengali so we can leave the camps.”

What do international actors say?

In June 2014 after local media reported that the government had asked the UN Children’s Fund (UNICEF) to apologize for using “Rohingya” in a presentation, UNICEFcalled the incident “an oversight”, asserting that the agency “had no intention of engaging in a discussion on [the] sensitive issue of ethnicity at that forum”.

UN Secretary-General Ban Ki-moon continues to use the term in his speeches about Myanmar.

In July, the UN special rapporteur on human rights in Myanmar explained at the conclusion of her mission to the country: “I was repeatedly told not to use the term ‘Rohingya’ as this was not recognized by the government.”

A joint OCHA/UNDP mission to Rakhine ending on 11 September mentioned “ethnic Rakhine” and “Muslim” communities, but not “Rohingya”. An ICRC statement one day earlier used the same terms.

(This is a detailed report on the current controversy around Rohingya Muslims in Myanmar courtesy IRIN news available at irinnews.org)