DHAKA (IPS): Like the living room of any proud family, the one in Ajoy Roy’s house boasts photos of the eldest son, Avijit.

A large framed portrait which has a powerful presence in the room hangs on the mint-coloured wall as Ajoy, a retired physics professor who at the age of 80 is frail but still very mentally alert, sits in a chair below it, sipping tea.

It is the image of a popular Bangladeshi writer and bio-engineer, tragically murdered for his beliefs along with scores of other atheist writers, bloggers, publishers, gay activists and religious figures by suspected Islamist militants in the predominantly Muslim country over the past few years.

“Avijit wasn’t an activist on the streets, but he used his pen to protest against social injustice, religious fanaticism and propagate the idea of secularism, the main theme of his writing,” Ajoy, wearing a traditional lungi around his waist, told IPS. “It’s a terrible loss. It cannot be compensated for.” 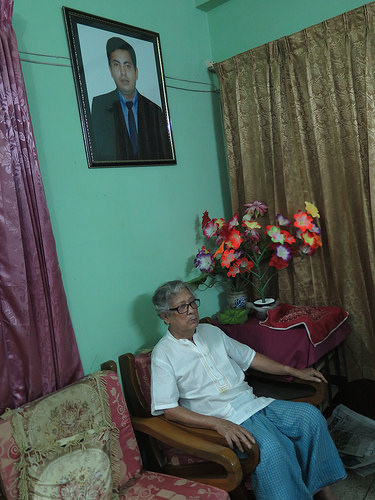 (Ajoy Roy, the father of Bangladeshi writer Avijit Roy, who was murdered in 2015. Credit: Amy Fallon/IPS)

More than 50 writers, activists and others have been killed in Bangladesh since 2013, according to Human Rights Watch (HRW).

Avijit, 42, a U.S. citizen who lived in America with his wife Rafida Ahmed, was hacked to death after the pair went to the Bangladeshi capital Dhaka for a book festival in February 2015.

There have been many more killings since then.

This July, 23 people, including 17 foreigners, were killed at a bakery in the diplomatic zone of Dhaka, in one of the worst terror attacks ever in Bangladesh.

Five of the involved suspects were killed in a police operation at the eatery, while one survivor was arrested and remanded, and another jailed, the Dhaka Tribune later reported.

The suspected ringleader of the attacks and his two affiliates died in a police raid in August, but the search is still on for a coordinator, the arms suppliers and funders of the attacks.

After the murders of two other activists, LGBT campaigners Xulhaz Mannan and Mahbub Rabbi Tonoy, in April, the government, under international pressure over the spate of killings, arrested about 14,000 people.

Meenakshi Ganguly, South Asia director at HRW, said despite no further attacks since the brutal bakery murders, there were “concerns” that the crackdown was leading to “an arbitrary rounding up of usual suspects”.

The drop in incidents meanwhile “suggest that the state could have acted effectively earlier” to prevent the killings, she said.

There was still a “climate of fear” in Bangladesh among writers and members of minority groups, said Ganguly.

“Some have been able to leave the country, but many more, still in Bangladesh, fear that the government will not do enough to protect them,” she said.

Maruf Rosul, 29, a secular writer, photographer, filmmaker and activist who pens for various outlets, including freethinking site Mukto-Mona, set up by Avijit and now being run by his successors, said Islamic extremists in the country had been silenced.

“But the government has not taken the proper action to uproot these evil forces,” Rosul, who said he was on an extremist group’s hit list, but as a “frontier activist” couldn’t go into hiding, told IPS. “I am worried about the future.”

His anxiety was growing ahead of the Durga Puja, the biggest religious festival for south Asia’s Hindu community, which will begin next week, on Oct. 7.

Rosul said “every year” during the festival there were attacks by Islamic extremist groups in Bangladesh, yet officials did nothing but issue “sympathetic statements”.

“As there is no strong law enforcement, we are worried about our Hindu friends,” he told IPS. A Hindu tailor, hacked to death in April, is among those who have been killed in the country.

edition of Dhaka Literary Festival (DLF) is also due to take place in mid-November. Director Ahsan Akbar told IPS that preparations were in “full-swing”.

“We have had only a couple of cancellations so far, citing security fears, but the encouraging news is our speakers are really looking forward to the event and we expect no more cancellations,” he said.

Given the recent wave of murders though, Akbar said “writers in the country today are unfortunately self-censoring and thinking twice about what they write and publish”.

“Bangladeshi writers outside of the country are deeply sympathetic and doing many things to raise the awareness amongst the international community, such as engaging with PEN International,” he said.

Olof Blomqvist of Amnesty International told IPS that “the investigations into the targeted killings are ongoing, and there have been arrests made in some of the cases. Genuine justice will of course take time, but it is worrying that the perpetrators have so far only been held to account in one case, the killing of Rajib Haider in 2013.

“The authorities must ensure that those responsible are held to account, but also do more to protect those people at risk,” he said, adding that, “We still get desperate pleas on a weekly basis from people who have received threats and are afraid for their lives if they stay in Bangladesh.”

“Police must create a climate where activists who have been threatened feel safe to approach police and not fear further harassment,” Blomqvist said.

Ganguly also said in order to prevent more attacks, the Bangladeshi authorities needed to deliver a message that they believe in “peaceful free expression”.

“They should not recommend to those at risk that they self-censor to avoid hurting religious sentiment and becoming targets for retribution,” she said.

In 2015, after the killing of writer Niladri Chatterjee Niloy, Bangladesh’s police chief warned bloggers that “hurting religious sentiments is a crime”.

Police killed one of the key suspects involved in Avijit’s murder in June, but two others escaped, they said, and are still at large.

Following his son’s death, Ajoy, who said Avijit had been targeted by extremists in the few weeks before his death, and that he had warned him not to return to Bangladesh, could be forgiven for going into hiding.

But he said he was continuing “my activism” against fundamentalist groups, and had been invited to speak at various institutions.

“I’m not scared,” said Ajoy. “I have lost my son, after that I have nothing to care about.”

Ajoy said he wanted Avijit to be remembered as a “courageous young man who would face any hard situation for democracy, for secularism, for free-thinking”.

It was his wish that “the younger generation follow in his footsteps”.

“I would not discourage these courageous young people to quit blogging, speaking your mind, because Bangladesh is constitutionally a secular, democratic country so we must uphold the constitution,” said Ajoy.

“We have to make the common people understand that this is not an anti-Muslim country, it is liberal,” he said. “Although a large number of Muslims are here, they’re also liberal.”

IPS made several attempts to contact the Bangladeshi police and government for comment, but they did not respond.

(Maruf Rosul, a Bangladeshi writer and activist who has received death threats from Islamic militants for his blog posts. Credit: Amy Fallon/IPS)