NEW DELHI: Tensions between India and Pakistan spiralled on Wednesday, after a group of armed militants attacked an Indian army unit in Jammu and Kashmir, killing seven soldiers. The attack comes just a few days ahead of the the Heart of Asia Conference, for which Pakistan’s foreign affairs adviser Sartaj Aziz will travel to Amritsar on Sunday.

The militants, dressed as police officers, barged into the officer's’ dining hall at Nagrota, killing four soldiers there. The militants then moved onto two other buildings, where they held a group of 16 soldiers and relatives, including “two ladies and two children” hostage. 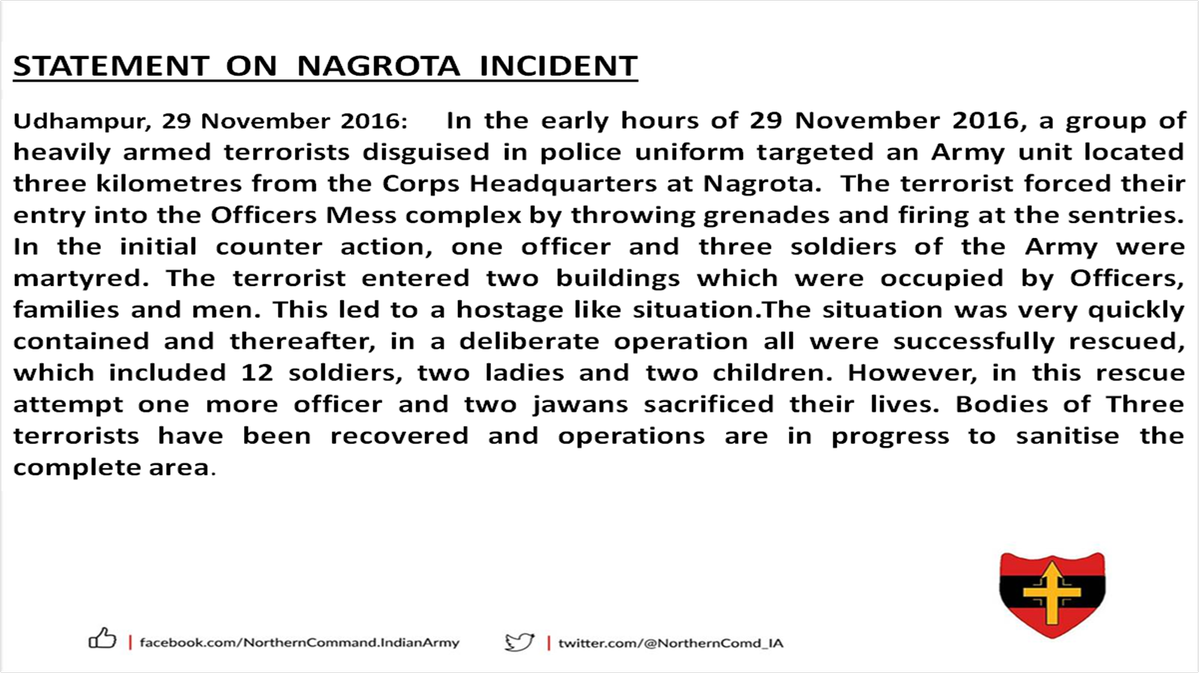 The incident has further strained relations between India and Pakistan, which were dealt a severe blow after a a September 18 assault by militants on an Indian Army post in Uri killed 18 soldiers. India responded with a “surgical strike” across the Line of Control, targeting Pakistani terror camps along the border. Since the Uri attack and subsequent “surgical strikes” India has lost 30 soldiers (official tally till Tuesday, before the Nagrota attack, puts the number at 23) and Pakistan, although it has not released an official count, has also seen a number of casualties. Dozens of civilians have been killed, with life for villagers near the border entirely disrupted.

The tensions are accompanied by increasingly acerbic rhetoric from both countries. Following the Nagrota attack, the Bharatiya Janata Party (BJP)’s Ravinder Raina said that Pakistan will have to pay the price. “This was a nefarious design of Pakistan; this was a game plan of Pakistan to attack the cantonment area of the Indian Army in Nagrota. It was a game plan like what happened in Uri and Pathankot, but the alert jawans of army gave a befitting reply to the terrorists and foiled their bigger game plan” he said, adding that “ “I think Pakistan won’t understand the language of diplomacy Pakistan only understands the language of bullets, and what the Government of India, what the army has given them; is a befitting reply in the border area. Our forces are all set; we will not forgive Pakistan, Pakistan has to pay heavily for the Nagrota terrorism.”

Meanwhile, in Pakistan, outgoing Army Chief General Raheel Sharif issued a warning of sorts to India, saying it would be dangerous to mistake his country’s “restraint” over recent tensions in Kashmir for weakness. Gen. Sharif made the statement while handing over power to incoming chief General Qamar Javed Bajwa during a ceremony at the army headquarters in Rawalpindi. “I want to make it clear to India that considering our policy of restraint a weakness would be dangerous for her,” Sharif said.

Pakistan’s Foreign Office, however, is still speaking in a different language, with Aziz indicating that his trip can be extended if India is set to resume dialogue. Pakistan’s High Commissioner to India Abdul Basit, similarly, said Islamabad was ready for unconditional talks with India.

Sources say that it’s unlikely that India will agree to resume dialogue, especially now after the Nagrota attack. They add that the latest attack is being viewed as yet another indication of Islamabad’s duplicity, where the push for dialogue is accompanied by attacks that serve to severe relations.