This Islamic State propaganda image, circulated via social media, plays on the popular Call of Duty

NEW DELHI: The world is far too familiar with the brutality of the Islamic State (IS). Images and videos of beheadings; the executions of US journalists James Foley and Steven Sotloff, and British aid workers David Haines and Alan Henning; declarations justifying the kidnapping of women as sex slaves -- to name a few examples.

These examples of the IS’ interaction with the external world have a clear purpose -- to deter groups opposing the militants as they continue their advance in Iraq and Syria (for example, the Iraqi army fled as the group advanced into Mosul), to make a statement to international governments that are allied against the group, and to respond to criticism that the group’s actions are a perversion of Islam, for instance.

The group manages an elaborate social media stream, used to build a public image in line with the objectives mentioned above. An article in Al Monitor explains that, “Each online network such as Twitter, Facebook and YouTube have designated moderators, and each “wilayah” (state) has its own dedicated social media accounts, with Ninevah state, for instance, only posting news from that area. In addition to the official IS social media accounts, there are hundreds of private accounts of individuals who are followed by thousands of Internet users.”

For instance, when two Austrian girls who ran away to Syria to join IS started posting images of themselves brandishing Kalashnikov rifles and wearing the full niqab on their social media accounts, it was clear that they had become part of the IS’ propaganda machinery.

In another example in August this year, a Tweet was posted by a pro-IS Twitter handle @sunna_rev (the account has since been removed) that showed the IS flag on a smartphone in front of the White House. It was accompanied by the hashtag #AMessageFromISISToUS, aiming to show that supporters of the group are everywhere -- even on American soil.

Further, the group has a dedicated media production unit, “Al Furqan” media -- which regularly posts videos and audio clips, some of which, such as the public executions of the US journalists and British aid workers, we have become far too familiar with. Another media organisation associated with IS, “Fursan Al Balagh Media”, works on video transcriptions -- making the group’s productions available to a wider audience.

An example includes a video titled “A Message To The American People” (no longer available on YouTube) that shows coffins covered with the US flag and a message reading, “This is what will happen to you in any place you are, if aircraft bomb the mujahedeen.”

Most Islamic State propaganda videos are, in fact, removed from the internet shortly after being published. To show one example, the video below shows a trailer produced by the Islamic State titled “Flames of War” that is targeted, quite clearly, at the US.

Whilst the examples above serve a part of the Islamic State’s online agenda -- namely, deterring opposition and issuing messages to opposing international governments -- there is a key aspect of the group’s propaganda machinery that is overlooked by international media.

These focus on the IS’ other main aim -- to recruit followers, and as such, represent a very different face of the militant group.

This video for instance does not show the brutal killings that the world has come to associate IS with, but the group’s efforts to establish law in accordance with what they propagate as the teachings of Islam.

Similarly, an article in The Global Post describes a video intended to recruit followers to the IS. It describes a video showing a conversion ceremony of a group of Yazidis by IS militants, who dressed in dishdashas welcome the Yazidi men as “brothers.” In the same video, an IS militant being interviewed is asked, in Arabic, “Various politicized media outlets published false reports that you had killed the Yazidis, and forced them to convert to Islam, and violated the honor of their women. How do you respond to these reports?”

“This is the opposite of what really happened… The Islamic State does its utmost for the repentance of any infidel — whether Yazidi, Crusader [Christian], or Jewish. We have been fighting for no other reason than to extract people from their ‘kufr’ [‘unbelief’] and to usher them into the fold of Islam,” the militant explains.

Another video shows a militant referring to IS as “paradise.” In yet another, women speak of the joy of being widowed through martyrdom.

The latest issue of the group’s fairly snazzy English-language digital magazine, “Dabiq” outlines services that are provided by the group for the betterment of the community. 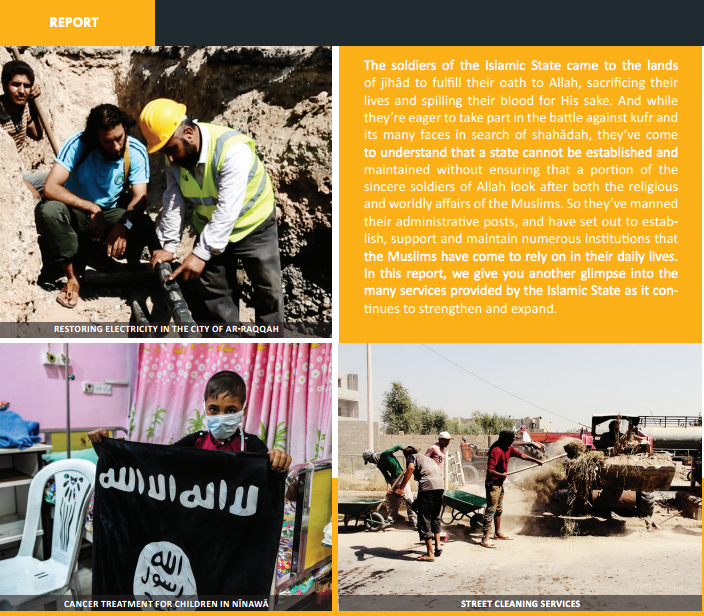 The fact that the IS project themselves in a more humane light has been corroborated by many. Christians who fled Mosul spoke of the fact that for a month after the militants moved in, minority groups were treated kindly and urged to tell others who had fled to return. Things changed, however, with the militants soon after issuing an ultimatum to Christians in the area to either convert to Islam or pay a protection tax, or be killed.

The Global Post reports a similar story from Sinjar, home to the minority Yazidi community. When IS entered the Yazidi villages of Sinjar on Aug. 3, survivors reported they were told that if they stayed in their homes and raised a white flag, they would be safe. “The man who told us this was our neighbor,” said a survivor who asked to remain anonymous because IS is still holding his two wives and 25 children. “He is Arab but we have known him for years. We trusted him. He told us IS were taking over the town but as long as we didn’t fight we would be welcome to stay,” The Global Post quoted the man saying. The UN has recently confirmed that more than 5000 Yazidi men, many of whom probably believed the false promises of safety, were executed by the Islamic State.

Whilst the international media and community is responding strongly to the Islamic State’s brutal videos, it has yet to muster a response to counter the group’s projected humane face. Choosing to trust this seemingly humane side to the IS may seem ludicrous to most readers who are well aware of the other side of the coin that involves the brutal killings, kidnappings and perversion of Islam. However, given the specific context of Iraq and Syria -- rattled by years of violence and discrimination -- it may seem believable to the very people it is targeted at.