Israel Cracks Down On Palestinian Prisoners on Hunger Strike: Barghouti in Solitary

ELECTRONIC INTIFADA: Hundreds of Palestinian prisoners entered day six of their hunger strike on Saturday, while Israeli authorities ratcheted up their punitive measures in an attempt to weaken the collective action.

On April 17 , 1,500 Palestinians launched a mass hunger strike with a long list of demands, including improved medical care and conditions and more family visits.

While several men on strike have already been hospitalized, Israeli leaders are refusing to negotiate with the prisoners’ demands.

“When it comes to the hunger strike by terrorists in Israeli jails, I take the approach of Margaret Thatcher,” Israeli defense minister Avigdor Lieberman wrote on Facebook, in reference to the former British prime minister who notoriously allowed Irish hunger strikers to die in prison in 1981.

Israel currently holds more than 6,000 Palestinian political prisoners. Hundreds are detained without any charge or trial, and thousands after trials in Israel’s military courts which have a nearly 100 percent conviction rate.

Among those placed in solitary confinement are Marwan Barghouti, who initiated the mass hunger strike, and Karim Younes, the Palestinian who has reportedly served the longest uninterrupted sentence in an Israeli prison.

Barghouti, a prominent figure in Palestinian Authority leader Mahmoud Abbas’ Fatah movement, may be further punished for his op-ed published in The New York Times on 16 April explaining the reasons for the strike.

The Palestinian Committee for Prisoners’ Affairs cited claims by Israel that Barghouti’s wife “smuggled” the article out of prison.

But Israeli public security minister Gilad Erdan said authorities are investigating whether it was his lawyers.

Erdan added that if it is discovered that his lawyers did help Barghouti publish the article, they may be banned from visiting him.

Michael Oren, Israel’s former US ambassador who now works for Prime Minister Benjamin Netanyahu, suggested the The New York Times may have played a role.

“If someone in the paper helped him [smuggle the article out of prison], The New York Times should be held accountable,” Oren said, suggesting that the paper’s Jerusalem bureau could be closed.

Ma’an News Agency reported that lawyers have already been banned from visiting Ashkelon prison and access to other prisons has been inconsistent.

The Palestinian Authority’s prisoners’ committee said on Wednesday that Israel’s ministry of justice has confirmed that it would be illegal to prohibit all hunger strikers from seeing their lawyers.

“There is no real justification for this strike,” Erdan said. “Terrorists aren’t in prison to get good conditions. They’re there to be punished. A hunger strike shouldn’t change our behavior as the state toward the prisoners.”

Erdan spearheaded legislation to legalize force-feeding of Palestinian hunger strikers in 2015, when he likenedhunger strikes to suicide bombs.

On Thursday, Israelis fired up a barbecue in the parking lot of Ofer prison, where Palestinians inside had refused food for several days, to “celebrate the hunger strike.” 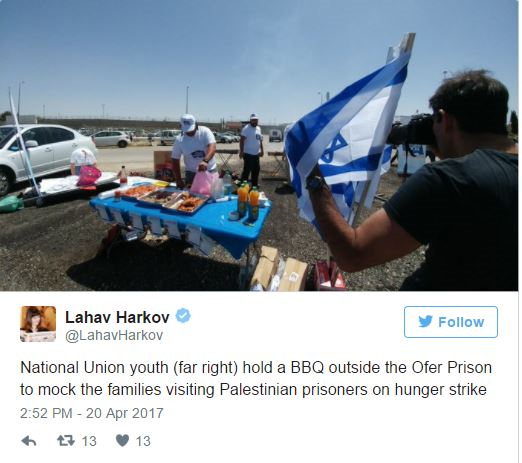 The people behind the barbecue are affiliated with the far-right Jewish Home party, a member of Netanyahu’s coalition government.

Several dozen detainees reportedly resumed eating after five days on strike, but have been replaced by hundreds more joining the protest.

(Cover Photograph:Palestinian boys take part in a rally in support of Palestinian prisoners on hunger strike in Israeli jails, in the West Bank city of Nablus, 20 April. Ayman AmeenAPA images)