A tentative calm prevailed in Gaza most of Tuesday after a violent flare-up the previous day, when a rocket fired from Gaza hit a home in central Israel and precipitated airstrikes on the territory.

The break in violence was short-lived, however, as Israel resumed its bombardment after rockets were fired from Gaza late Tuesday.

An Israel official said earlier in the day there was no official ceasefire with armed groups in Gaza, “and the fighting can be renewed at any minute.”

Reports suggested that Israel had demanded the cancelation of a mass protest marking the one-year anniversary of the Great March of Return demonstrations along Gaza’s eastern boundary, during which Israeli snipers have killed nearly 200 Palestinians.


“New conflict will be devastating”

He said his office was “working intensely with Egypt” to prevent the situation from spiraling further out of control.

“A new conflict will be devastating for the Palestinian people, it will have consequences for Israelis, who live in the vicinity of the Gaza perimeter, and it is likely to have regional repercussions,” he added.

Israel fired 72 missiles in 23 attacks on Gaza on Monday and into Tuesday morning, according to Al Mezan, a human rights group in the territory. Three residential buildings were hit, as well as 13 security sites, public and private property, and open land.

Al Mezan said that two people were injured during the bombing, though Gaza’s health ministry said on Monday that seven were injured.

Video shows Palestinians recovering materials from Omar Bin Abd al-Aziz mosque in northern Gaza after it was badly damaged in an Israeli strike: 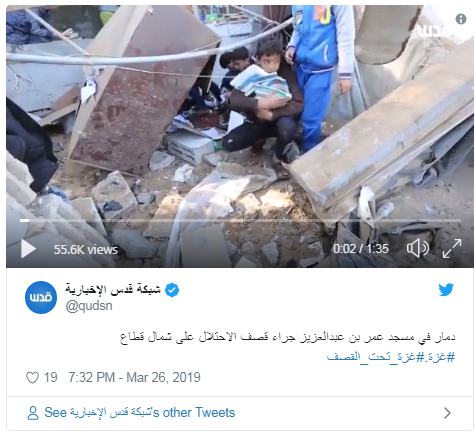 Another video compiles footage of various sites in Gaza destroyed in Monday’s attacks: 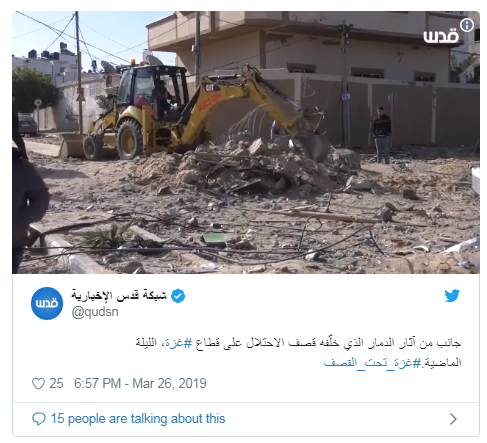 Meanwhile a senior Israeli official stated that US recognition of Israel’s claims to the Golan Heights opens the door to the annexation of other occupied territory.

An unnamed “senior Israeli diplomatic source” who was on the plane during Benjamin Netanyahu’s return from Washington on Monday told Haaretz newspaper that “Everyone says you can’t hold an occupied territory, but this proves you can. If occupied in a defensive war, then it’s ours.”

UN Secretary-General Antonio Guterres said that the executive order signed by Donald Trump on Monday recognizing Israel’s claims to the Golan does not change its status as occupied territory under international law.

The Golan Heights is Syrian territory captured by Israel during the 1967 war along with the Palestinian West Bank and Gaza Strip, and Egypt’s Sinai Peninsula, from which Israel eventually withdrew.

After Israel claimed to annex the Golan Heights in 1981, the UN Security Council declared the move “null and void and without international legal effect.”

Guterres, in his quarterly report on the implementation of Security Council resolution 2334, which condemns Israeli settlement-building in occupied territory, states that “expansion of illegal Israeli settlements in the occupied West Bank, including East Jerusalem, continues unabated.”

In addition to the approval or tender of more than 3,000 housing units in West Bank settlements, Israel has fast-tracked the legalization of settlement outposts built without government sanction.

All Israeli settlements in the West Bank – and the Golan Heights – are illegal under international law.

“I am concerned by reports of increased number of settler attacks and incidents of harassment,” the secretary-general adds in his report.

Teachers and school staff prevented the settlers from breaking in, but classes were dismissed early due to the threat of settler violence, Palestinian media reported.

Video shows Israeli soldiers firing crowd-control weaponry in front of one of the schools: 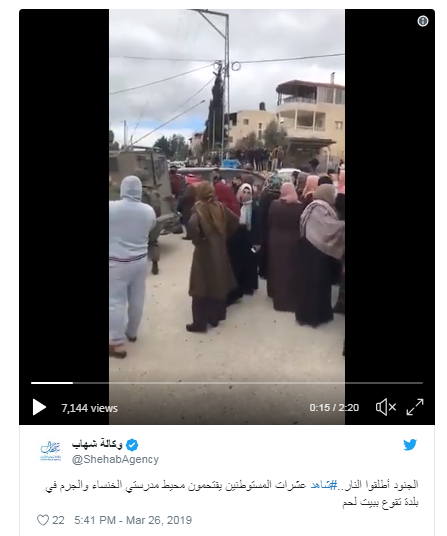 The frequency of occupation-related violence in or near Palestinian schools in the West Bank has increased during the current academic year.

This video shows Israeli soldiers seizing a 9-year-old Palestinian child at his school in the southern West Bank city of Hebron last week:

The heavily armed soldiers accuse the small child of throwing stones. One of the soldiers threatens to arrest a teacher who tries to prevent the detention of the boy.

The child was detained at a checkpoint for an hour, according to the Israeli human rights group B’Tselem.

There are two checkpoints in close proximity to the school, leading to “frequent altercations” between soldiers and students after class lets out, B’Tselem states.

“Throughout 2018, B’Tselem documented several instances in which soldiers burst into the school compound, fired tear gas canisters into the yard, or arrested students and teachers after school hours.”

The infrastructure of Israel’s military occupation, imposed to protect the state’s settlement colony enterprise, is the site of routine and often deadly violence.

“Military fixtures like checkpoints and watchtowers in the West Bank and the heavily surveilled ‘buffer zone’ along the border of Gaza are sites of frequent clashes, representing significant risks of death, injury and arrest to children who live or pass near them frequently,” according to Defense for Children International Palestine.