Evo’s End – Behind the ‘Coup’ in Bolivia

‘Amidst the crisis, the far right got on the move’

SÃO PAULO/ BUENOS AIRES/ NEW DELHI: With fresh elections called in Bolivia amid reports of brutal violence perpetrated on civilian protestors over the past weeks, The Citizen asked two scholars of the region why Evo Morales resigned, or was deposed, and what comes next.

Morales resigned when the military advised him to do so, on Sunday November 8.

As this amounts to a military intervention in political affairs, the situation can be referred to as a coup.

However, we do not face a left against right scenario.

Morales was first elected in 2006 in a context of strong popular mobilisations, which toppled two presidents early in the 21st century.

Despite his strong credentials as a popular leader in a country marked by a social apartheid – he was the first indigenous leader ever elected to the presidency – popular and left support to the Morales government has been split at least since 2011, when indigenous demonstrations where repressed, organisations divided by government action, NGOs persecuted and opponents vilified.

Conservative sectors and the agenda of capital were embraced, and state politics was personalised around Morales.

When the president was defeated in 2016 on a referendum that would allow him to run for a fourth term (his third under Bolivia’s current constitution, which allows for only one reelection) many on the left voted against it.

Nevertheless Morales pushed his name, arguing that it was a ‘human right’ to dispute elections.

Many argue this was a fraud – or a coup.

When elections took place last October, Morales seemed to be leading by a short margin. In Bolivia a second round of voting is mandatory if no candidate earns over 50% of the votes, or a 10 point advantage over the runner-up.

However, vote counting was mysteriously interrupted, and during the recount Morales came out elected in the first round.

Accusations of fraud where widespread, and demonstrations broke out in the streets. There was massive participation by the youth, for whom Morales is identified with the prevailing order.

The constituency of Morales’ party, MAS or the Movement for Socialism, also demonstrated, and violence ensued.

It should be clear that the Morales government was a far cry from posing any challenge to (foreign) capital domination. It was often undemocratic and repressive, and it had been opposed by sectors of the popular indigenous movement and the left.

However, amidst the crisis, the far right got on the move.

The racist oligarchy from eastern Bolivia also took to the streets. And when Morales resigned they acted rapidly to regain leadership of the country.

As both the vice-president García Linera and the Senate president Adriana Salvatierra had resigned following Morales’ call, reactionary senator Jeanine Áñez took charge in a session that MAS representatives did not attend.

In the meantime, violence escalated in the streets, often with a racist undertone. The Wiphala flag, identified with native people, was burned. MAS people and property were targeted, while the racist Eastern leader Fernando Camacho knelt in the presidential building with a Bible in hand.

Fresh elections are expected soon, but the current landscape seems unpromising for the people.


Fabio Luis Barbosa dos Santos is professor at the Federal University of São Paulo and author of Power and Impotence: A History of South America under Progressivism.

Evo Morales was not deposed, he publicly presented his resignation together with the vice-president and several of the main authorities of his government (including the highest parliamentary authorities of the MAS) when faced with overwhelming evidence of electoral fraud presented by an international audit of the Organisation of American States, and because the level of social and citizen discontent had become widespread in the country and had gone out of control.

Three days before that, there was a police mutiny of the middle and low command, as they refused to continue repressing social protests. This would also happen with the armed forces, who declared themselves unwilling to go out in the absence of police, and suggested to Morales that he resign to pacify the country, about an hour before Morales was already at a military airport in Chapare, Cochabamba, from where he went to Mexico in self-exile.

In the ensuing power vacuum, due to the aforementioned resignations and the abandoning of the country by Morales and other authorities, a constitutional presidential succession occurred where, by order of priority, Jeanine Áñez assumed the presidency of an interim government, with only the (constitutional) task of calling new elections.

For more than a month Bolivia has been going through an acute political and social crisis, due to suspicions and then the formal confirmation of electoral fraud by the MAS to favour the candidacy of Evo Morales.

But the crisis began with the referendum of February 21, 2016 which Morales lost. This for the first time fostered unity among the anti-Morales sections, who felt profoundly deceived the following year when the president appealed to the Constitutional Court of the Plurinational State to declare unconstitutional an article adopted years ago and give him the green light for a possible fourth term.

The government tried to dismiss the indignation generated by the electoral fraud. To begin with, Morales said it was only small groups of young protestors bought off with money and good grades who did not know how to blockade. He even offered to give workshops on how to blockade.

Then, as the strikes grew in all the cities of Bolivia, he resorted to tactics of intimidation and gave the green light to his supporters to lay siege to cities to “see if they can last”.

The confrontations and violence provoked hundreds of injuries and a number of deaths. Far from ending the blockades and strikes, they made them more radical.

The government has treated the mobilisation as a fascist and racist coup. It is true that sections of the reactionary right have celebrated the protests. In Santa Cruz, the main leader of the Civic Committee, Luis Fernando Camacho, comes from an ultra-right organisation called the Union of Cruceño Youth.

In other cities however, there have been quite different articulations by independent groups, with politicians from right and left leading the protests.

In the case of La Paz, the National Committee for the Defence of Democracy counts among its main leaders two ombudsmen who served under the Evo Morales government and had denounced human rights violations such as the repression of the indigenous march of TIPNIS in 2011.

For his part Carlos Mesa, who was vice-president during the neoliberal government of Sanchez de Lozada (2002-03) and became the main electoral opponent of Evo Morales, does not have a structured party base, and was more a vehicle for opposition at the ballot box than a key organiser of the protests.

The rebellion which Bolivia is experiencing is largely a spontaneous act, led particularly by young people against the abuse of power.

On Sunday November 24, after a days-long debate in the parliament, with the support of a majority of the MAS party Senate president Eva Copa (also of the MAS) together with interim president Jeanine Áñez enacted a law calling a fresh general election.

In more than a month of post-electoral conflict much has been written about the “coup d’état” that Morales denounced and that much of the international (progressive) left, especially with mediatic influence, repeated without critical arguments and without knowing the facts with precision.

It was about showing social, class and ethnic polarisation in a reality that is very intercultural and complex.

In any case, the next elections will define the political course forward.

The truth is that Bolivia is at the end of a type of political regime centred upon a person. A horizon of democratisation opens.


Pabel C. Lopez F. is a social researcher associated with CIDES-UMSA in La Paz, Bolivia. He holds a PhD in sociology and is currently a postdoctoral fellow at the University of Buenos Aires. 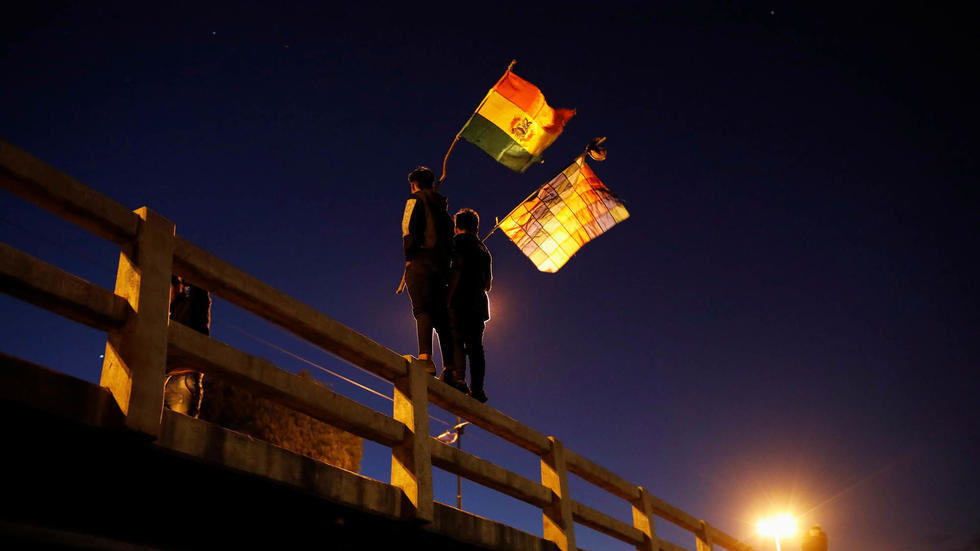 Tour of Duty: Not a Good Idea 22 hours ago

DU Economics Results Out, Many Marked Absent or Failed 23 hours ago

The New Crisis Lurking Behind Lockdown Relaxation 23 hours ago

India and Nepal In For A Prolonged Standoff?

US Rush To Afghan Peace Does Not Quite Add Up

India-China - No Give, No Take