NEW DELHI: Subrahmanyam Jaishankar, Minister of External Affairs,is in the news these days with the social media kicking up a storm asking him to resign in the wake of the brutal attack by masked goons on students and faculty of Jawaharlal Nehru University. Appeals to his ‘conscience’ as an ex-student of JNU are flooding Twitter from scholars and students alike, with all wondering at his ‘silence’.

Speak up, say the tweets,with some openly deriding him for his silence on the attack, and others requesting him to quit the government and speak up. He is being reminded over and over again, that unlike many in government, he has the benefit of the best education, owes his position to his alma mater and is being expected to take a stand. The tweets follow similar appeals to Bollywood actors Shahrukh Khan and Imran Khan after the police assault on students of Jamia Millia Islamia with the appeals to their ‘conscience’ to speak out for the students of the university they once belonged to ending in “deep disappointment.”

Jaishankar is presiding currently over one of the most difficult times being faced by India in terms of foreign policy. Over the years he was viewed as a pro-US diplomat, handpicked by former Prime Minister Manmohan Singh to steer India towards the controversial civilian nuclear agreement with the United States. A task he undertook with quiet passion, and was able to finish under the Narendra Modi government, where all the remaining agreements that have completely compromised India’s foreign policy ---to the point where we will have to agree to allowing US troops to be stationed in the country if US President Donald Trump embarks on his war-with-Iran mission---have been signed.

As a diplomat he displayed singular purpose in chasing the nuclear deal, and was said to be the strategic brain guiding Manmohan Singh through the barriers of Left opposition. The deal was not signed despite his best efforts, but he renewed these under Prime Minister Narendra Modi and moved out of officialdom to become a member of the BJP and subsequently the Minister of External Affairs.

Jaishankar is a trusted Minister, and played a major role according to sources in choreographing the Howdy Modi event in Houston that seems to have become a diplomatic nightmare since, according to observers. ‘Ab ki baar Trump ki sarkar’ might have alienated the Democrats as reported by the media across, but has also come in the way of relations with Iran now. Jaishankar has been working the phone lines to both Tehran and Washington but the Indian space for negotiations is limited in wake of the stategic military agreements that were being negotiated since 2002 along with the nuclear deal.

Significantly, in response to the Twitter campaign Jaishankar responded with “have seen pictures of what is happening in JNU. Condemn the violence uneqivocally. This is completely against the tradition and culture of the university.” This has over 25,000 likes and any number of comments of which the first 12 are being reproduced below in the order they appear on Twitter: 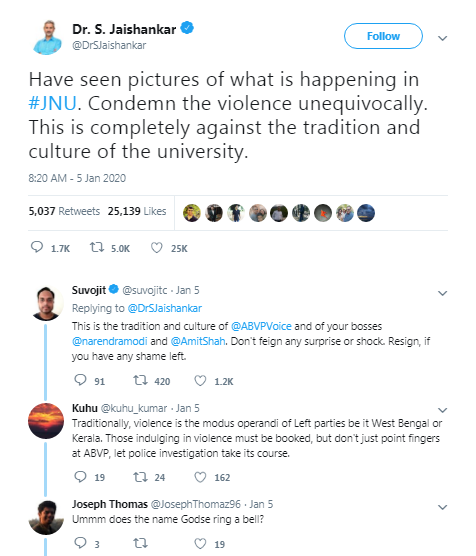 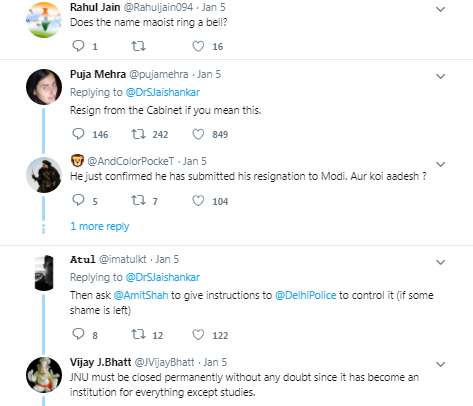 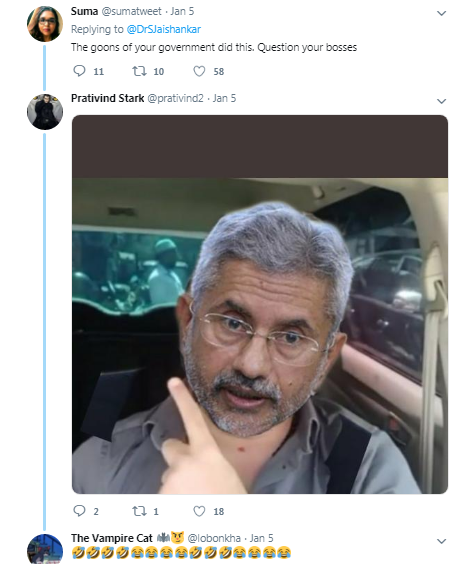 ‘Politics is the Art of the Possible’: Akeel Bilgrami on Secularism in India 10 hours ago

Iran - Nothing is Forgotten, Nothing Forgiven

After Soleimani: The Cost-Benefit For US, Israel, Saudi And Iran

Soleimani’s Murder: Building Into A Terrible Crescendo In West Asia