Israeli occupation forces continue to attack Palestinian communities as they struggle to hold back the threat from the coronavirus pandemic. 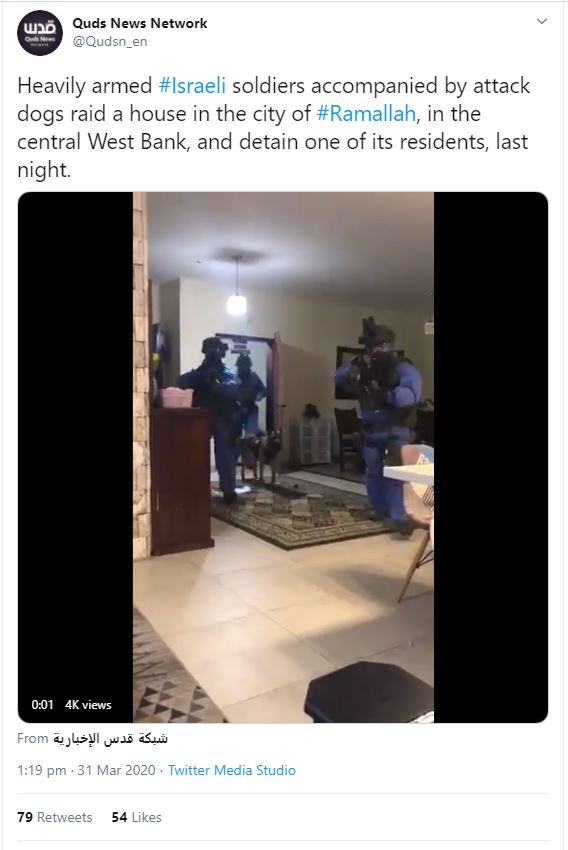 According to local media, occupation forces detained at least four Palestinians during overnight raids on homes in and around the West Bank city of Ramallah, the seat of the Palestinian Authority.

On Tuesday evening, Israeli forces confiscated food parcels that were due to be distributed to quarantined families in Sur Baher, a village south of Jerusalem.

According to Palestinian media, occupation forces raided a school where the parcels were being prepared, detained four members of the local emergency committee and seized 300 food packages.

The charitable distribution was supported by contributions from Palestinian citizens of Israel.

Israeli forces also carried out raids and detentions in the occupied East Jerusalem neighborhood of Shuafat. 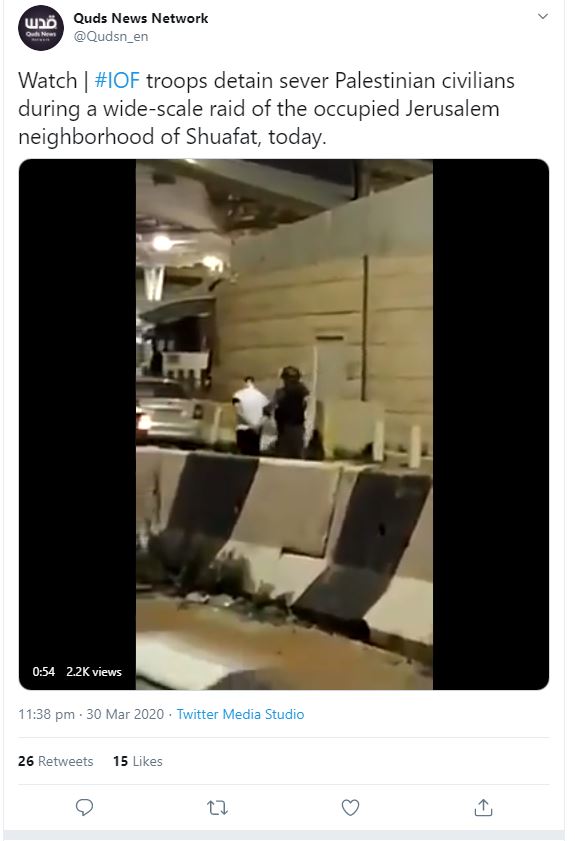 Other videos show Israeli forces assaulting and detaining Palestinians without taking any precautions to prevent potential transmission of the virus:

In this incident on Tuesday, occupation forces in the East Jerusalem village of Issawiyeh, violently wrestled and restrained a Palestinian man in front of his young son: According to local media, the Israeli forces attacked a group of Palestinians who had been praying outside a local mosque.

As of Tuesday, there were 119 confirmed coronavirus cases among Palestinians, the vast majority of them in the occupied West Bank, though the number of cases is growing in Gaza.

According to the UN humanitarian coordination agency OCHA, the relatively low number “may reflect the limited testing capacity.”

Israel, whose caseload has surged to more than 5,000, is struggling to contain the outbreak.

Even Prime Minister Benjamin Netanyahu, army chief of staff Aviv Kochavi and other senior officers are now in isolation after coming into contact with infected persons.

The outbreak in Israel represents a direct threat to Palestinians.

Since 23 March, Israeli authorities have been expelling thousands of Palestinian workers from Israel to the occupied West Bank, “after some of them showed fatigue and high temperatures,” according to the human rights group Euro-Med Monitor.

“Most of the deportations took place without medical examinations or special arrangements with the Palestinian authorities, to ensure that workers are treated and examined upon return to ensure their well-being, which amounts to racial discrimination.”

The group stated these practices “pose a public health threat and makes it easier to spread COVID-19 among Palestinians.”

Euro-Med Monitor added that the first Palestinian to die from COVID-19, a woman in the West Bank village of Biddu, was infected by her son who works in Israel.

A large number of the Palestinians who tested positive for the coronavirus “were infected during work in Israel or Israeli settlements in the West Bank,” the group said on Tuesday.

The Palestinian Authority has placed the areas of the West Bank that it controls under a lockdown since 22 March.

It has also recalled all Palestinian workers employed in Israel to the West Bank, where they are supposed to go into home quarantine for two weeks.

But as OCHA notes, “the scope of implementation remains unclear, as the construction sector in Israel, where most workers are employed, has remained active.”

There are also “no means of ensuring that they follow the home quarantine regulations.”

OCHA praised the “close cooperation between the Palestinian and Israel authorities” since the start of the coronavirus crisis.

The UN agency credits Israel for facilitating the import of 10,000 test kits by the Palestinian Authority and for holding a training for medical staff at East Jerusalem’s al-Makassed hospital.

Yet Israel’s continued attacks on the Palestinian population, potentially exposing them to contagion, make a mockery of any Israeli goodwill.

There is also mounting alarm for the well-being of some 5,000 Palestinian political prisoners held by Israel.

“Our growing concern for Palestinian prisoners and detainees during the ongoing COVID-19 pandemic grows out of the systematic and routine medical negligence inside Israeli detention and interrogation centers,” prisoners rights group Addameer said on Tuesday.

In 2019, five Palestinians died in Israeli custody, three as a result of medical negligence, while hundreds suffer from chronic diseases that go untreated, according to Addameer.

The group is urging an international campaign to call for the release of all the prisoners.

Since early March, Israel has banned all family and lawyer visits to detained Palestinians, citing the coronavirus crisis.

Israeli prison authorities are also refusing to install landlines to allow prisoners to speak to their families – as previously promised – exacerbating their isolation.

Four Palestinian prisoners who came into contact with an infected Israeli prison worker in mid-March have now been taken out of quarantine.

Two were released to their families in the West Bank without being tested for the coronavirus, and two were returned to prison, Addameer said.

Since Monday, health authorities in Gaza have announced three new coronavirus cases, bringing the total in the territory to 12.

All those infected were travelers quarantined on return to Gaza, or security officers who had been in contact with them, who are also in quarantine.

There have as yet been no reports of community spread among the general population.

Yet there have been more warnings of the catastrophe that could ensue if such an outbreak occurs.

“The capacity of the Palestinian health system to cope with an expected increase in patients remains severely impaired by longstanding challenges and critical shortages, particularly in the Gaza Strip,” the UN humanitarian coordination agency OCHA, said.

“People in refugee camps and other poor, densely populated areas across the [occupied Palestinian territories] face a higher risk of contagion due to overcrowding and inadequate sanitation.”

Many Palestinian and international organizations and health experts have already warned of looming catastrophe if the pandemic reaches the population in Gaza, where the health system, water and sanitation and the economy have been severely degraded by three major Israeli military assaults and a tight siege in recent years.

Due to the virus, authorities in Gaza announced on Tuesday that educational institutions would remain closed indefinitely, along with other measures aimed at avoiding an outbreak.

Authorities in Gaza announced that they were allocating $1 million for emergency payments to 10,000 families who have lost their incomes due to the pandemic, and that another $300,000 had been donated from the salaries of government employees for redistribution to low-income families.

Turkey has agreed to prepare the hospital it supports in Gaza to care for COVID-19 patients.

International organizations have appealed for $34 million in emergency funding to fight the pandemic in the West Bank and Gaza, of which $9 million has already been contributed by development agencies, as well as the British and Irish governments.

This comes after Qatar previously pledged $150 million over six months in the effort to fight COVID-19 in Gaza.

On Tuesday, 100,000 families in Gaza began receiving $100 each donated by Qatar to help them through the crisis caused by the pandemic.

India and Nepal In For A Prolonged Standoff? 8 hours ago

India and Nepal In For A Prolonged Standoff?

US Rush To Afghan Peace Does Not Quite Add Up

India-China - No Give, No Take