'We want Christmas without occupation,' and 'Peace, Freedom and Justice.'

NEW DELHI: A group of Palestinian protesters, several of whom were dressed as Santa Claus, gathered to protest against ‘Israeli occupation’ in Bethlehem, a city located in the occupied West Bank about 10 km from Jerusalem.

The Israeli army, who claimed that protesters threw rocks, used tear gas to disperse the crowds.

The images and videos however, make for powerful imagery as Santa Claus’ held up signs reading “We want Christmas without occupation,” and “Peace, Freedom and Justice.” 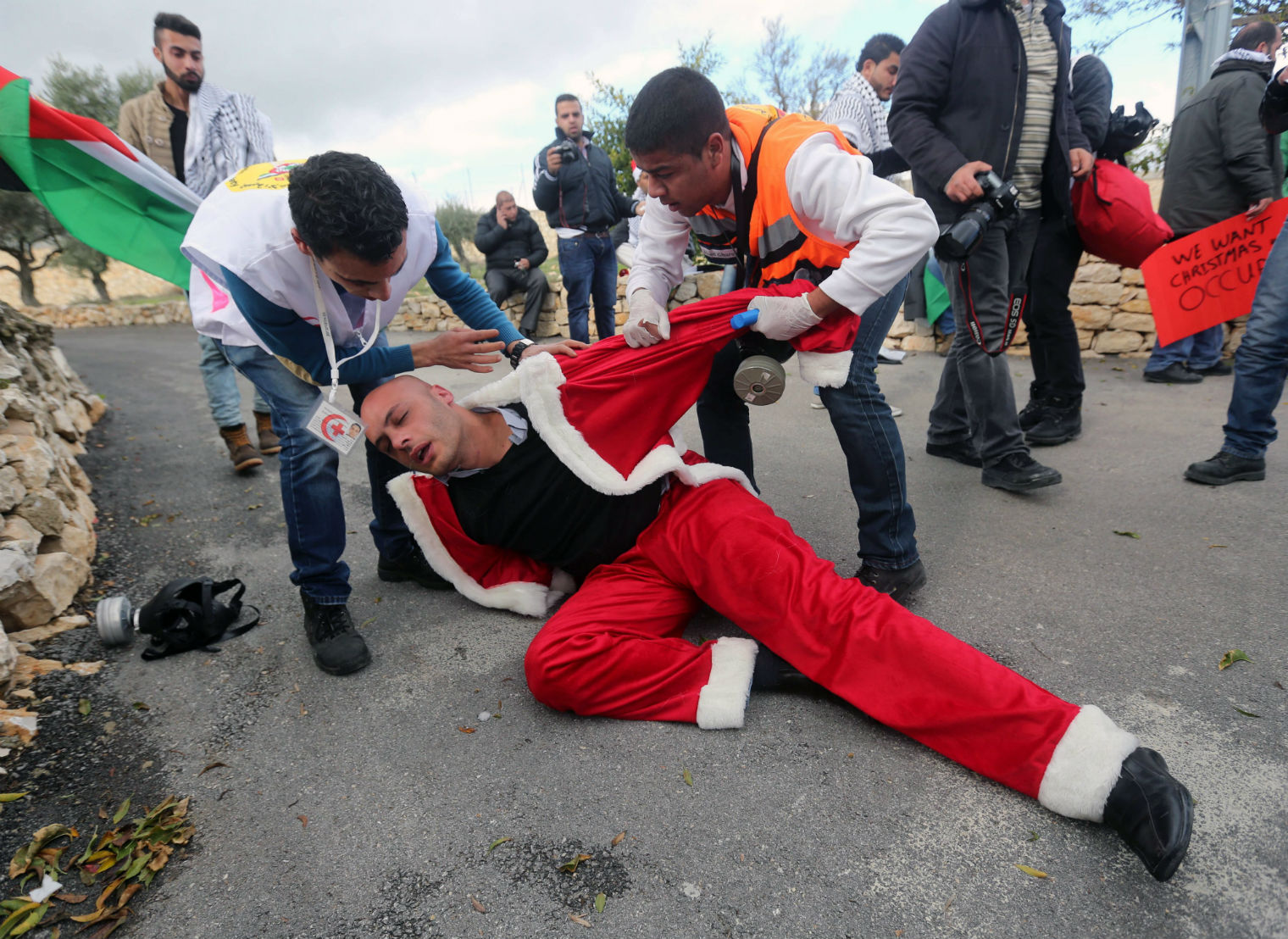 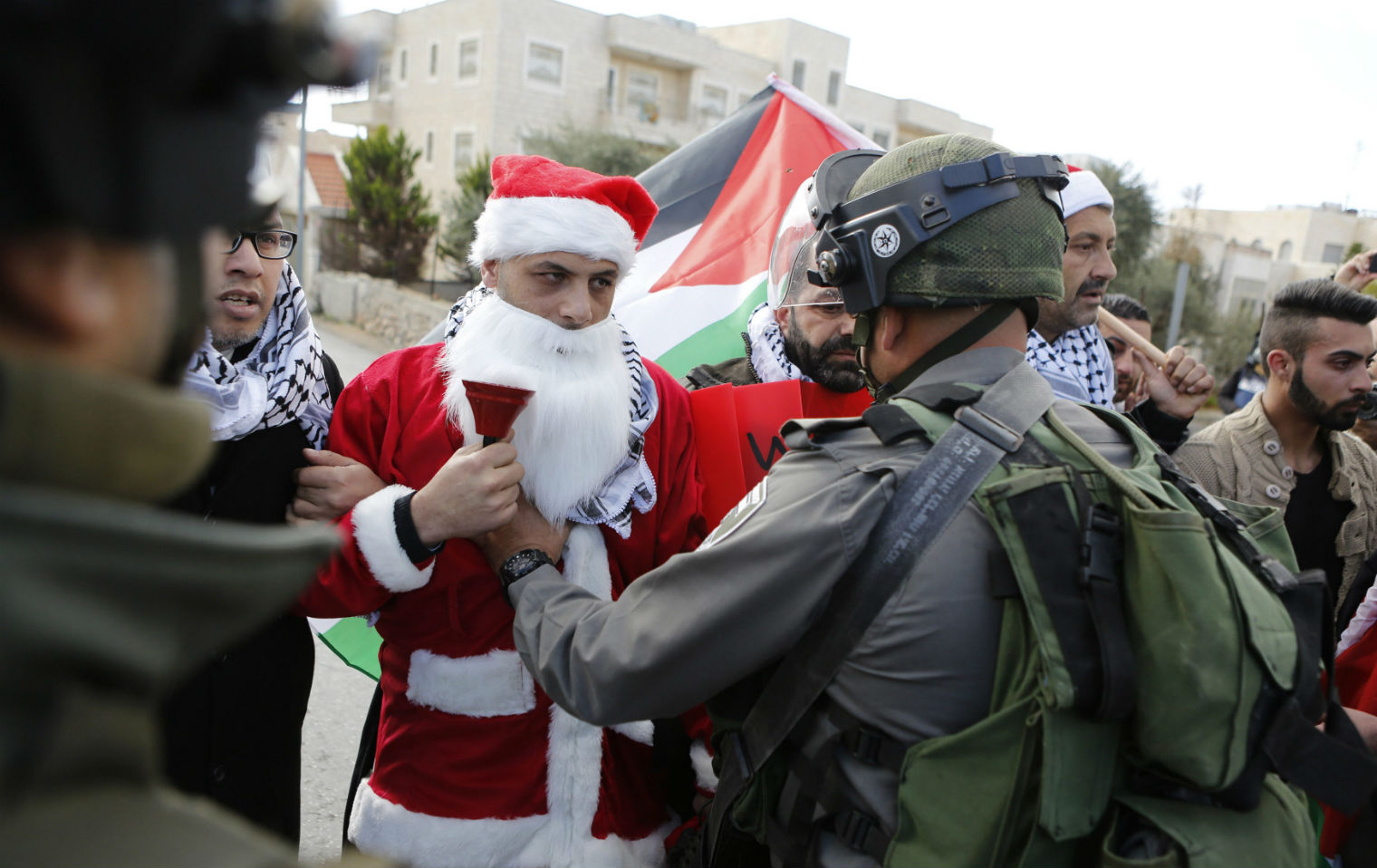 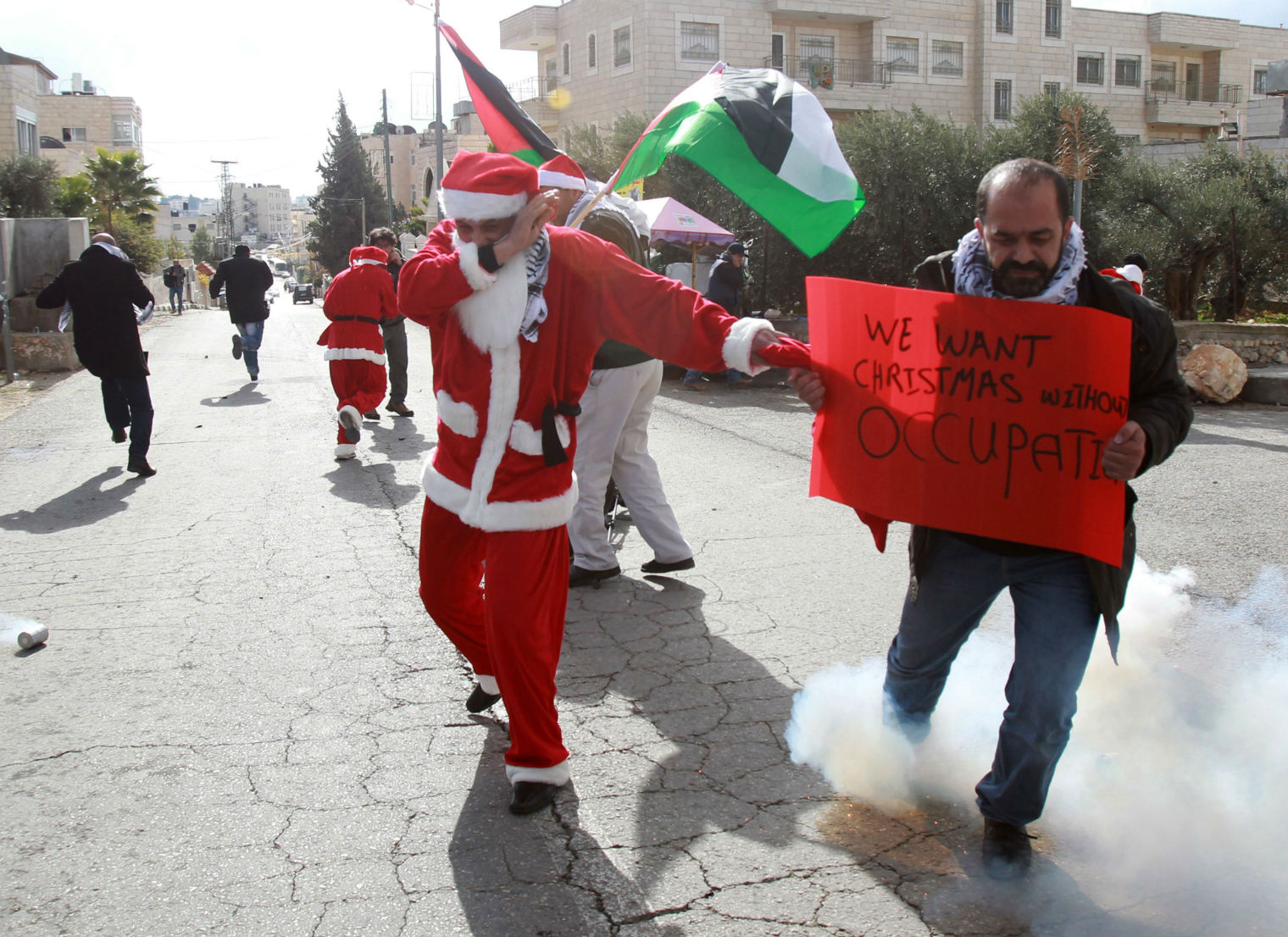 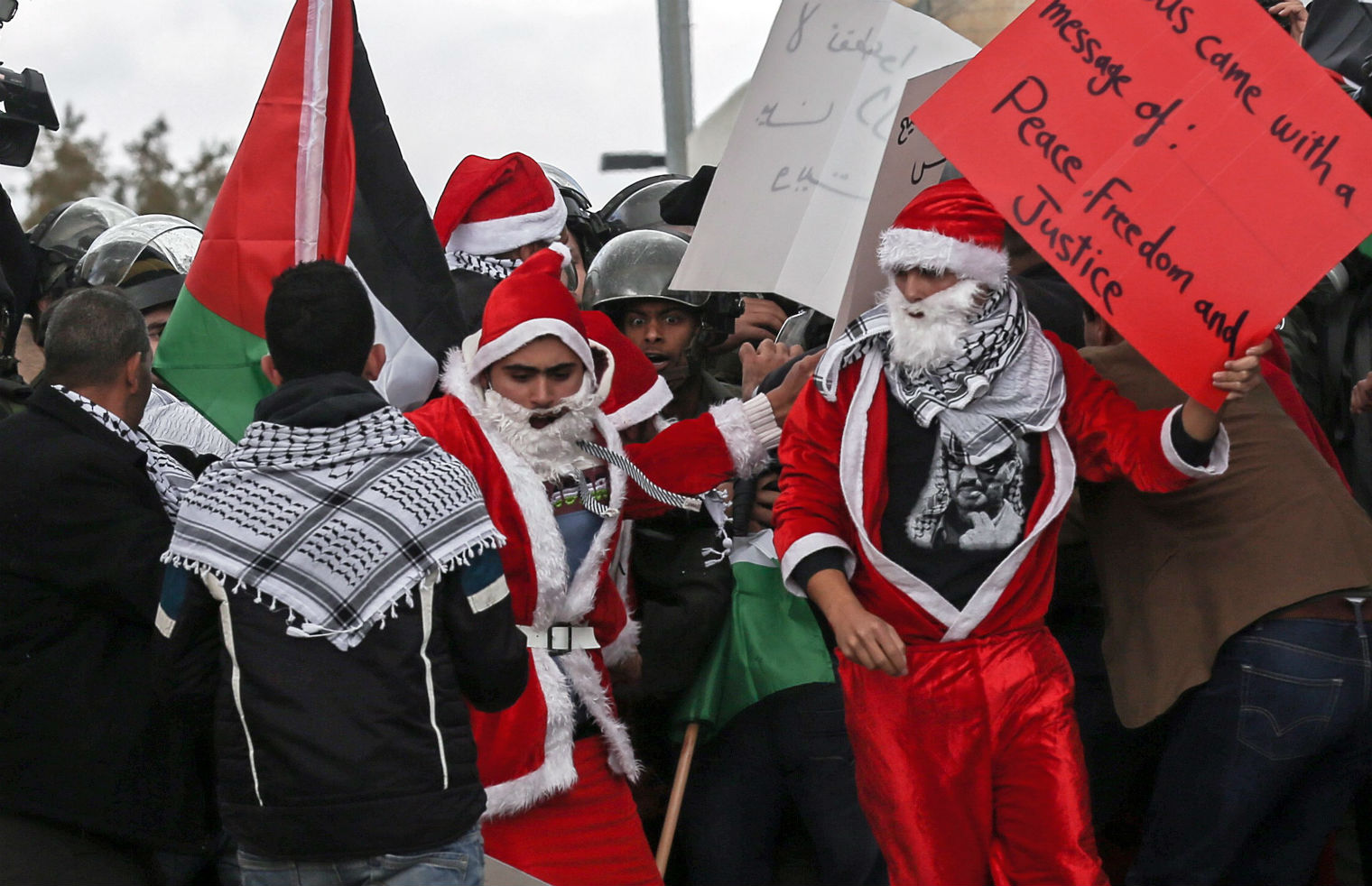 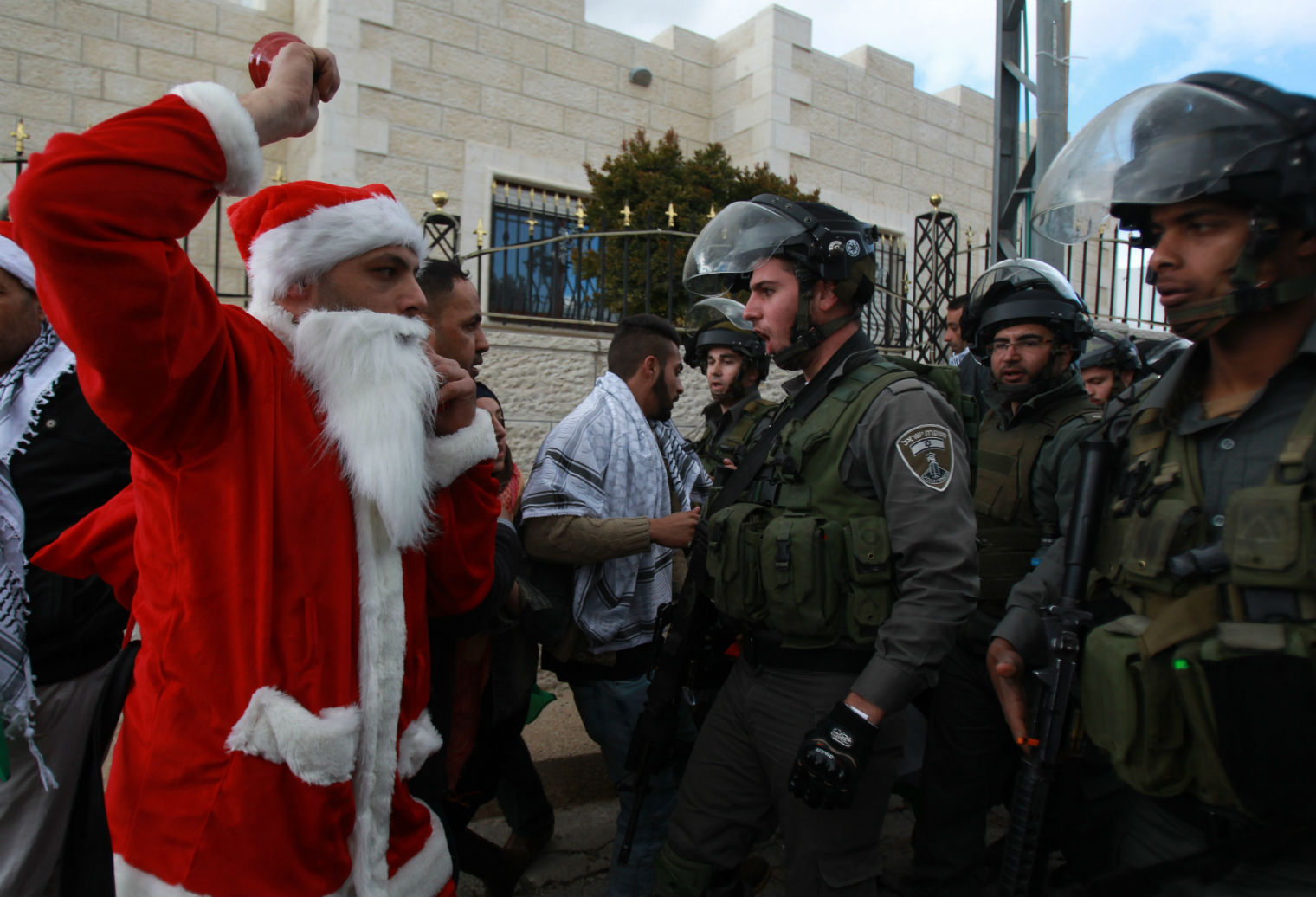 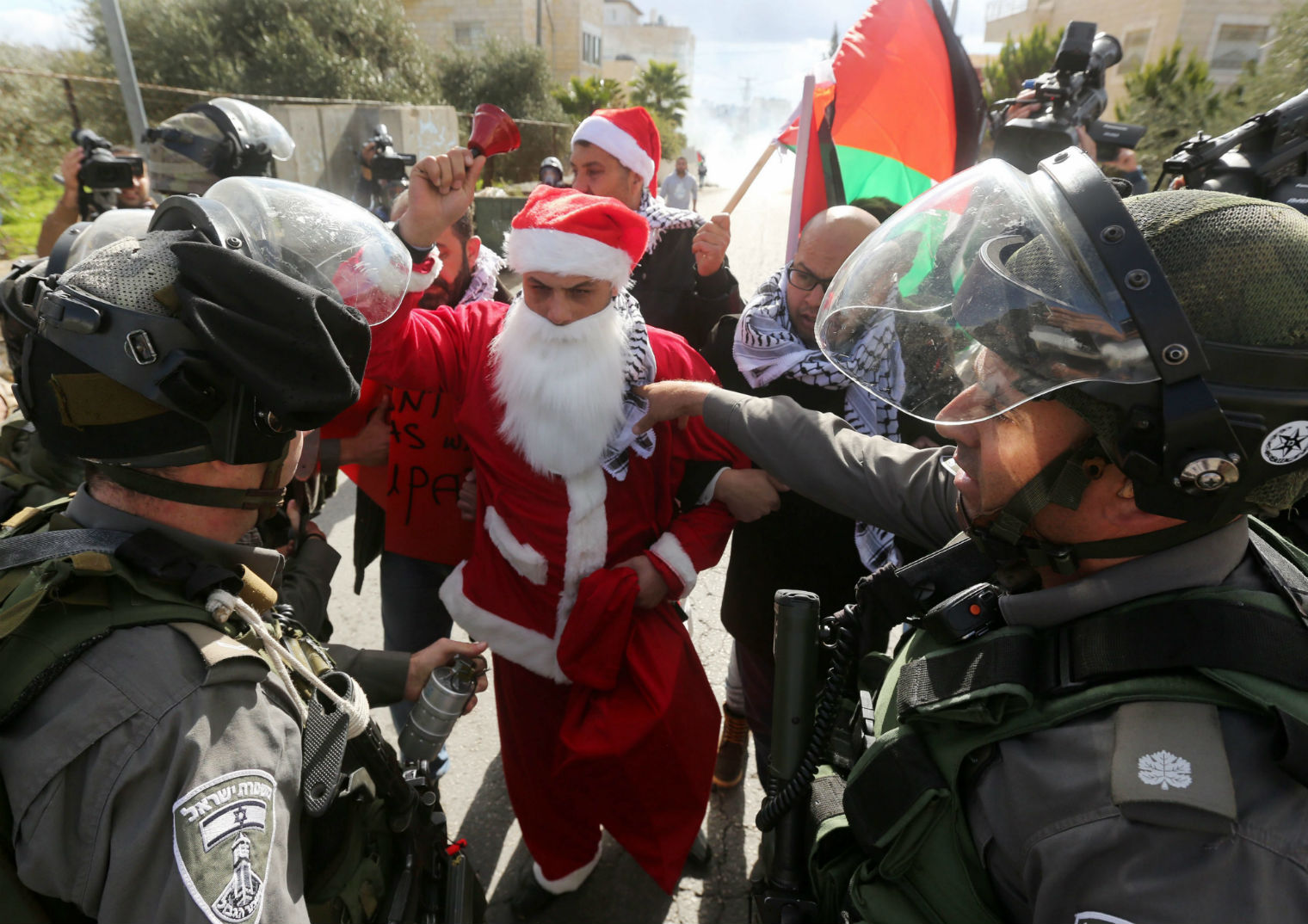 Watch a video of the incident here:

Tensions have been high in the area in recent months, reaching a boiling point over the issue of access to the Al Aqsa Mosque, the city’s most contested holy site. In addition to clashes, a series of violent attacks -- including the storming of a Jerusalem synagogue during morning prayers that killed four people -- further embittered the two sides. Other incidents have included three Israeli civilians being stabbed in the West Bank, an Israeli soldier knifed in Tel Aviv, two people being killed when a Palestinian man rammed his car into a transit stop, all of which, in turn, followed the shooting of a Palestinian-American teen by Israeli security forces, that led to widespread protests.

Clashes took place at the holy site itself, with Palestinians alleging an illegal storming of the mosque as right-wing Israelis -- who had stepped up campaigning asking for Jews to be allowed to pray at the site -- were accompanied by 300 security forces. Palestinian officials said Israeli forces crossed the threshold of the mosque for the first time since 1967, while Israeli police have denied that they entered the building.

The crisis followed an announcement that Israel will be fast-tracking plans to build 1060 new apartments in East Jerusalem -- an attempt to address the right-wing lobby in Israel, specifically the Council of Jewish Communities in Judea and Samaria and the Jewish Home Party, that have been pushing Netanyahu to speed up construction in East Jerusalem. East Jerusalem was occupied and annexed in 1967 -- and thereby, outpost construction beyond the 1967 line by Israel is a bone of contention between Israelis and Palestinians and constitutes what most of the world considers illegal settlements.

Palestinian officials reacted to the news with a warning that it could lead to unrest. “We believe such unilateral acts will lead to an explosion,” Jibril Rajoub, a senior figure in Fatah told reporters. “Mr. Netanyahu should not expect a white flag from the Palestinian people.”

A white flag was not waved, and rising tensions prompted Israeli security forces to close the Haram al-Sharif compound that houses the al-Aqsa mosque. The move was described by Palestinian President Mahmoud Abbas as a "declaration of war."

The decision to shut down the mosque itself followed a failed assassination attempt on an Israeli-American activist whose organization strives to "liberate" the holy site of al-Aqsa mosque from Islamic "occupation." Israeli security forces then shot and killed a Palestinian man they believed responsible, leading to protests and allegations of indiscriminate killing -- a rouse that the Palestinians have raised repeatedly.

The tension in the region comes on the heels of 50 days of violence that left over 2500 Palestinians dead. Even at the time, as a peace deal was signed between the Palestinians and Israelis, Israel followed it with an announcement that it will be appropriating 400 hectares of land in the occupied West Bank’s Etzion settlement bloc near Bethlehem, which anti-settlement proponents have termed the largest land grab in 30 years.

The issue of outpost construction was a major point of contention in the US brokered peace process between Israel and the Palestinian Authority, which eventually failed on account of the unity deal between Hamas and Fatah. In response to the unity deal, Israel had announced that it would approve plans to build 1500 settlement homes in the West Bank.

Reports show that the number of Israeli settlements being constructing in the West Bank more than doubled during 2013. Work began on 2,534 new housing units in 2013 compared to 1133 in the previous year.

Aid groups had pointed to an increase in demolitions and displacement of Palestinian officials since the renewed US-backed peace negotiations began compared with the same period in 2012. The number of demolitions increased by almost half and the displacement of Palestinians by nearly three quarters between July 2013 and the end of the year, said a statement released by 25 aid organisations working in the occupied West Bank and East Jerusalem. The aid groups said that of the 663 Palestinian structures torn down last year, the highest number in five years, 122 were built with international donor aid.

Israel had previously announced plans for 382 new homes in the West Bank, following the approval of plans for 272 new homes earlier in January 2014. The approval of plans for 1500 homes was a significant increase, and this announcement to build 1000 new settlements and now an additional 200 in East Jerusalem will further embitter relations, especially as it is indicative that Israel remains disinterested in peace or a long-term solution to the crisis in the middle east.