Where the Spirit Does Not Die - Palestine

One Palestinian was killed by Israeli occupation forces during the month of July.

Ibrahim Abu Yaqoub, 29, was shot in the neck by soldiers, who claimed that the slain man and a companion were throwing Molotov cocktails at an army post. The mayor of Salfit, the West Bank governorate where the shooting occurred, said that Abu Yaqoub was killed without justification.

Twenty-six Palestinians have died by Israeli fire so far this year, 17 of them in the West Bank.

In Rafah, southern Gaza, Aseel Mahmoud Hamad Dheir, 34, died from wounds sustained during an Israeli airstrike on her home in the summer of 2014.

Some 2,200 Palestinians in Gaza were killed during 51 days of bombardment that summer, including around 1,500 civilians, one-third of them children.

Also during July, a long-serving Palestinian prisoner died after being held by Israel for 26 years. Palestinian human rights groups and political parties accused Israel of years of medical neglect in the death of Saadi al-Gharabli, 75.

Coronavirus cases soared in Israel and the West Bank in July. The epicenter of the West Bank outbreak is Hebron, followed by East Jerusalem, where Israel failed to set up testing facilities in a timely manner and hindered the procurement of essential equipment by hospitals.

As of 1 August, there were more than 15,000 confirmed cases of COVID-19 in the West Bank and Gaza with 85 deaths since the beginning of March.

New cases were detected among travelers returning to Gaza, where there has been no community outbreak of the virus so far, and one death.

Israel’s COVID-19 response denied basic human rights to Palestinians on both sides of the Green Line, a human rights group stated in a report submitted to the United Nations in July.

Israel walked back from formally annexing West Bank land despite Prime Minister Benjamin Netanyahu’s election campaign pledge to do so, while de facto annexation continued on the ground.

In July, Israel demolished and seize Palestinian-owned structures in the West Bank despite the pandemic. More than 150 Palestinians have been displaced from their homes due to Israeli demolitions and seizures since the beginning March.

Settler attacks on Palestinians and their property were on the rise, including the torching of a mosque and poisoning of livestock ahead of the Eid al-Adha holiday.

Israeli forces seized some 100 food boxes from a Palestine Red Crescent Society storage center in East Jerusalem in July. Israel said that it confiscated the food boxes, which were going to be given to families isolating at home, because the distribution hadn’t been coordinated with authorities.

Two cultural institutions in East Jerusalem were raided by Israeli police in July in what Palestinian groups said was an attack on civic space in the city.

Palestinian groups have pointed to mounting pressures and shrinking space in which to operate as they seek to build global solidarity and pursue war crimes investigations at the International Criminal Court. 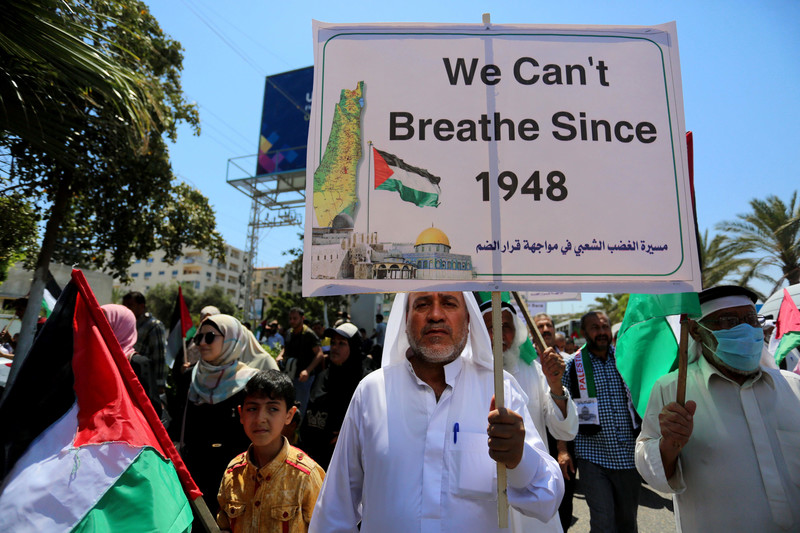 Palestinians in Gaza City borrow a slogan frequently used at Black Lives Matter demonstrations in the US during a protest against Israeli annexation on 1 July. (Ashraf Amra/APA images) 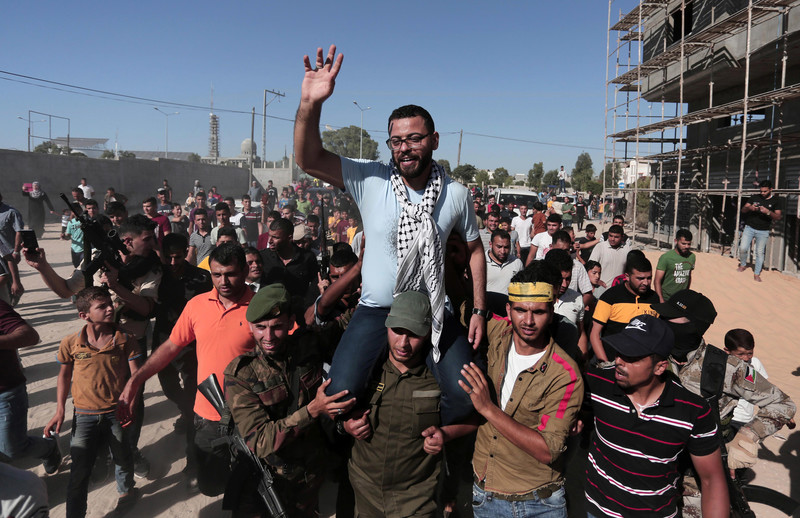 Newly freed Palestinian prisoner Iyad al-Jirjawi, 34, is welcomed home upon his release from an Israeli prison, Khan Younis, southern Gaza Strip, 2 July. Israel had faced calls to release al-Jirjawi, who served 9 years in prison, after he was diagnosed with a brain tumor. (Ashraf Amra/APA images) 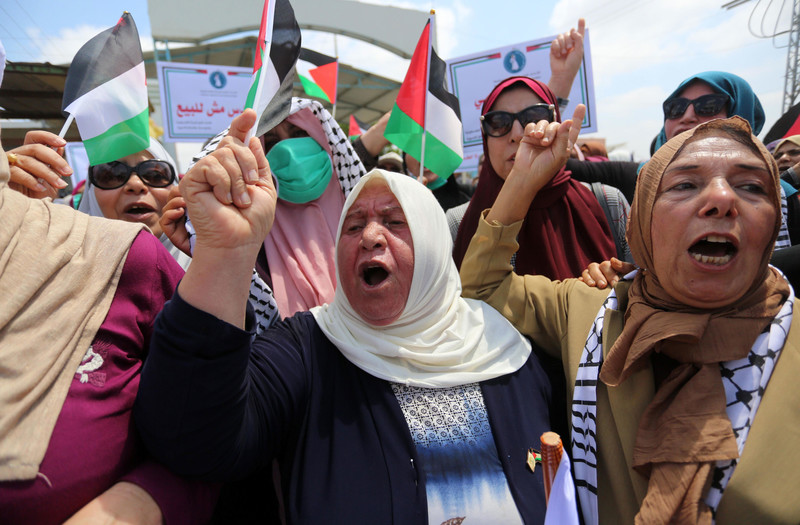 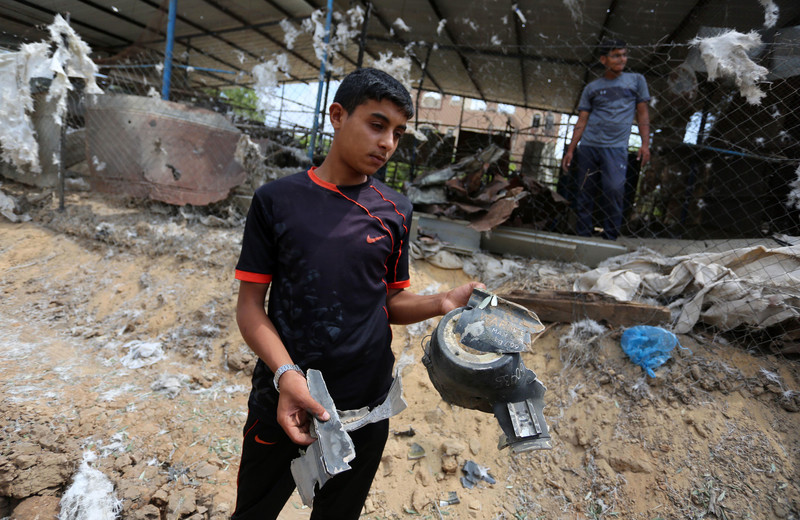 A Palestinian boy holds shrapnel from an Israeli airstrike in eastern Gaza on 6 July. Three rockets were fired from the northern Gaza Strip into Israel the prior evening as tensions flared amid Israeli plans to annex parts of the West Bank. (Ashraf Amra/APA images) 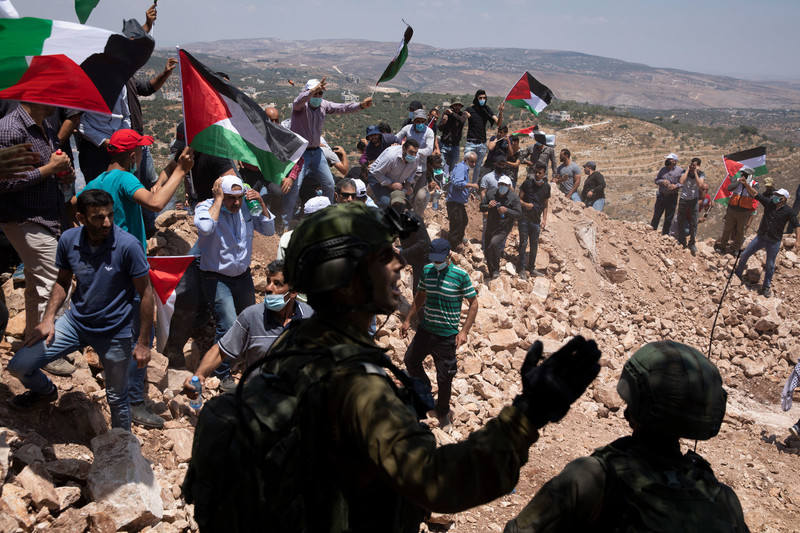 Palestinians protest against a new Israeli settlement outpost in the West Bank town of Asira al-Shamaliya near the northern West Bank city of Nablus on 10 July. Israeli soldiers prevented the protesters from reaching the outpost site and dispersed the crowd with gas and stun grenades. (Oren Ziv / ActiveStills) 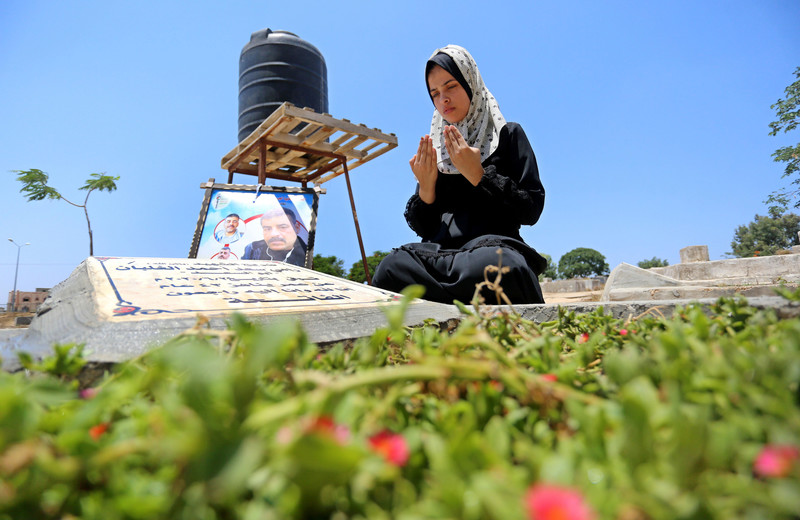 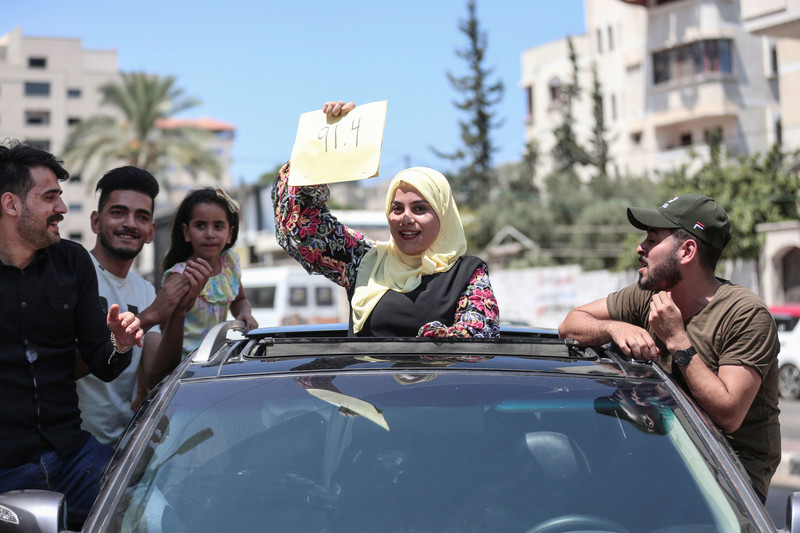 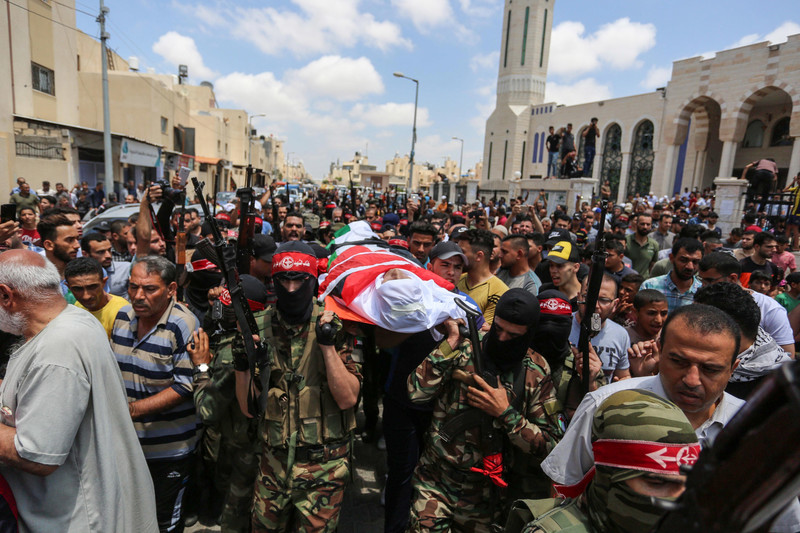 Palestinians take part in the funeral of Jabr al-Qiq, in Rafah, southern Gaza Strip, on 13 July. Al-Qiq, a retired Palestinian Authority brigadier-general, was murdered, allegedly by the sons of a man he killed at the order of a leftist faction during the first intifada. Al-Qiq had been imprisoned by Israel for 15 years and was released after the PA assumed power in Gaza. (Ashraf Amra/APA images) 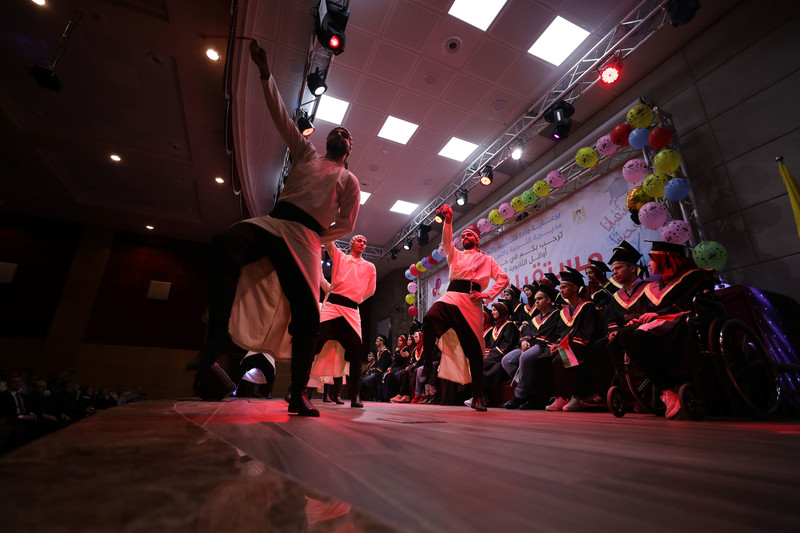 Top high school students are honored at a Gaza City event organized by the Ministry of Education on 14 July. (Mahmoud al-Hindi / APA images) 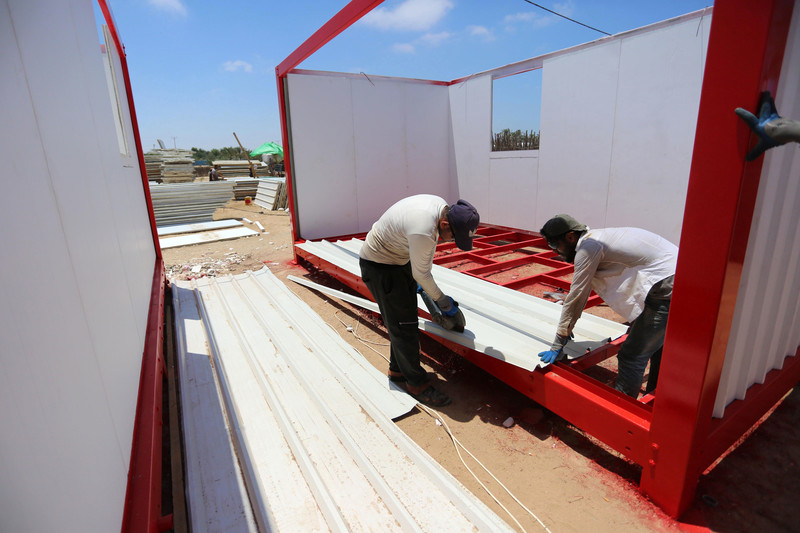 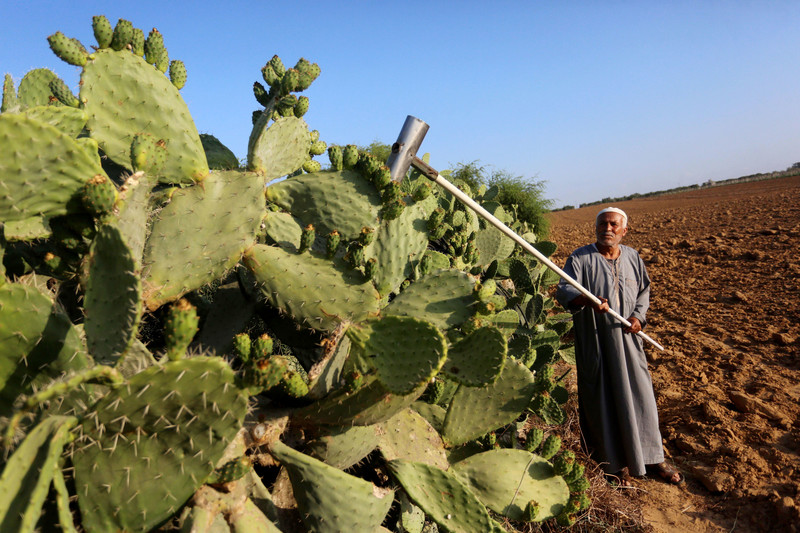 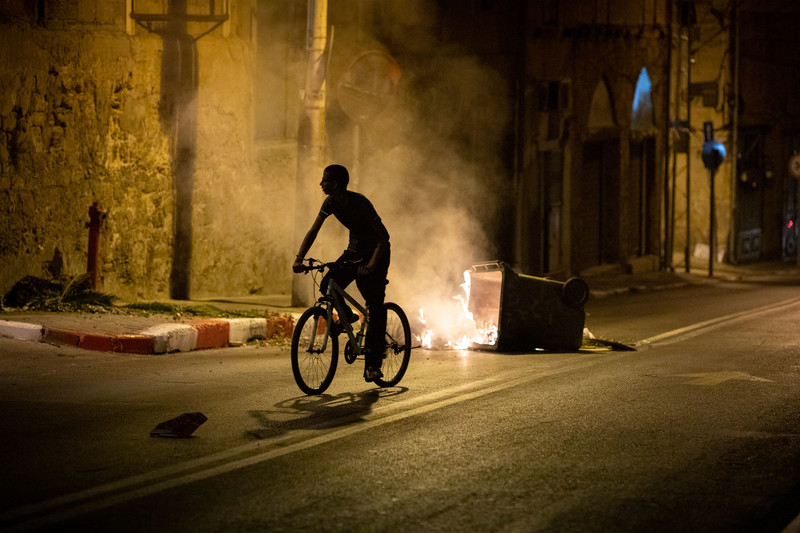 A bicyclist rides on a street in Jaffa as Israeli police disperse Palestinians protesting against the Tel Aviv municipality’s plan to build a homeless shelter and commercial space over an 18th-century Muslim cemetery, 19 July.(Oren Ziv / ActiveStills) 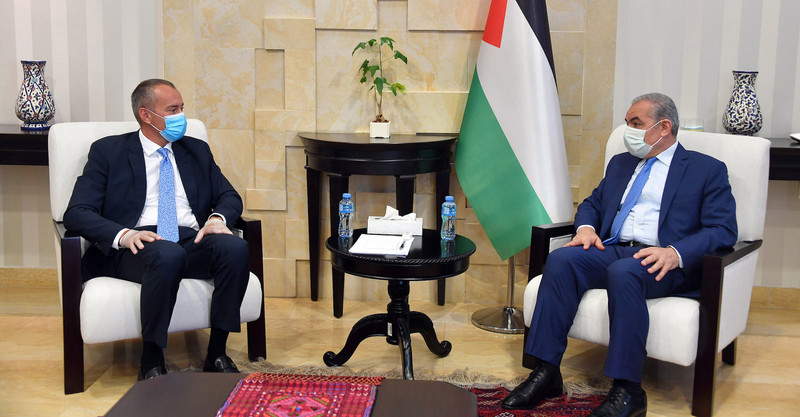 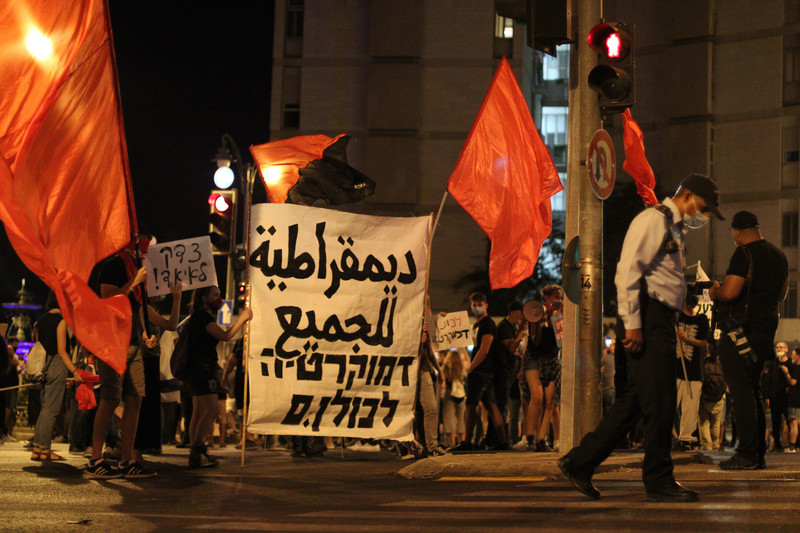 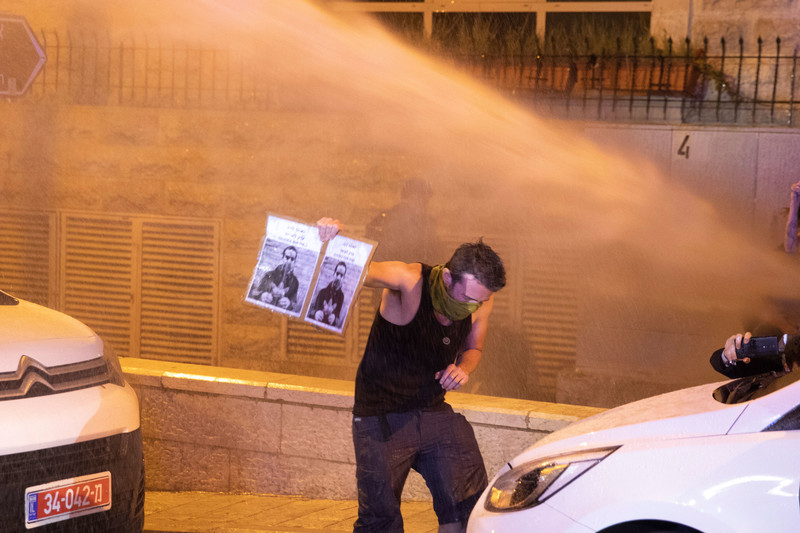 An Israeli protester holds a poster of Iyad al-Hallaq, a Palestinian killed by police in East Jerusalem in May, while being sprayed by a water cannon outside Benjamin Netanyahu’s official residence in Jerusalem on 22 July.(Oren Ziv / ActiveStills) 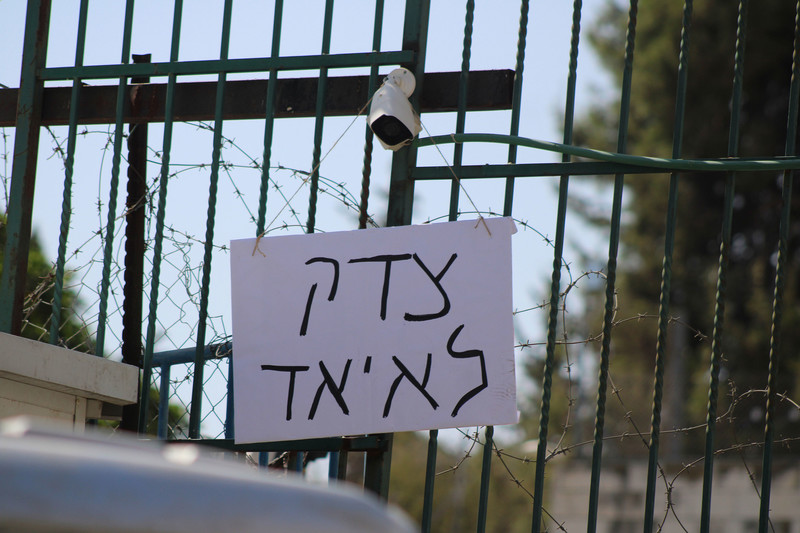 Israeli activists hang signs on security cameras in the Old City of Jerusalem where Iyad al-Hallaq was killed by police in May. The signs demand the release of security camera footage of al-Hallaq’s killing; police claim that cameras at the site were not working at the time. (Sharona Weiss / ActiveStills) 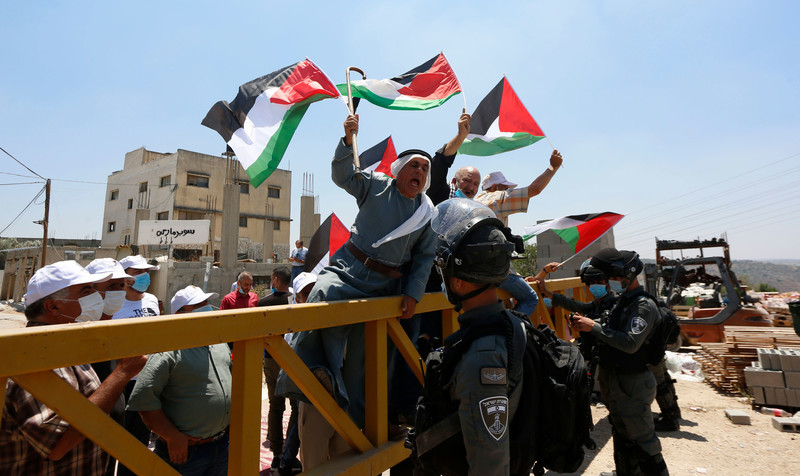 Palestinians protest against Israeli settlements and annexation in the village of Haris, southwest of the West Bank city of Nablus, on 24 July. ( Shadi Jarar’ah / APA images) 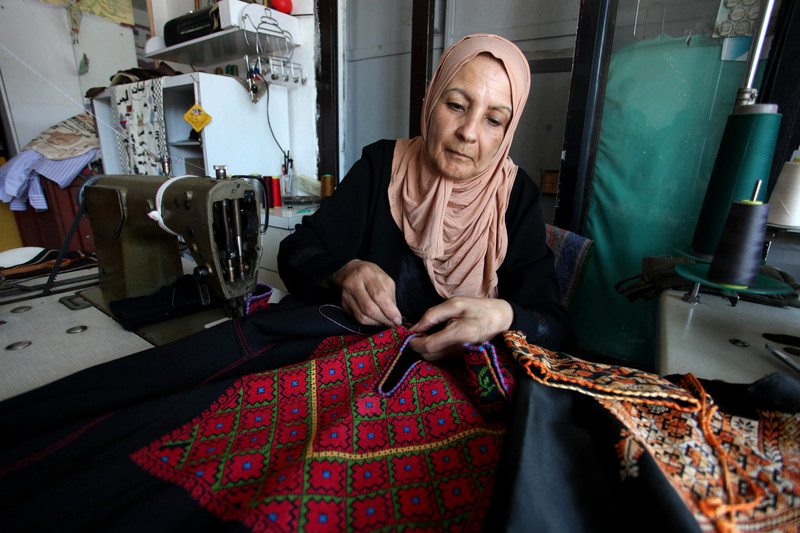 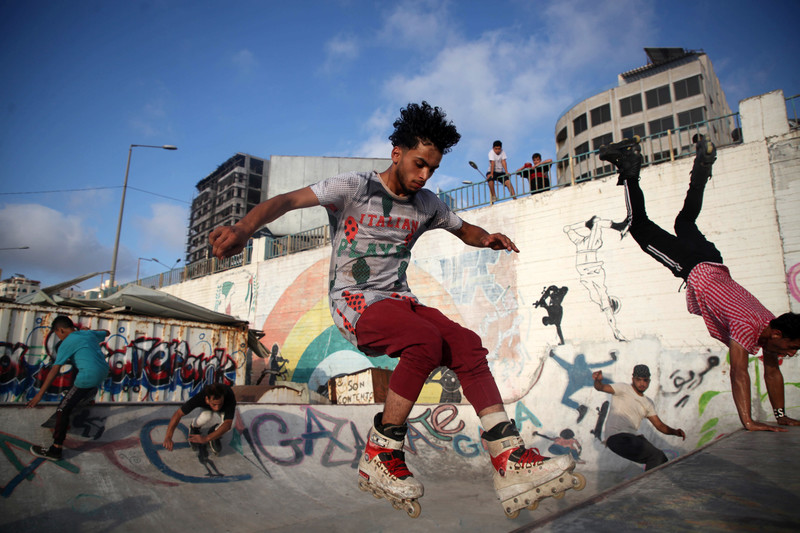 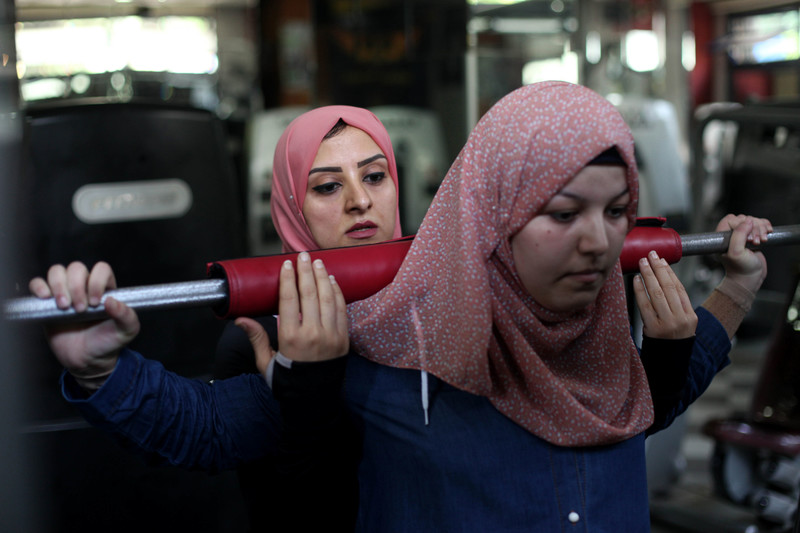 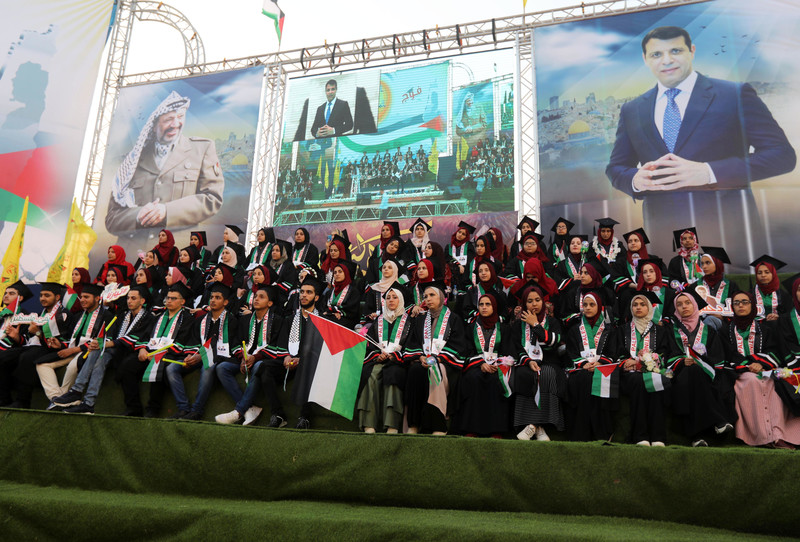 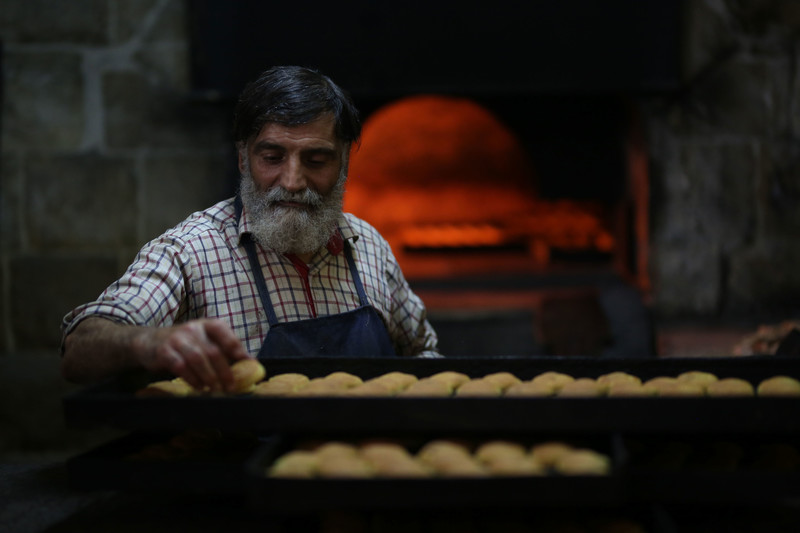 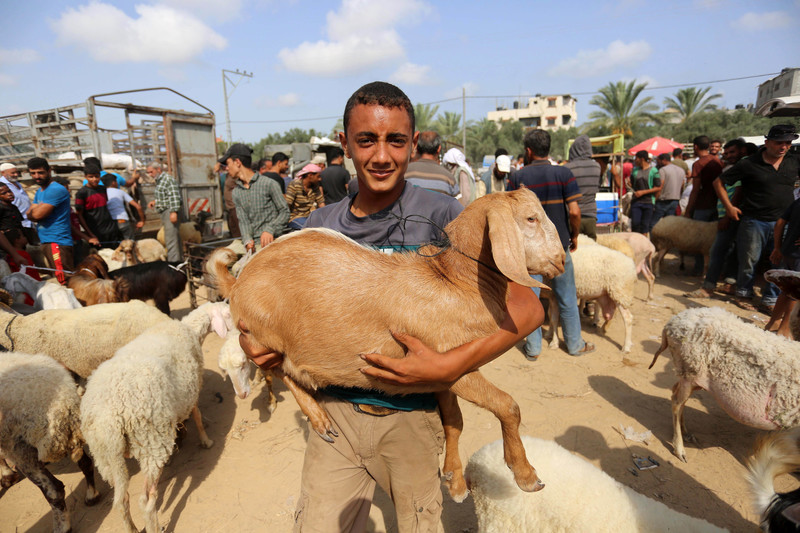 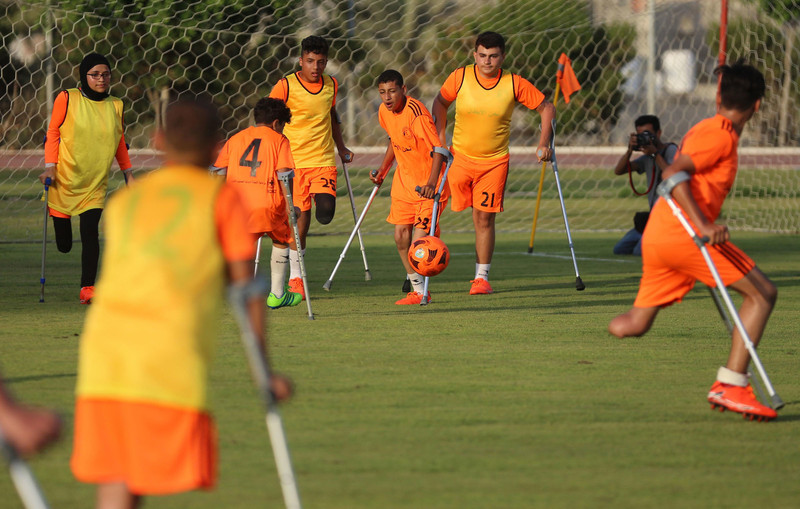 Athletes compete in the final match of an amputee football league at Yarmouk stadium in Gaza City on 29 July.(Ashraf Amra / APA images) 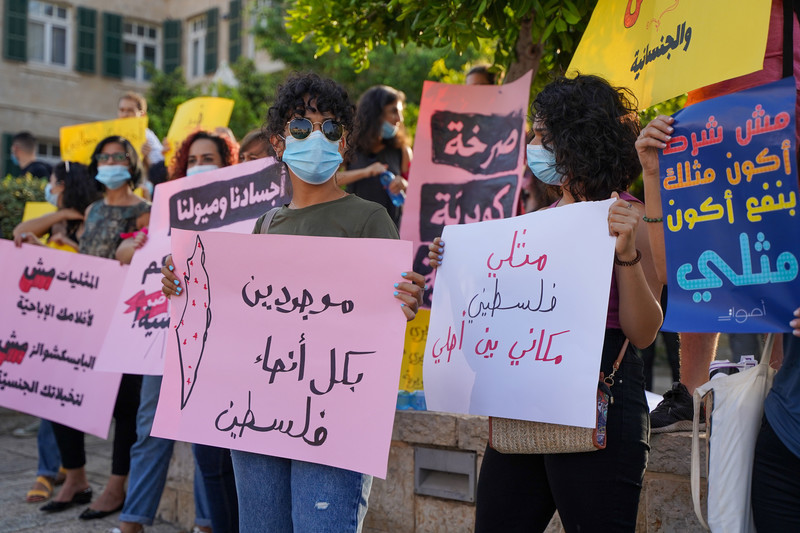 Palestinians gather in Haifa calling for safety and liberation on 29 July. The march was organized by alQaws for Sexual and Gender Diversity in Palestine along with other LGBTQ and feminist Palestinian organizations to protest against patriarchal, colonial and capitalist oppression. (Maria Zreik / ActiveStills) 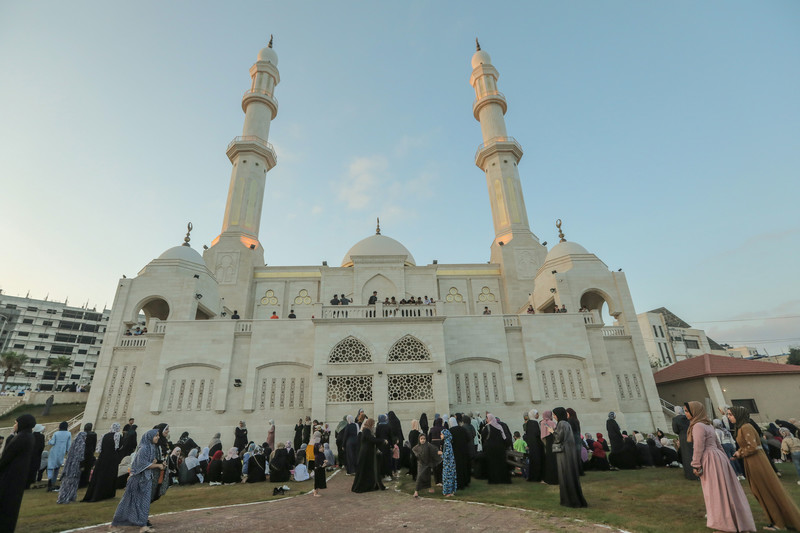