ROME: Distant and blurred, as if it belongs to the past, the war in Afghanistan has never been so fierce and forgotten. On the 7th of October, the country entered the twentieth year since the United States announced the first airstrikes against the Taliban, adding a new chapter to the endless bleeding of this corner of Asia, where more than four decades without peace have left entire generations hopeless.

‘I believe that the [Afghan] people do not remember why we started this war.’

The voice of Giorgia Novello, medical coordinator of the NGO Emergency in Kabul, bursts onto the screen of the theatre where the documentary A hospital in war – Emergency in Afghanistan was premiered last week in Rome. Filmed and produced by Nico Piro, special correspondent of the Italian Rai 3, it is one of the few recently released first-hand reports on the Afghan war. It recounts both the spiral of violence in which the country is still trapped and the tireless efforts of those trying to ease the pain of a jaded population.

International media attention withdrew from Afghanistan with the US and NATO troops in 2014, dooming to oblivion an already underreported conflict, where, in 2019, civilian casualties have reached an unprecedented level.

Hidden victims of an invisible war, civilians are paying the highest price: injured while playing, driving, going to school, providing livelihoods to their families; wounded by bullets, and landmines; victims of explosions and airstrikes.

‘The biggest lie ever told about contemporary wars is that they are fought by armies on battlefields. Indeed, they are fought among people in the middle of villages and in the hearts of cities. That lie pushes people to think that conflicts, being a matter of warriors and soldiers, leaves only them killed and injured, not civilians, which are instead the main victims’, Piro told us at the sidelines of the premiere in Italy. 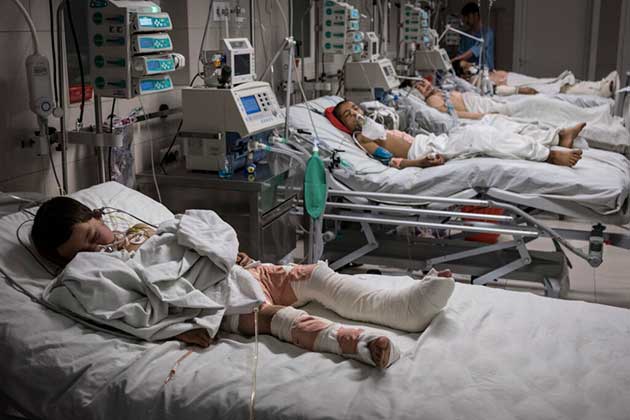 Three young male patients are seen in the ICU after surgery. All the boys were injured in a mine blast. October 1st 2017, Emergency Surgical Center for War Victims in Kabul, Afghanistan. Credit: Mathieu Willcocks for Emergency

The Italian NGO Emergency has operated in Afghanistan since 1999. It runs two hospitals for war victims in Kabul and Lashkar Gah, a network of first aid posts in eleven provinces and a medical-surgical centre in Panjshir. Over the past few years, notably from 2017, the number of patients receiving care at its health facilities has significantly and consistently increased.

‘The majority come from the provinces, but they also come from Kabul where explosions are extremely frequent’, Marco Puntin, Emergency’s program coordinator in Afghanistan, reached in the Afghan capital, told us. Fifteen percent of those treated are women and thirty percent are children. The large majority of the patients, many of which civilians, are treated for bullet injuries — 55 percent — or for wounds caused by foreign bodies — 30 percent.

‘The security situation has deteriorated, especially in [the capital]. Our local staff do not leave home at night, travelling after dark is dangerous. If they can, they avoid running that risk. The same for us, internationals’, Puntin said.

Fighting continues in all the provinces, too. Fifteen percent of the patientes admitted at Emergency hospital in Panjshir – the safest place in Afghanistan – are still victims of war coming from neighbouring areas.

After the agreement signed in February between the United States and the Taliban, something has changed. ‘We noticed a reduction in large-scale attacks, but a severe surge in small explosions’, he said. ‘In Kabul, even if small, there are explosions every single day, no day excluded’.

In September, a new spike of violence throughout the country marked the stalling negotiations between the Afghan government and the Taliban. Since Sunday, a Taliban military offensive against Afghan security forces has been underway in the Helmand province. Yesterday Emergency’s Surgical Centre for War Victims in Lashkar-Gah received forty-eight patients with war injuries, four of whom had already died upon arrival. “This morning, a rocket flew into the city, and we immediately received six patients due to the explosion. Today, we have received one person who was dead on arrival and another eleven seriously injured patients have been hospitalised. Six have already been treated and discharged,” Puntin said in a note to the press.

“Whilst in Doha there is talk of peace, the violence here in Afghanistan doesn’t stop. Civilians are already paying the price for this new wave of fighting in Helmand, ” Puntin added.

Finghtings are raging while COVID-19 outbreak continues to challenge the fragile national healthcare system. Between May and June, the spread of the virus forced some hospitals to shut down: ‘That stressed a health system already brought to its knees by forty years of conflict’, Puntin said. Cases are on the rise again, especially along the border with Iran.

Emergency is implementing preventive measures in all its facilities, which include the use of personal protection equipment, the reduction of bed capacity to ensure adequate space between beds and specific protocols to minimise the risk of virus transmission.

However, the pandemic was not perceived as a major threat by the Afghan people: ‘Most of them didn’t believe in COVID very much because they have a greater problem: the war. Their priority is to stay alive in the areas where they live, hit more by war than by coronavirus’, he explained.

Staying alive, surviving. And to survive, ‘the only thing to do is not to think . . . You have to try to live normally if you want to preserve your mental health’, Puntin said.

But Afghans know that every day can be their last.

‘Recently, a friend in Kabul, a well-educated young man, who has a good job and a healthy family, told me something which I hold dear. “When I leave home in the morning, I kiss my kids many and many times because it can be the last time I see them.” This describes very well what living in Afghanistan means today’, Piro told us.

Life has changed dramatically since the end of the Isaf mission, according to Piro, who has been covering the conflict since 2006. ‘Conflict-related violence has increased, and criminality is on the rise with robbery and kidnapping on a daily basis’, he said.

Nonetheless, it is not just a matter of violence and criminality.

‘After 2001, people really believed in a new and greater Afghanistan, a new phase of peace and prosperity. Now they are completely hopeless waiting for the worst yet to come’, he added.

Fragile signs of hope are seen in the response of the people: ‘From what we see, from our patients and from our local staff, there aren’t many positive elements. I saw a few. The positive thing is that since a couple of years, rallies for peace are proliferating. People can’t stand it anymore. Forty years of constant war: They can’t stand it anymore’, Puntin stressed.

Peace would not only mean ceasing the Afghan people’s suffering, it could also impact well beyond the country’s borders — according to Piro — stopping opium, heroin and methamphetamine production; weakening the Islamists movements in the bordering ex-soviet republics; halting migrations; downsizing Pakistan’s power in the area and so its impact on the Kashmir tensions, possibly bringing stability and prosperity to that entire sector of Asia.

‘Peace is closer than ever’, Piro said. However, the Italian journalist believes that the Afghan people are not giving peace a chance: allowing the Taliban to return to power could mean a peace ‘potentially worse than war’ for many Afghans, forcing ‘the best part of the country — people who fought for and built freedom of press, women’s right, civil and human rights, democracy’ — to flee the country to avoid retaliation.

In 2018, when the documentary, which will be realised in English, was filmed, Piro was almost the only foreign journalist in Afghanistan during the Parliamentary elections. ‘Since 2014, Afghanistan has been forgotten by the international media. Why? Security, the rising Syria topic, budget cuts and so on. All of those reasons are true, but we have to admit that the media made a big mistake because in leaving Afghanistan behind, we, as reporters, did what the politicians wanted us to do. Forgetting Afghanistan meant giving impunity to politicians and their decision to begin and expand an impossible war’, he said.

In silence, hope is fading as in silence Afghans continue to die.

“In this country, divided on everything … just death seems left to unify everyone ’. The voice from the screen chills the audience, dazed by realizing that the conflict in Afghanistan has never come to an end.