Despite the Hiatus, Biden's Love Affair with Israel Will Continue

With Donald Trump still disputing his loss of the US presidential election, there has been a lot of attention to which foreign leaders congratulated the winners after the race was called on Saturday.

Israeli Prime Minister Benjamin Netanyahu took his time, waiting until well after other world leaders had recognized Joe Biden and Kamala Harris as the victors.

But finally, on Sunday, Netanyahu joined the club.

“Joe, we’ve had a long and warm personal relationship for nearly 40 years, and I know you as a great friend of Israel,” Netanyahu wrote in a tweet addressing President-elect Biden and Vice President-elect Harris.

“I look forward to working with both of you to further strengthen the special alliance between the US and Israel.” 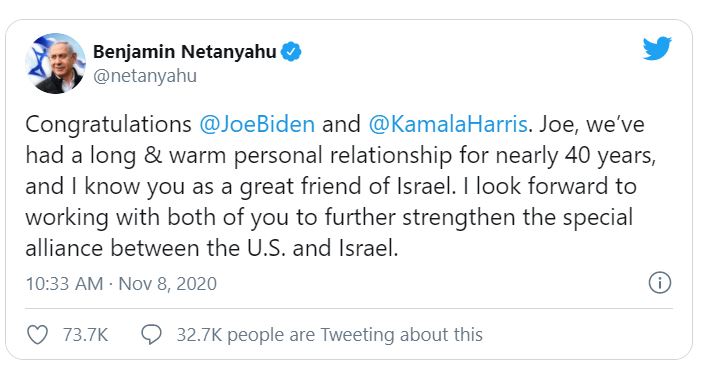 It was undoubtedly another awkward moment for Netanyahu, whose close identification with Trump’s ultra-nationalist, white supremacist populism has been a hallmark of the last few years.

But Netanyahu is right about Biden’s unconditional, career-long commitment to Israel.

Back in 1986, Biden told the Senate that Israel is “the best $3 billion investment we make.”

“Were there not an Israel, the United States of America would have to invent an Israel to protect our interests in the region,” Biden asserted.

It’s a theme he returns to time and again.

“Israel is the single greatest strength America has in the Middle East,” Biden told an interviewer in 2007.

Biden’s love for Israel has survived everything that has been thrown at it. This includes the public humiliation Netanyahu’s government inflicted on Biden in 2010, when he was vice president.

Israel apparently timed the announcement of a new colony in occupied East Jerusalem specifically to embarrass Biden, who was visiting Israel in an effort to advance the Obama administration’s “peace” efforts.

Obama had been urging Israel to pause settlement construction to give the initiative a chance.

Yet the lovers’ quarrel was quickly forgotten.

Israel went on to build almost as many settlement homes on occupied Palestinian land during the Obama years as it did during the George W. Bush administration.

Not only that, but as Israel killed an average of 11 children per day during its summer 2014 assault on Gaza, the Obama-Biden administration resupplied Israel with munitions.

True friends don’t let friends run out of missiles when they are bombing an impoverished, defenseless refugee population caged in a ghetto.

During its 51-day assault, Israel killed more than 2,200 Palestinians.

The Obama-Biden administration sprung into action to thwart Palestinians from seeking justice for Israeli war crimes at the International Criminal Court.

Anyone hoping for something different this time around should prepare for quick disappointment.

Biden has already endorsed some of Trump’s signature pro-Israel policies.

He has welcomed the normalization deals the Trump administration brokered between Israel and the United Arab Emirates and Bahrain.

Biden has pledged not to move the US embassy from Jerusalem back to Tel Aviv. 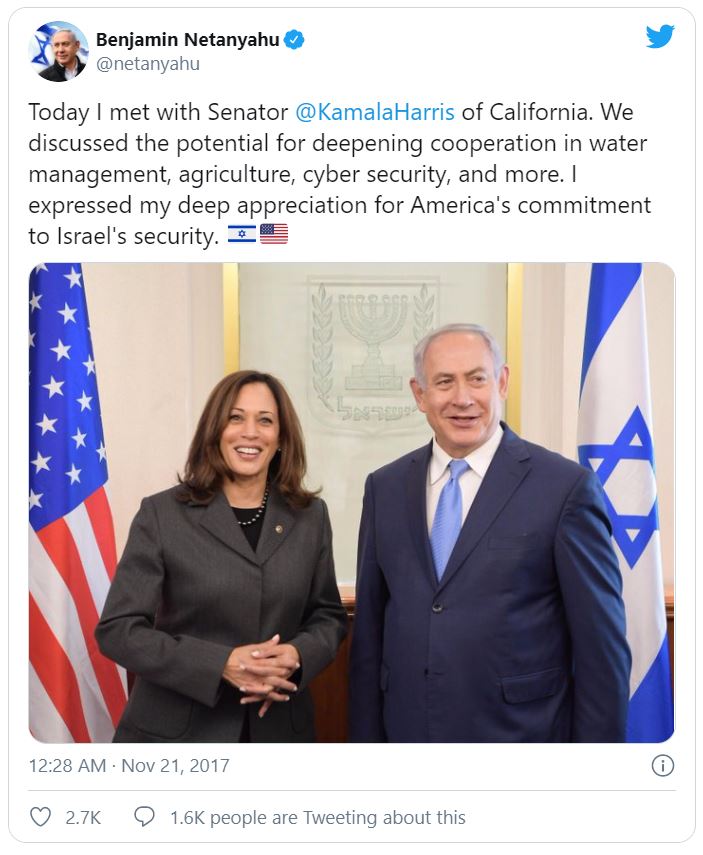 Harris also has her own long history of support for Israel.

Yet there is a slight shift in tone.

In a pre-election interview, Kamala Harris pledged that the Biden administration would restore humanitarian aid for Palestinians cut by Trump, and re-open the US consulate in East Jerusalem.

Restoring aid to East Jerusalem’s hospitals or the refugee agency UNRWA would be welcome – to the extent that it actually helps Palestinians in need.

But at best it would mark a return to a status quo where Palestinians are kept on life support while Israel continues to aggressively steal their land and violate their rights with impunity.

“Joe and I also believe in the worth and value of every Palestinian and every Israeli, and we will work to ensure that Palestinians and Israelis enjoy equal measures of freedom, security, prosperity and democracy,” Harris said.

“We are committed to a two-state solution, and we will oppose any unilateral steps that undermine that goal. We will also oppose annexation and settlement expansion,” she added.

Leaving aside that the two-state solution is dead and buried, there’s no reason to take even these minimal commitments at face value.

Democrats always say they oppose settlements and want to see a two-state solution, but as eight years of the Obama-Biden administration demonstrated, that never translates into action.

In his 2018 memoir, Ben Rhodes, deputy national security adviser under the Obama-Biden administration, staunchly defends his boss against accusations that he was too supportive of Palestinians.

Rhodes writes that the critics who accused Obama of being not sufficiently pro-Israel “ignored the fact that he [Obama] wasn’t doing anything tangible for the Palestinians.”

Indeed, one of the Obama-Biden administration’s final acts was to reward Israel’s settlement spree and massacres with the biggest military aid package in history – a minimum of $38 billion over 10 years.

Now, according to The Jerusalem Post, “Israel plans to reach out to US President-elect Joe Biden’s administration in the coming months to begin discussing the formulation of a new long-term military aid plan.”

“We will want to talk about a new package and program,” a senior Israeli official told the newspaper. “The new plan will need to take into account the changing threats and challenges we face in the Middle East.”

In other words, Israel plans to increase its demands on US taxpayers. 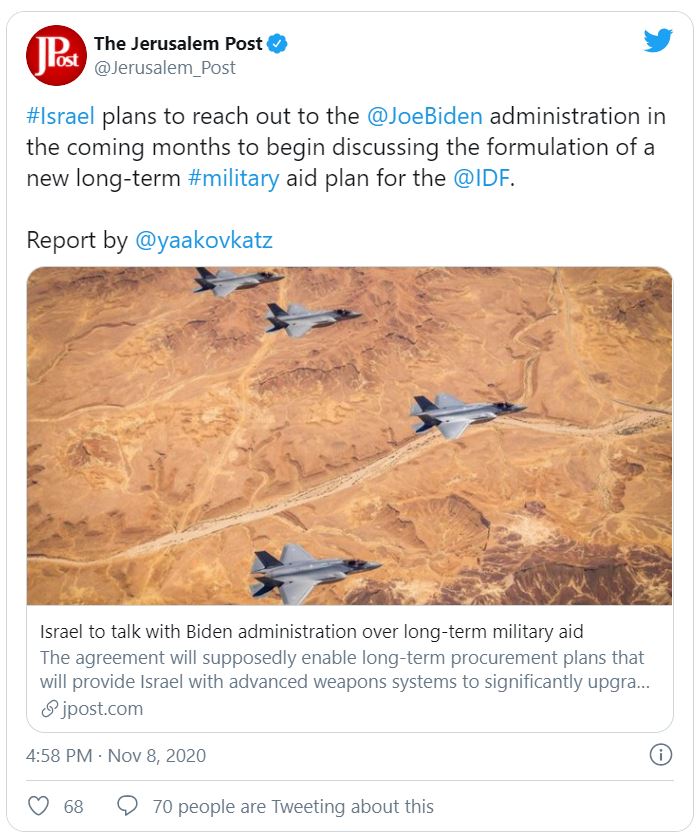 Whenever a new administration comes in, there is a flurry of speculation and misplaced optimism about who it will appoint and what it will do to revive the “peace process.”

No one should be distracted by these parlor games.

Netanyahu’s words of welcome for Biden are sincere, because he knows the incoming American president will do all he can to deliver for Israel, just like every Democrat and every Republican before him.