COLOMBO: With Sri Lanka drifting towards China to get funds for infrastructural development, India is anxious to demonstrate that it also can contribute to Sri Lanka’s economic development. This came out clearly in the statement made by the Indian Foreign Minister Dr.S.Jaishankar to the media here on Wednesday after he met Lankan President Gotabaya Rajapaksa.

The media statement touched upon a wide range of issues but it was predominantly about possibilities in economic cooperation. Jaishankar said that he would be meeting the Sri Lankan business community.

“To all of them, I carry the message of an India that will always be a dependable partner and reliable friend, open to strengthening its relationship with Sri Lanka on the basis of mutual trust, mutual interest, mutual respect and mutual sensitivity,” he said.

“As two close neighbors with such obvious synergies, the potential for further strengthening our cooperation is enormous. Some of that may help provide immediate relief; others would have very positive medium-term implications for Sri Lanka’s development. There are many proposals under discussion, including in infrastructure, energy, connectivity, etc. Their early implementation is obviously in mutual interest and would definitely accelerate Sri Lanka’s economic recovery,” he added.

On private Indian investment, Jaishankar said: “Let me stress that Indian business is strongly interested in investing in Sri Lanka. We have discussed some important opportunities including in special zones for pharmaceutical manufacturing as also in tourism. I will ensure an early follow-up.”

“India has a solid record as a development partner of Sri Lanka in the social, community and human resources sectors. Whether it is in mass housing or ambulance services, heritage conservation or education, our partnerships have made a real difference to the lives of the people all over the island. Our Lines of Credit have re-built connectivity, facilitating the restoration of normalcy. We are cognizant of the domestic priorities of the Sri Lankan Government, including in agriculture and technology, education and skill development and urban development.”

“In particular, we understand the importance H.E. President Gotabaya Rajapaksa and the Government of Sri Lanka attach to the establishment of vocational training centres. We will naturally be guided by these priorities in our future endeavors,” Jaishankar said.

The Indian Foreign Minister did not directly mention the controversial Colombo Port Eastern Container Terminal (ECT) in which India wants to invest along with Japan. But he did say that it would help Sri Lanka’s economic recovery if agreed developmental projects were implemented.

The Lankan government had initially offered to hand over the construction and running of the ECT to India and Japan but subsequently put it on the backburner because of opposition from anti-India and ultra-nationalist elements. India is anxious to have a foothold in the Colombo harbor as 70% of the port’s business is Indian transshipment. Additionally, a Chinese company is running a terminal there – the Colombo International Container Terminal (CICT).

Jaishankar said that Sri Lanka has agreed to take an India-made COVID 19 vaccine. “Reflecting our Neighborhood First policy, India has supported Sri Lanka’s efforts to tackle COVID through timely medical assistance.We are now looking at post-Covid cooperation and I carry back with me Sri Lanka’s interest in accessing vaccines from India.”

Anxious to be relevant for Sri Lanka’s security, given the advent of Chinese power in the Indian Ocean, Jaishankar said: “As maritime countries in the Indian Ocean, India and Sri Lanka have a shared interest in ensuring maritime security and safety. We have a long history of cooperation in this regard. India has been the first responder in emergency situations. I am confident that this domain of cooperation will continue to expand in the days ahead. We stand ready to enhance Sri Lanka’s capabilities to meet growing maritime and security challenges.”

Jaishankar sounded Lankan leaders on India’s sensitivities about moves to scrap the 13 th.Amendment of the Lankan constitution which gives a modicum of powers to the Tamils to govern themselves in the North and the East were they live in large numbers.

Jaishankar told Sri Lanka that it would be in its own interest to promote reconciliation with the Tamil minority and ensure them “justice equality, peace and dignity within a united Sri Lanka”. He reminded Sri Lanka about its own commitment to the devolution of power to the provinces under the 13 th.Amendment.

Significantly ,the 13 th. Amendment flows from the India-Sri Lanka Accord of 1987, which gives India legitimacy to speak on the ethnic issue.

Gunawardena also sought cooperation in the vocational education and the development of the Blue Economy. He also stressed the importance of stopping illegal fishing in an oblique reference to Indian fishermen illegally fishing in Sri Lankan waters in the Palk Strait and Palk Bay. Gunawardena expressed Sri Lanka’s interest in ensuring maritime security in the Indian Ocean.

The Lankan Foreign Minister thanked India for giving US$ 15 million for promoting Buddhist sites in Sri Lanka and India and LKR. 1.2 billion (US$ 6.3 million) for the development of the Jaffna Cultural Center. 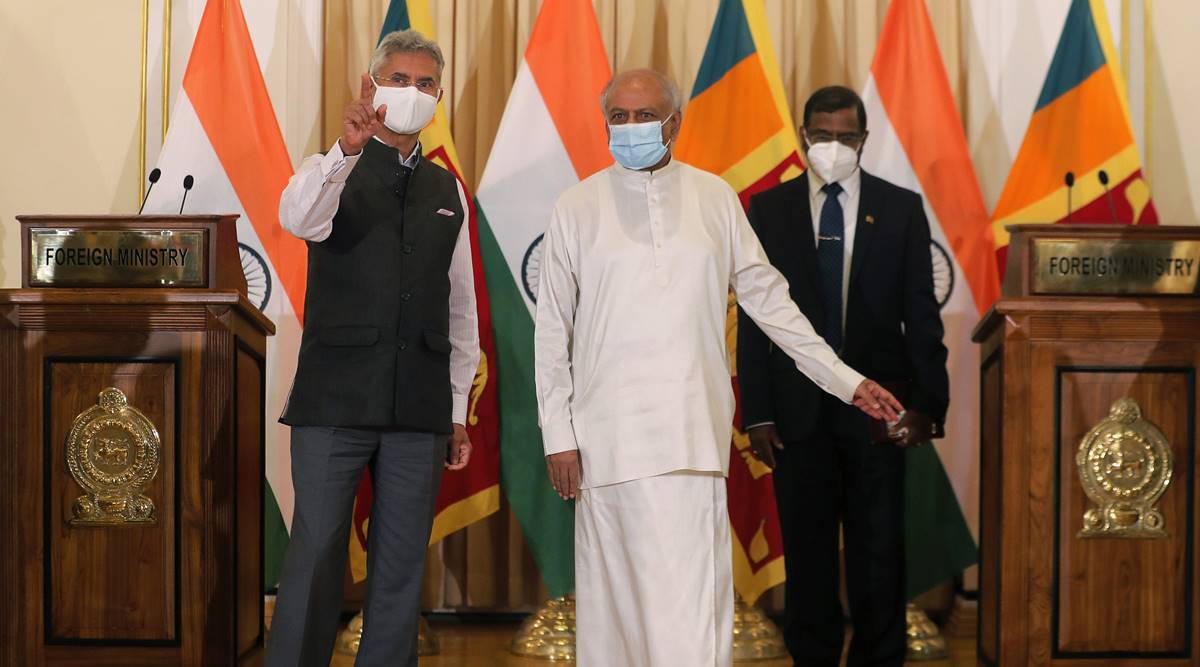