President Joe Biden spoke about the dire need for unity, tolerance, and respect

America is known as the world’s first democracy and as a country where different ethnicities coalesce to constitute the quintessential “American”. But closer scrutiny would reveal that, from the beginning to the present day, its history has been pockmarked by disunity, violence, racial discrimination, economic inequality, and even secessionist tendencies.

What happened on January 6, when White racist hoodlums, exhorted by the then President Donald Trump, stormed into Capitol with some even intending to kill the Vice President and House Speaker, was only the latest incident of intolerance and lawlessness in the history of the US.

It is in this context that President Joe Biden spoke on Wednesday extensively, emphatically and movingly, about the dire need for unity, tolerance, and respect across ethnicities among Americans.

“I know speaking of unity can sound to some like a foolish fantasy. I know the forces that divide us are deep and they are real. But I also know they are not new. Our history has been a constant struggle between the American ideal that we are all created equal and the harsh, ugly reality that racism, nativism, fear, and demonization have long torn us apart. The battle is perennial. Victory is never assured,” the 78 year old Biden said in his inaugural address.

Writing in Defense One on February 29, 2018, Peter W. Singer pointed out that over the previous ten years, individuals and groups fueled by Right Wing extremism had committed 71% of the known politically or religiously-inspired killings in the US. That is, 274 of the 387 Americans murdered by extremists.

Some recent cases are; the murder of 17 school children and teachers in Florida in February 2018, and the mass shootings that had happened in various parts of the US. Hundreds of had been killed by these groups in the past decades. Such killings were a “clear, present, and proven” danger to the United States, yet Americans find it awkward to talk about them, Singer observed. He pointed out that people tended to resort to “what-aboutism” to play down the Right Wing and racist violence, though Left wing and Islamic groups accounted for only 3% and 26% of the violence respectively, according to official US data.

In his book: Break It Up: Secession, Division, and the Secret History of America’s Imperfect Union, Richard Kreitner argues that the US’ foundations have always been fragile, a word used by President Biden to describe American democracy in his inaugural speech. The threat of disunion has been raised in every region and by all political factions at some point in the country’s past, Kreitner contends

As recently as 2020, in some Republican-ruled States, there were voices demanding secession from the Union when it became clear that Trump was on a losing wicket, having lost the support of the Blacks and other disadvantaged groups including the White poor. As part of the campaign to nullify the voting in the election unleashed by the White power elite, a Texas lawmaker announced planned to introduce a referendum on secession from the US. Republican lawmaker Kyle Biedermann said in a statement: "The federal government is out of control and does not represent the values of Texans. That is why I am committing to file legislation this session that will allow a referendum to give Texans a vote for the State of Texas to reassert its status as an independent nation.” Separatists even conducted a poll to show that Texas was keen to secede. A poll showed that 26% of Texans supported State independence.

In 2016, activists in Portland, Oregon, submitted a petition calling for a statewide vote on secession. In a 2018 survey, 31% of Americans believed a civil war was possible within the next five years. A group of national security experts put the chances of a civil war within the next 15 years at 35%.

The 13 colonies that eventually formed the United States of America shared no common identity or purpose before the revolution, according to Kreitner. He recalls how, in 1754, Benjamin Franklin bemoaned that while craving for a Union, the colonies were distracted by differences among themselves. Franklin admired the way the American Indian tribe, the Iroquois, maintained unity and wondered why White colonists could not unite when “savages” could.

According to Kreitner, it was the fear of foreign intervention which united Americans more than “patriotism” per se. David Hendrickson of Colorado College, points out that the US Constitution was not an embodiment of a “shared national identity” as propagated officially, but was meant to prevent foreign powers from retaking the newly independent US States. Krietner argues that the Continental Congress, formed in 1774, was a “spontaneous response to an emergency,” and not a genuine desire for American unity.

Even in the “War of Independence” South Carolina and Virginia opposed the boycott of British goods which was favored by New Englanders. In 1777, colonists of New York established an independent “Republic of Vermont” and wanted to join the British province of Quebec. This move led the Union’s founders to refuse Vermont’s entry into the Union up until 1791.

During the War of 1812, the six New England states wanted to discuss secession as they were opposed to the war with Britain. But the Southern States “craved for war” with Britain because Britain curbed the slaveholders’ economic interests, Kreiten points out.

In 1842, William Lloyd Garrison called for a “REPEAL OF THE UNION between the North and the South,” as he saw the US Constitution as a “proslavery” document. Not long afterwards, slavery led to the Civil War which left 624,000 Americans dead. Slavery ended in the 1860s, but the color bar remained a feature of America till the 1960s. Racial discrimination, which appears to be ingrained, recently found expression in the killing of a Black man George Floyd in Minneapolis. It triggered the massive ‘Black Lives Matter’ movement which shook America to its very foundations.

However, though calls for secession were ubiquitous before the Civil War, most of them were merely rhetorical says Eric Herschthal of the University of Utah in his article in The New Republic. Popular support for secession was limited, he asserts. American States sometimes used the threat of secession to get their demands met. In 1879, a group of California lawmakers claimed the “right to secede” if the federal government did not ban Chinese immigration. That forced Congress to pass the Chinese Exclusion Act of 1882, America’s first race-based anti-immigration law. A mere threat to secede had worked.

Eventually, separatist sentiments found an outlet in political lobbying in the mainstream democratic institutions, including the major political parties. And as Herschthal points out, there was a realization that no separatist movement would withstand the force of national unity as represented by the Union government “a behemoth created over decades by both the Republican and Democratic governments.”

The ultimate power of the US State apparatus to ensure peace and order was demonstrated on Wednesday when it ensured that the inauguration of President Biden, who is White, and of his Vice President Kamala Harris, who in non-White, went off in a peaceful atmosphere. 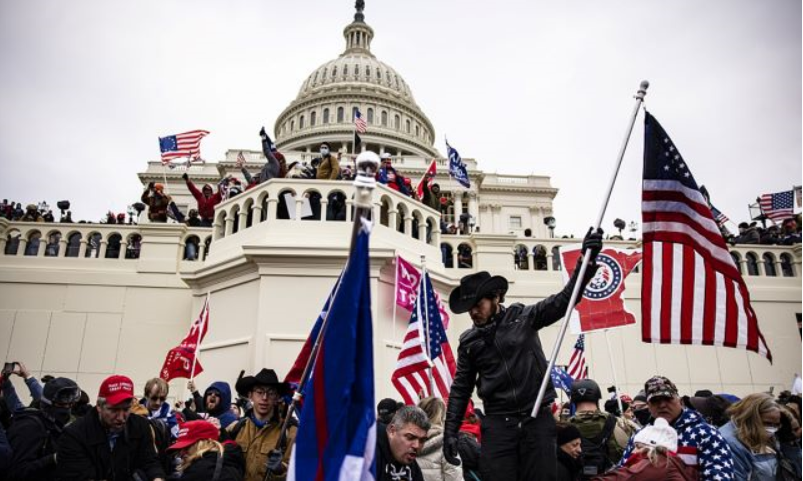