No laughing matter in Colombo

COLOMBO: Tripura Chief Minister Biplap Kumar Deb has claimed that Indian Home Minister Amit Shah had once revealed to him that the BJP has a plan to form governments in neighboring Nepal and Sri Lanka.

This may be laughed off in India as another of those baseless utterances by Deb who has earned an unsavory reputation of being a loud mouth. But in Sri Lanka it has caused considerable concern.

Reporters in Colombo have been desperately trying to confirm if Deb had really said what he has been quoted as saying, and whether the BJP, which rules India, really has a plan to install BJP regimes in Sri Lanka and Nepal. They have been searching for phone numbers of BJP leaders in Tamil Nadu and New Delhi to cross check this claim.

Unfortunately for India, the story on Deb’s utterance, has come at a time when relations between Sri Lanka and India have soured a bit after the Gotabaya Rajapaksa government backed out of a May 2019 agreement to give the project to develop the strategic East Container Terminal in Colombo port to India.

The Lankan government had also given three power generation projects in the islands of Jaffna to a Chinese company rejecting an Indian company’s tender. The latter decision was cancelled after India lodged a strong protest citing security concerns.

Lankans anxiously ask if India will become unfriendly to Colombo and take the Western countries’ side in the March session of the UN Human Rights Council where a hard-hitting resolution against the Sri Lankan government alleging war crimes is expected to be taken up.

The fact that India is yet to accept the Lankan government’s offer of a contract to build and operate the West Container Terminal in Colombo port in lieu of the East Terminal, is worrying friends as well as opponents of India in Sri Lanka.

The fact that India has been able to thwart the Sri Lankan government’s move to give a contract to build three power plants in the islands of Jaffna to China is seen by Sri Lankans as a demonstration of India’s superior clout in the region which has implications for Sri Lanka.

However, few in Sri Lanka know that Tripura Chief Minister Biplab Kumar Deb is not taken that seriously even by his own party in India. He had to be pulled up by the BJP top brass for his thoughtless and embarrassing remarks on a variety of matters.

Reacting to Deb’s contention that Amit Shah had told him that the BJP will establish its rule in Sri Lanka and Nepal, Marxist Communist leader and former MP, Jitendra Chaudhury, said that Deb has no regard for the constitution or democracy. Chaudhury accused Amit Shah of engaging in a “ conspiracy against Nepal,” He demanded an answer from Prime Minister Narendra Modi.

Tapas Dey, Tripura State Congress party Vice-President, described Deb’s remark as “imperialistic”. He said: “It is unfortunate that the Chief Minister of Tripura is supportive of imperialism. Both Sri Lanka and Nepal are sovereign countries, and we cannot interfere or do anything about their internal affairs.” Dey also sought action against Deb for his “anti-national” statements.

In the past, Deb had made hilarious remarks with dead seriousness. He asked families to rear ducks because “when ducks swim in water, the oxygen level automatically increases in the water body”. He announced that the government would distribute 50,000 ducklings to villagers whose homes are near water bodies.

Glorifying ancient India’s achievements in science and technology Deb said: "India has been using internet for ages. In Mahabharata, Sanjaya was blind, but he narrated what was happening in the battlefield to Dhritarashtra anyway. This was due to the existence of the internet. Satellites also existed in that period."

Once he shocked civil servants at a civil service function when he said that only civil engineers are suited for the civil services. “Civil engineers should join the Civil Services because they have the knowledge and experience to help build a proper administration and society."

He then made a sexist comment about Indian model Diana Hayden who won the Miss World title in 1997. “She is not worthy of the Miss World crown. We see women as goddess Laxmi and Saraswati. Aishwarya Rai represents Indian women. She became Miss World in 1997 and that's all right. But I do not understand the beauty of Diana Hayden," Deb said as the audience squirmed. After protests from feminists, he apologized.

Deb then advised Tripura’s youth not to hanker for government jobs but to rear a cow or open a paan (betel leaf) shop. "The youth here run after political parties to get a government job and waste precious time instead of using it to become entrepreneurs. If they had set up paan shops each one would have accumulated a bank balance of Rs 5 lakhs," he said.

Since his utterances were often not a laughing matter, he was summoned to the BJP headquarters in Delhi and castigated. 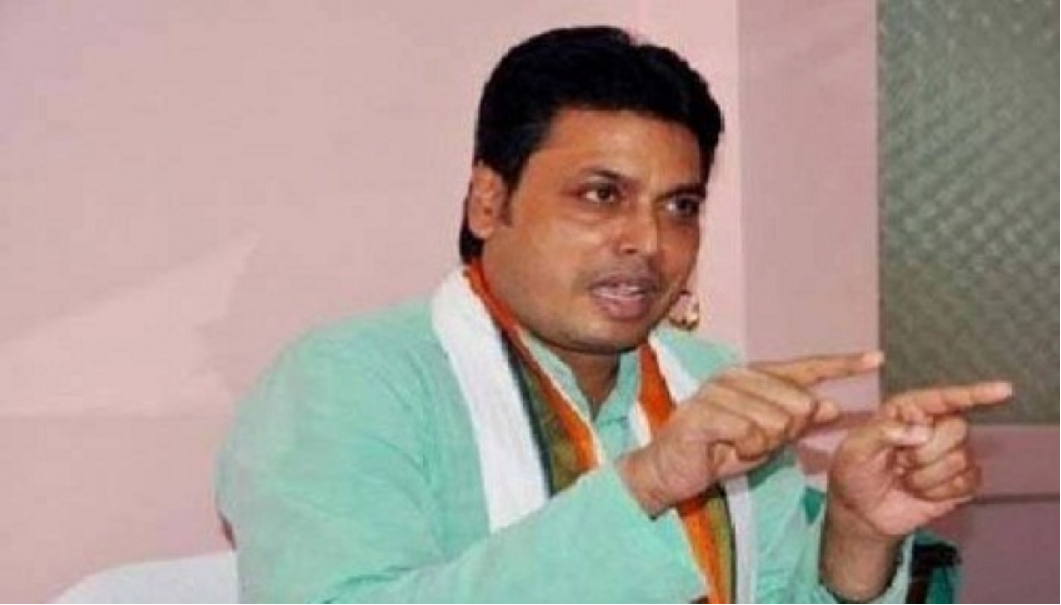