BANGKOK: Myanmar’s top generals have begun the process to prevent Aung San Suu Kyi – the country’s popular civilian leader – from ever holding political power. Both she and president Win Myint were arraigned in a closed-door court session via video link Tuesday, Feb. 16. This is the beginning of a trial that is expected to take about six months to conclude. If convicted, it will prevent Suu Kyi from standing in future elections.

Suu Kyi is charged with violating import restrictions after walkie-talkies and other foreign equipment that were found in her villa compound. They were discovered during a search of her premises on Feb. 1, the day the military launched a coup, seizing all judicial, executive and legislative power, placing it in the hands of the commander-in-chief Senior General Min Aung Hlaing.

The Nobel laureate has also been charged with contravening a natural disaster management law by interacting with a crowd at an election rally during the coronavirus pandemic. A charge that was added after her original arrest and only publicly disclosed at her hearing. Win Myint is charged with breaking COVID-19 restrictions. They reportedly appeared without legal representation.

The coup leaders have promised elections sometime next year after the state of emergency they have imposed is lifted. The authorities are still investigating more serious accusations related to receiving foreign funds – which could amount to charges of treason.

The military commanders also seem intent on preparing a case against her party – the National League for Democracy (NLD) — in order to ban it from politics and declare it an illegal organisation. The NLD, which overwhelmingly won last November’s poll, remains a thorn in the military’s side as for the past three weeks protestors have hit the street in their hundreds of thousands, to defend democracy and reject the coup.

“The civil disobedience movement is a nonviolent campaign which was started by young doctors across the country: it was a spontaneous grassroots response to the coup,” Thinzar Shunlei Yi, a prominent activist involved with the protest in Yangon, told IPS. “It has grown daily as the civil servants have inspired others to defend our democracy,” she added.

The protestors remain defiant in the face of the security forces tightening the screw. They are facing daily intimidation, threats and harassment at the hands of the police and soldiers strategically station to discourage and disperse the protests. But troops, tanks and water cannons have not deterred the protests, which are growing daily. But the strength of the movement is that it encompasses all generations, all walks of life, civil servant and workers. All of whom support democracy, though a large proportion also support the NLD.

Meanwhile, the military are clearly on a mission to overhaul and restructure the country’s fledgling democracy, turning the clock back to the dark days of direct military rule.

For the past three weeks the new junta has rolled out a new administration: from national, provisional to district and wards. Removing the previous elected incumbents and putting in people close to the military.

The Supreme Court has been transformed, with the previous NLD appointments routed out and replaced with judges loyal to their military masters. The Union Election Commission has also been dismissed and swapped with military loyalists. Key ministries have also been targeted and military officers and personnel infiltrated, often at the highest level. This was the common practice during the previous military regime. But the public service has been largely transformed in the last ten years with comprehensive public reform.

“The militarisation of the bureaucracy is under way again I fear,” a former diplomat told IPS on condition of anonymity. “In the past it destroyed civil servant moral, civil service efficiency and expertise, and made the bureaucracy another arm of the military — stripped of initiative and think independently – making it powerless to do anything else but follow orders and recreating a truly authoritarian state.”

But the military junta has also dealt a death blow to developing democratic ideals and practices, with the worst being the wholesale changes in the laws and new edicts. Activists and human rights groups in Myanmar have condemned these measures as unacceptable and a gross erosion of basic civil and human rights, especially the changes to citizens protection and security laws.

These include prisoner’s right to a lawyer – Suu Kyi has been denied access to her lawyer since she was detained at the beginning of February.

It also includes the right to detain prisoners for an unlimited the right to arrest people without a warrant and search homes unimpeded by local administrators, carry out surveillance unconstrained, intercept any form of communications, and ask for users’ information from operators.

The government has also enacted a draconian Cyber Law which essentially allows them full access to digital information and all social media – with the right to prosecute anyone they deem has crossed the line.

“The changes in the laws amount to the removal of all rights of freedom of speech, association and liberty as well as the rights associated the rule of law and fair trial,” Stephen McNamara, a UK lawyer who has worked with lawyers in Myanmar since 2007, told IPS.

“These changes in the basic laws of Myanmar are wider than any amendments since the nineteenth century. It reflects a military that intends to stay in power for a very long time,” he told IPS.

The fact that the military launched the coup when it could not get its own way clearly reflects the army’s mentality and priorities. They could not accept the NLD’s crushing victory in the elections – and the second time in five years.

They were shocked by the extent of their electoral triumph victory and had been counting on being able to form some sort of coalition government with various parties, including their pro-military partners, ethnic political parties and even the NLD if they did not have an overwhelming victory.

The military foresee a political future where the army is an integral part of the political setup — integrated into the power structure and administration much like the way they see Thailand. In fact the Commander in Chief is very fond of what he sees as the model – an important role for the army, where their economic interests are protected, a self sufficient economy and ‘democratic’ outlook – which resists leftist, socialist or communist leanings. It is a concept of pluralist democracy with no interest group having the dominant role or power.

Of course the coup leaders also see former Senior General Than Shwe’s ‘roadmap to democracy’ — developed in 2003 by the then intelligence chief and prime minister — as the model to be followed. This projected the final stage before a more liberal form of democracy as a coalition government of national unity. But always the emphasis was on a ‘guided democracy’. So while they are trying to turn back the clock to when the first elections were held – they have in fact wound it back into the dark ages.

“The soldiers, police and their hired thugs come out at night and wage a war of terror against the people – targeting prominent leaders of the protest movement – and conducting their campaign of intimidation, harassment and arrests,” Nyein Chan Aung told IPS.

“But this is different from 1988, and the new generational tactics have armed the protestors with weapons that will help defeat the military in the long run. With mobile phones, the internet and social media the civil disobedience movement has a voice that’s being heard across the world. The military’s tactics are doomed to fail this time round.”

Suu Kyi’s trial is expected to proceed on Mar. 1.

Cover Photograph: Protesters demand the release of civilian leader Aung San Suu Kyi. The protestors remain defiant in the face of the security forces tightening the screw. They are facing daily intimidation, threats and harassment at the hands of the police and soldiers strategically station to discourage and disperse the protests. CC BY-SA 4.0 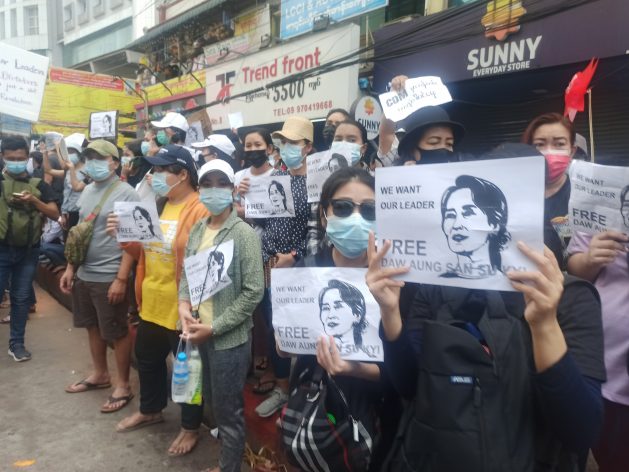