Libya - Will The Future Be Stable?

Libya got a new interim Government of National Unity (GNU) in the third week of March 2021 and a new three member Presidential Council as part of an arrangement brokered by the United Nations with the mandate to hold democratic elections by December 2021.

The new entities would replace the two power centres of the UN endorsed internationally recognized Government of National Accord of PM Fayez al-Sarraj in Tripoli and the rival power centre of General Khalifa Haftar’s Libyan National Army entrenched in the Cyrenaica region and not recognised by the international community.

The shift was formalized in Libya’s second city of Benghazi, the seat of the eastern administration. The handover came a week after GNA head Fayez al-Sarraj formally ceded power to the new unity administration.

Since 2011 following the ouster and death of Muammar Gadaffi there had been chaos in Libya with the two rivals were backed by different foreign powers. They had engaged in a civil war since 2015 that left thousands dead; institutions destroyed and a once oil rich economy in distress.

The GNA had been backed by Turkey and Qatar while Haftar had the backing of Egypt, Russia, France and the United Arab Emirates (UAE). Regional and international powers as well as the UN had tried over the years to bring the two sides to the negotiating table; to get a ceasefire in place; and to end a war that was destroying not just the country but threatened to destabilse the region.

Their efforts had failed and till August 2020 it appeared that Haftar would not back down from his objective of taking Tripoli and bringing the whole country under his control. But his forces were held by a reinforced GNA outside Sirte and the effort to take Tripoli had been stalled after 14 months of fighting possibly creating an atmosphere conducive to a ceasefire which the two sides agreed to in October 2020.

Military officers from the two rivals had agreed on practical steps towards implementing a ceasefire agreement on Nov. 3, after meeting in the town of Ghadames. A military sub-committee was formed to ensure that the military forces returned to their headquarters and foreign elements withdrew from military contact lines. A joint military commission consisting of five senior military officers from the United Nations-recognised Government of National Accord (GNA) in Tripoli and five from Haftar’s Libyan National Army (LNA) was set up to guarantee the safety of the participants.

Meeting in Geneva in February 2021, the 75 participants of the Libyan Political Dialogue Forum included regional and tribal figures; representatives of political factions. They were to vote to pick a three-person presidential council and a prime minister. Candidates for the three positions in a presidency council and for the post of prime minister were interviewed in live broadcast sessions for a week in February 2021. Competing blocs were formed by those seeking to be leaders of a new Libyan interim government joined in competing blocs and publicly auditioned for the top roles to seek backing from participants in the U.N.-backed talks. They promised not to run for office in the national elections planned for Dec. 24 and to step down from any other posts they held if they came to office through the U.N. process. The UN had released a list of 24 candidates for the three presidential council posts and 21 for the post of prime minister

Eventually Mohammed al-Menfi was chosed to serve as the presidency council head and Abdulhamid Dbeibeh as prime minister until the December 2021 election. Mohammed al Menfi was a Libyan diplomat and politician from Tobruk. He had served as the Libyan Ambassador to Greece.

In an outreach to local leaders Mohammad Younes Menfi, the chairman of the new Presidential Council, who had been living in Athens for the past three years, had come to Benghazi and met with dozens of tribal elders, academics and activists.

The new prime minister Abdulhamid Dbeibeh had told a news conference in Tripoli, that he had attempted a “fair distribution” of posts between the west, east and south of the country. He said, seven key portfolios would be handed to figures from Libya’s three main provinces in the east, west and south. The foreign ministry would be allocated to the east, the ministries of economy, trade and justice to the west, and the defence, interior and finance portfolios to the south.

The total size of the Cabinet was 33 with two deputy Prime Ministers. This large size had come in for criticism with observers saying there was no need to have such a big cabinet for a government that was to last only till December 2021. Dbeibah had defended the move, saying he wanted to form a government that was “balanced” and “really representative of all the Libyan people” and main regions.

There had been a promise in principle that the new government would include women in 30% of senior government roles, including in top cabinet posts. But so far there were only 15 percent -with the figure likely to rise as deputy ministers were appointed.

Libya’s got is first woman foreign minister, Najla el-Mangoush. A lawyer she had had a role in the transitional council that briefly governed Libya after its 2011 uprising. She was likely to have four other women colleagues in the cabinet including Halima Abdulrahman as justice minister.

The new PM presented his Cabinet to the Parliament which, after two days of debates, gave its approval with 121 of the 132 lawmakers present voting in support. For many analysts like Anas El Gomati, at the Sadeq Institute, the endorsement of the unity government was a “symbolic victory” as it was the first unified executive in nearly seven years for the whole country.

As in all such process allegations of corruption and bribes had been voiced. There were allegations before the vote , reportedly based on a confidential report by UN experts to be released in mid- March, that at least three participants were offered bribes of hundreds of thousands of dollars in November.

There were interesting reactions from the neighbourhood.

Turkey which had been supporting the erstwhile GNA said that Turkish troops would remain in Libya as long as the GNA request remained. A Turkish spokesperson said that the troops would provide education, health, humanitarian aid and consultancy support to Libya.

Egyptian President Abdel Fattah al-Sisi met Libyan prime minister Abdulhamid Dbeibeh in Cairo. He offered Egypt’s support in achieving stability in Libya and was planning to reopen its embassy in the capital Tripoli.

President Kais Saied of Tunisia became the first head of state to visit Libya a day after the interim administration took power in Tripoli. This was seen as a gesture both of relief that the civil war had ended and a signal of support to the new government.

Prior to the vote on deciding the PM and the Head of the Presidency Council France, Germany, Italy, the United Kingdom, and the United States had welcomed the Libyan Political Dialogue Forum’s (LPDF) vote in favor of the selection mechanism for a new interim executive authority. The statement said that the LPDF’s decision affirmed the demands of the Libyan people that it was time for a change of the status quo. The countries said they would lend full support to the LPDF’s efforts.

The United Nations Security Council had approved a proposal by Secretary General Antonio Guterres to appoint a new envoy Bulgarian diplomat Nickolay Mladenov to Libya, to take over from acting Special Representative Steffanie William, in charge of leading negotiations in the war-torn country since the resignation of former envoy Ghassan Salame in March.

US Secretary of State Antony J. Blinken had told Libyan interim Prime Minister Abdulhamid Dabaiba that the USA welcomed the establishment of the new interim Government of National Unity. Both emphasized the importance of ending the conflict through an inclusive political process, providing essential public services, and ensuring free, fair, and credible elections on December 24, 2021 and the need for full implementation of the ceasefire agreement signed on October 23, 2020, including the removal of all foreign forces and mercenaries from Libya without delay.

Russian Foreign Minister Sergey Lavrov had spoken on phone to both Abdul Hamid Dbeibah and Mohammad Younes Menfi to congratulate them on their election. He said Russia was ready for constructive engagement with the transitional administration of Libya with a view to overcoming the protracted crisis in the country as soon as possible. Interestingly Russia’s Wagner Group had been cited as a source of mercenaries sent to help Haftar in the fighting and even President Putin had been questioned about it. In December 2020, the European Union sanctioned Russia for what Brussels said was Moscow's destabilizing role in the country.

French President Macron meeting Mohammad Younes Menfi and Musa al-Koni, president and vice-president of Libya’s Presidential Council said that France owed “a debt to Libya and the Libyans, which was a decade of disorder.” France had been in the lead in the military operation that had deposed Muammar Gaddafi in 2011. Macron said France would reopen its embassy in Libya’s capital Tripoli in a gesture of support to the interim government.

Will Libya’s future be bright sombre or gloomy?

The answer would depend on the answer to the following questions:

· Will the elections take place in December 20 21? If they do will they be free fair transparent with full access to the media and international observers.

· Will the two armies of the rivals integrate into one national Army? Or will they maintain the rival powers for the future.

· Will Russia Turkey UAE Egypt France and others who have been involved in boosting one or the other faction lay off?

· Will Libya as oil begin to slow and bring back the resources necessary to improve the living standards of the people.

· Will the international financial community and donors be willing to arrive at arrangements to provide the necessary financial backing to The Libyan authorities for reconstruction and rehabilitation?

What has happened is that a baby has been born. It is still too early to judge how it will grow and mature. 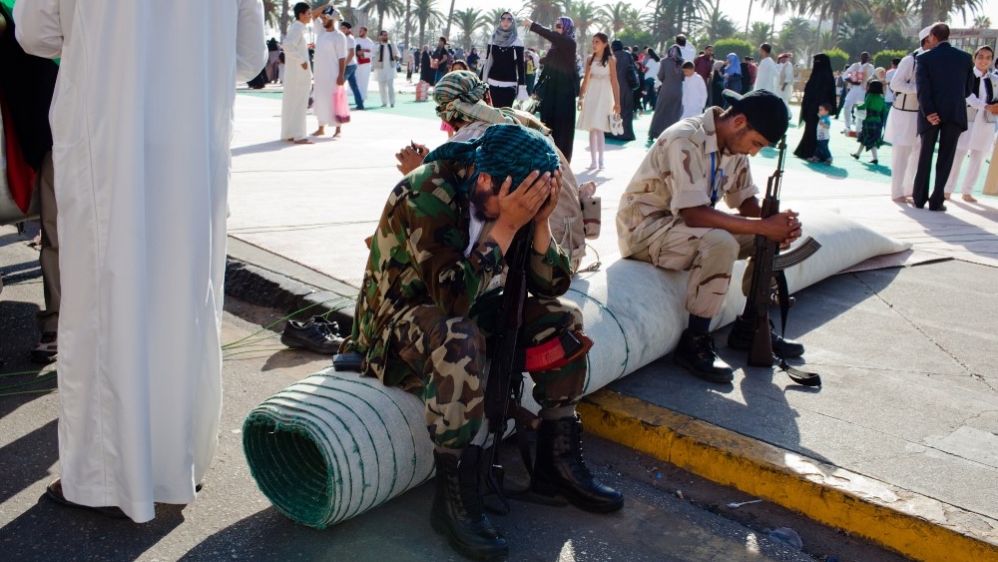