US State Department Concerned on Media Curbs in India

In a wide-ranging report on human rights violations in India in the year 2020, the US State Department Bureau of Democracy, Human Rights, and Labor, has, among other things, detailed attacks on press and media freedom.

Released on March 30, the report quoted Indian journalists as saying that press freedom declined during the year. It quotes Reporters without Borders 2020 World Press Freedom Index as saying that physical attacks and “coordinated hate campaigns waged on social networks” against journalists were cited as major areas of concern.

The US State Department report further said: “ Harassment and violence against journalists were particularly acute for female journalists. Journalists working in Jammu and Kashmir continued to face barriers to free reporting through communications and movement restrictions.”

“Pressure on media to amplify government perspectives increased following the May 2019 national elections. Criminal prosecutions were often used to gag journalists critical of the authorities, including the use of a section of the penal code that includes sedition punishable by life imprisonment,” it said.

Here is a sample of reported attacks:

In the first year since the abrogation of Article 370 of the Indian constitution affecting the status of Jammu and Kashmir (J and K), 14 instances of detention, police interrogations, and assaults on journalists had been reported.

The government also introduced a new media regulation policy in J and K, empowering local administration to determine “fake and antinational news” and to initiate related action against journalists.

On February 15, the Karnataka police arrested three engineering students of Kashmiri origin on sedition charges. According to police records, Basit Ashiq Ali, Talib Majeed, and Ameer Mohiuddin Wani recorded a video of themselves chanting slogans supporting Pakistan and posted the video on social media. They were arrested after college officials reported them to police.

On June 10, the students were released on bail. On February 20, the Karnataka police booked student activist Amulya Leona on sedition charges for shouting pro-Pakistan slogans in her speech at a rally in Bengaluru protesting the anti-Muslin Citizenship Amendment Act (CAA). A local court granted her bail on June 11.

On April 1, a complaint was filed against the founding editor of the news website The Wire, Siddharth Varadarajan, for his tweet referencing a report that the Uttar Pradesh chief minister, Yogi Adityanath, had insisted a religious gathering be held during the COVID-19 lockdown.

On May 11, Gujarat state police detained the editor and owner of Gujarati news website Face the Nation, Dhaval Patel, for publishing a report suggesting Gujarat’s chief minister might be replaced due to criticism over rising COVID-19 cases. Patel was charged with sedition and with spreading false panic. He was granted bail on May 27.

On May 19, the West Bengal government temporarily stopped the broadcast of Bengali news channel Calcutta News, which questioned the state government’s handling of the coronavirus pandemic, including allegations of under-reporting coronavirus infection rates and death numbers and severe mismanagement of hospitals.

On May 20, Srinagar Police summoned The Kashmir Walla editor Fahad Shah for covering an encounter between militants and security forces.

NGOs reported the arrest and detention of political and human rights activists who criticized the policies of Manipur’s state government. While some faced charges of sedition, promoting communal disharmony, public mischief, and criminal conspiracy, others were booked under the National Disaster Management Act.

United NGOs Mission Manipur reported that on April 12, the Manipur state government arrested Robin Rongmei, a social activist, under the act for posting a video on Facebook that showed shortages of essential items for children in a shelter home during the lockdown.

On May 25, Kolkata police summoned Anirban Chattopadhyay, editor of the leading Bengali newspaper Anandabazar Patrika, for interrogation. Police summoned him because his newspaper reported on the inadequate supply of personal protective equipment for the staff of a hospital handling COVID-19 cases.

On May 31, Chattopadhyay resigned his post as editor under pressure and to ease tensions with the government.

On June 5, Bengaluru police registered a case against former AII executive director Aakar Patel for a message he posted on Twitter that encouraged minority communities to emulate the racial justice protests abroad.

In February the Kashmir Press Club stated security agencies had routinely deployed intimidation tactics such as threats, summonses, and physical attacks on journalists in Jammu and Kashmir.

On February 8, journalists Naseer Ganai and Haroon Nabi were summoned to the police facility, where they were questioned for reporting on a statement by the Jammu Kashmir Liberation Front.

In June the Jammu and Kashmir government released the Media Policy-–2020, which authorizes the Directorate of Information and Publication Relations to “examine” the content of print, electronic, and other forms of media for “fake news, plagiarism, and unethical or antinational activities” in the name of law and order.

Under the new media policy, government action could range from legal proceedings against journalists for “indulging in fake news, unethical or antinational activities, or plagiarism” to withholding advertisements to any media that “incite or tends to incite violence, question sovereignty and the integrity of India, or violate the accepted norms of public decency and behavior.”

On June 13, Uttar Pradesh authorities charged Scroll.in executive editor Supriya Sharma for a news report critical of the COVID-19 lockdown under the Scheduled Castes and Scheduled Tribes (Prevention of Atrocities) Act, 1989, as well as under sections of the penal code regarding printing defamatory matter and negligent acts likely to spread infection of disease dangerous to life.

Police also named the Mumbai-based editor in chief of Scroll.in in the first information report (FIR). On August 26, the Allahabad High Court granted Sharma protection from immediate arrest in the case but allowed the investigation to continue.

On July 1, UNESCO Director-General Audrey Azoulay called for authorities to end “gunpoint censorship” and prosecute those responsible for the killing of Shubham Mani Tripathi, a journalist for the newspaper Kampu Mail. Tripathi died on June 19 when he was shot six times by two gunmen while on his way home in Uttar Pradesh. His killing was allegedly in retaliation for his investigative reports into connections between illegal sand mining and corruption allegations. The two assailants, along with a third individual, were arrested.

On March 6, the Union Ministry of Information and Broadcasting placed a 48-hour ban on two Malayalam news channels for broadcasting footage of the February riots in New Delhi, allegedly in violation of the Cable Network Television Network Act. Hours after the ban was imposed, the ministry revoked its order and restored the transmission of both channels.

Police rarely identified suspects involved in the killing of journalists. The Committee to Protect Journalists reported at least 79 journalists had been killed between 1992 and 2020. According to the 2020 World Press Freedom Index, at least four journalists were killed in connection with their work as of December.

On August 11, Shahid Tantray, Prabhjit Singh, and a third unidentified female–all journalists for The Caravan magazine–were attacked by a mob while reporting in New Delhi. Tantray reported that after identifying him as a Muslim, “the mob beat [him], punched on [his] neck and back, and tried to strangle [him] with the camera strap.” The Caravan stated the female journalist was sexually harassed. Police did not file a FIR or make arrests.

In September, Parashar Biswas, a journalist from the daily newspaper Syandan Patrika in Tripura, was beaten by unidentified individuals after he criticized Chief Minister Biplab Deb’s comments made against media outlets for publishing stories of alleged state mismanagement of the coronavirus crisis.

Online and mobile harassment was especially prevalent, and incidents of internet “trolling,” or making deliberately offensive or provocative online posts with the aim of upsetting someone, continued to rise. Journalists were threatened online with violence and, in the case of female journalists, rape.

In February 2019 the minister of state in the Ministry of Communications told parliament the government had ordered the Department of Telecommunications to block 17,444 sites during the previous three years on the basis of recommendations of the Central Bureau of Investigation, the Ministry of Electronics and Information Technology, courts of law, and several other organizations.

According to reports, at least 55 journalists and editors were arrested or booked for reporting on the COVID-19 lockdown. In 2018 the Ministry of Electronics and Information Technology revealed that 14,221 websites had been blocked since 2010. Between January and October 2019, the ministry issued blocking orders for an additional 20 websites.

On May 18, Andhra Pradesh police arrested 66-year-old Ranganayaki Poonthota, following her Facebook post in which she questioned the government’s handling and police investigation of a styrene gas leak that killed at least 11 persons. She was arrested for making statements that create or promote enmity, indulging in wanton vilification, disobedience to order duly promulgated by public servant, and criminal conspiracy. The NGO Human Rights Forum described the case as a “brazen attack on free speech” and demanded withdrawal of the case.

According to NGO Software Freedom Law Center, the central and state governments shut down the internet in different locations 106 times in 2019 and 76 times as of December 21. The center reported the longest shutdown occurred between August 4, 2019, and March 4 in Jammu and Kashmir.

Authorities restored mobile 2G services in April and landline internet in August. Mobile 3G and 4G connections remained blocked as of December, although intermittent access was restored in certain districts.

In January the Supreme Court ruled that the indefinite shutdown of the internet in Jammu and Kashmir was illegal.

Government requests for user data from internet companies increased dramatically. According to Facebook’s transparency report, the government made 49,382 data requests in 2019, a 32 percent increase from 2018.

Twitter’s Transparency Report indicated 1,263 account information requests from the government in 2019, a 63 percent increase from 2018.

The Indian Ministry of External Affairs dismissed the US report. “This is clearly an internal exercise of the US government,” Ministry spokesperson Arindam Bagchi said at a press briefing. “We are not a party to it. There should be a proper understanding of developments in India.” 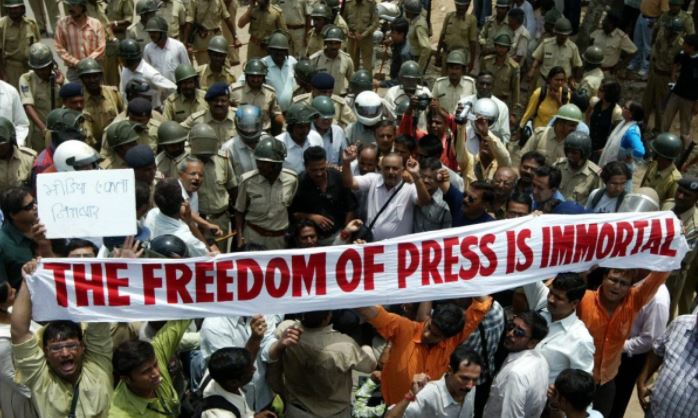