Dissolution of Nepalese Parliament is a Victory for Oli

Even as Nepal was reeling under a COVID-19 pandemic with more than 8,000 new cases coming up every day, President Bidya Devi Bhandari dissolved parliament at the stroke of midnight on May 21, and fixed fresh elections for November to end a fractious political stalemate.

The Presidential statement said that neither the caretaker Prime Minister K.P. Sharma Oli, nor opposition Nepali Congress leader Sher Bahadur Deuba were able to demonstrate a majority in the House of Representatives to form a new government by the May 21 deadline. The dissolution followed the advice of the cabinet headed by Prime Minister Oli.

The first phase of the general elections will be held on November 12 and the second phase on November 19, the Presidential statement said.

Unable to get on with his colleagues in the coalition government, who were accusing him of persistent arbitrariness, Oli got the parliament dissolved in December 2020. But the Supreme Court overturned the dissolution and re-installed parliament.

Oli then sought a vote of confidence which he lost. He was able to secure only 93 votes when the requirement was 136. More than 120 voted against and nearly two dozen leaders from his own party skipped the process.

However, Oli continued to be Prime Minister of a caretaker government. When renewed bids to form an alternative government failed, Oli and President Bhandari had no option but to seek fresh elections, pandemic or no pandemic. Indeed Nepal is reeling under COVID-19 with nearly 490,000 cases, almost 6000 deaths and more than 8000 news cases coming up every day.

But almost from the word go, the two parties and the two leaders had not been able to see eye to eye. While Oli claimed that Prachanda was too demanding and uncooperative, Prachanda claimed that Oli was monopolizing power and that he was totally marginalized.

In February 2021, two months after the dissolution of parliament in December 2020, the Supreme Court annulled the dissolution. By another ruling, the court also annulled the 2018 CPN (UML)-CPN (Maloist Center) merger, thus reviving the old formations.

The dissolution of parliament and the annulment of the 2018 merger both suited Oli eminently because he wanted fresh elections and also to break his ties with CPN (MC). At one stage, he had even told Prachanda that he would like to split but Prachanda wanted reconciliation not a divorce. Oli on the other hand, was hoping to form a new coalition under his leadership.

The reinstatement of the parliament was a blow to Oli in as much as his hopes of having fresh elections were dashed. In a bid to build up and strengthen his Nepalese nationalist credentials, Oli even picked up fights with neighboring India over the Western border and officially published maps which showed the disputed areas as part of Nepal. He then declared that the birthplace the Hindu God Rama was not in India but in Nepal.

While Oli’s territorial claims against India were endorsed by the Nepalese parliament, his political support base did not expand as a result of his anti-Indian stand. Rival parties and factions within his party continued to torment him on other issues especially arbitrariness.

With the help of President Bhandari (who was a party colleague earlier), Oli introduced Ordinances which will help split parliamentary parties. But these Ordinances ran into a storm and had to be repealed.

Meanwhile, China, which had been instrumental in bringing the two Nepalese communist parties together in 2018, got worried and tried to get Oli and Prachanda to patch up. In May 2020, Chinese Ambassador Hou Yanqi got unusually active.

Alarmed by this, in October 2020, India sent the chief of its external intelligence agency RAW, Samant Kumar Goel, post haste to Nepal to strike a deal with Oli. Oli had had dealings with RAW earlier which RAW was keen to exploit. Apparently, Goel was able to strike a deal with Oli in as much as he dropped his anti-India stance and resisted China’s efforts to get him to make up with Prachanda.

However, all this this did not bring an end to chronic political rivalries in Nepal. In December 2020, Oli dissolved parliament. But that too did not bring the curtains down on unsavory jostling for power. The Supreme Court annulled the dissolution of parliament to Oli’s discomfiture. But he was compensated somewhat when the court also annulled the unity of the CPN-UML and CPL MC, something Oli desperately wanted.

Oli was hoping to stitch together a fresh coalition in the restored parliament. But, as expected, he failed. Neither could the opposition stich together a coalition which could claim majority support.

However, as Oli continued as caretaker PM as his party, CPN-UML was still the single largest party in parliament with 121 members. He was required to show majority support within 30 days. But he failed to strike a deal with the Nepali Congress leader Sher Bahadur Deuba, making dissolution of parliament and fresh polls inevitable. 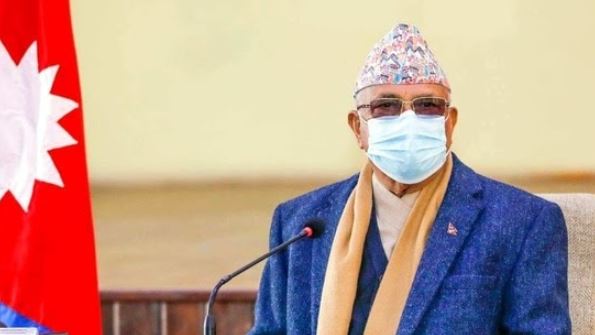