3 Factors That Could Work for the New Israeli Coalition.

I will be back soon”- Netanyahu

Bibi Raised and Betrayed a Generation of Politicians, Last Night, Dethroned Him’ ran the headline in the Israeli newspaper Haaretz the morning after Benjamin Netanyhau lost the Knesset vote by a slender margin of five votes (64-59) to his former chief of staff Naftali Bennett, 49.

And US President Joe Biden recognised the shift with a statement congratulating the new PM with, ““I look forward to working with Prime Minister Bennett to strengthen all aspects of the close and enduring relationship between our two nations. Israel has no better friend than the United States. The bond that unites our people is evidence of our shared values and decades of close cooperation and as we continue to strengthen our partnership, the United States remains unwavering in its support for Israel’s security.”

Even as Likud lawmakers owing allegiance to Netanyahu who promised to be “back soon” after his 12 year term ended, shouted and jeered at Bennet for being a “traitor” the new PM himself said, “we stopped the train before the abyss, the time has come for different leaders, from all parts of the people, to stop, to stop this madness.”

The madness he was referring to is clearly Netanyahu’s assault on the Palestinians that left 66 children dead amidst a wave of terror and destruction that has caused alarm bells to ring across the world. In an outpouring people in different capitals came out against the Israeli military action, with Jews joining in and distancing themselves from the barbaric assault.

Netanyahu had clearly organised this to win the vote and the subsequent elections, but the attack misfired with a wave of revulsion and anger sweeping the globe. It gave new impetus to the coalition of parties that passed for the opposition and they all came together to get the numbers to defeat him in the Knesset. The coalition is a motley group of left and right and liberals, including for the first time in Israel’s history an Arab Israeli party that represents that country’s 21% Arab/ Palestinian minority for whatever that is worth.

However, the high casualties and the barbaric targeting of civilians, including the media, did not pan out as Netanyahu had planned. And opinion turned against him giving a new boost to the smaller opposition parties. Although not many within and outside Israel are giving it high survival chances, a major concession made at the onset indicates perhaps a new determination to keep in control. That came from Yair Lapid, a former television anchor, who was heading the coalition as the chief of the Yesh Atid party. He is also a former finance minister. He gave in to Bennet’s minority party demands to keep the flock together as it were, with Bennet becoming the PM till 2023 after which the post will go to Lapid, if of course they are all together by then.

Bennet himself is viewed as a far right politician, with Palestinians particularly not enamoured of the change of guard. It is all the same, has been the consensus emerging from the Palestinians who see little difference in individual PMs and are more concerned with the larger Zionist policies of the Israeli state.

However, a break was needed to one, to break the Netanyahu stranglehold as he was becoming more and more vicious with every attack on Gaza; and two, his 12 years in power have been full of, as the new PM said, “madness.”

One can see three checks on the new government that will come into play regardless of Bennett's personal affiliations. He is right wing but clearly willing to go with the times, having changed parties five times in his short political career. And has willingly tied up with the left and the Arab parties knowing that they will impose a set of checks and balances that he will have to respect given the slender margin of victory.

So one, the checks will come from within the coalition itself as Bennet will be required to walk a tightrope of compromise and accommodation to keep the government in power;

Two, the coalition and the people have understood that the world is no longer in a mood for continuous assault on the Palestinians. And a repeat of Netanyahu’s action will place all these parties in the dock, more effectively and uncompromisingly than with Likud that still remains the largest political party in Israel. And that success will lie largely in the coalition’s ability to bring together a common minimum program for development and relative peace in the region. As that is the message coming out loud and clear from within the media and the protests in Israel as well.

And three, US President Joe Biden is looking for a slight shift in the American policy in West Asia that will move closer to peace and containment than during the Trump and Obama terms in office. The containment of Iran not through war but dialogue is central to this, as is the building of ties and relations with Turkey and Egypt. The last, in particular, has emerged as a mediator in the current Palestinian-Israel conflict and will continue to play a key role in whatever the Biden administration has planned, and is planning, for the region. In that equation Bennet seems to have come as a relief of sorts, as the break will give Biden the fig leaf he needs to cover the Amercians tracks on West Asian soil. At least partially and momentarily.

Against all this of course is the coalition's own contradictions that Bennet will have to manage to prevent the experiment from collapsing. And also now the leader of the Opposition, Netanyahu who seems to have decided to widen the chinks in the coalition to chasms, and bring down the government. 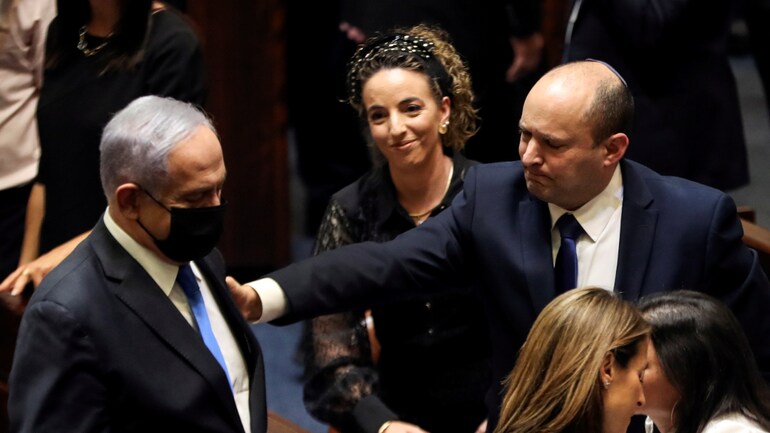