On July 1, Myanmar’s military junta completed five months as the ruler of the country after the overthrow of the democratically-elected Aung San Suu Kyi government on February 1.

Over 800 were killed and 6000 detained in crackdowns targeting pro-democracy agitators from February 1 to June 30.

Military action is continuing against ethnic non-Bamar communities and non-Buddhist religious minorities in the North East and North West of the country.

The United Nations and the Western powers led by the United States continue to condemn the forcible take over. The US has imposed a series of new sanctions against the regime, including freezing US$ 1 billion in reserves that Myanmar’s Central Bank was holding at the New York Fed.

Such measures and posturing have had an impact, albeit small, on the Junta led by Senior General Min Aung Hlaing. The Junta has released 2200 out of the 6421 political detainees. But there is no sign of remorse about seizing power illegally and unleashing violence on protesters.

The military’s stubbornness is based on three support planks: its direct or indirect dominance over Myanmar politics since 1962; the full backing it gives to the Bamar majority’s dominance over ethnic and religious minorities; and lastly, the support it gets from China, India, Russia and ASEAN.

The military, called the Tatmadaw, has been the most powerful institution in Myanmar since independence in 1948. Myanmar’s first national leader was a military man, Gen. Aung San, father of Aung San Suu Kyi. Though Gen. Aung San was assassinated in 1947, the country’s military enjoyed unchecked control over the newly independent country’s politics from the very beginning.

The fig leaf of democracy was removed by Gen. Ne Win when he staged a coup in 1962. He banned all opposition parties and nationalized the country’s major industries and businesses to get rid of foreigners. The minorities were put under greater pressure.

However, miIitary-rule proved to be economically disastrous and in 1988, there was a student revolt which was suppressed by killing an estimated 5,000 civilians.

Nonetheless, the agitation led to the founding of the National League for Democracy (NLD) by Aung San Suu Kyi. Under international pressure, elections were held. The NLD swept it. But the Junta refused to recognize the result and Suu Kyi was put under house arrest. No elections were held for the next 18 years.

Under Western pressure, the Tatmadaw drafted a new constitution in 2008, but without consulting the NLD. The Tatmadaw followed this up with a “fraudulent” referendum. The new constitution preserved the military’s control over the government by reserving 25% of all seats in national and local parliaments for serving military officials. This gave the Tatmadaw de facto power to veto any constitutional reforms.

The military retained control over the country’s mining, oil and gas industries. The constitution also gave the Tatmadaw complete financial independence. According to Amnesty International the Tatmadaw-run Myanmar Economic Holdings Limited (MEHL) had made US$ 18 billion between 1990 and 2010.

With support from the Buddhist Bamar majority, the Tatmadaw ruthlessly went after the ethnic religious minorities like the Muslim Rohingyas, and the Christian tribes in the North. Since the Tatmadaw was resisting Western pressure firmly, it got, and still gets, plaudits from hardcore nationalists among the majority Bamar community.

The power of the Bamar’s ideology is so great that even an avowed democrat Aung San Suu Kyi continued repressing the minorities, especially the Muslim Rohingyas, when she was in power as State Counselor till April 1.

Eying Myanmar’s rich natural resources, and needing access to the Bay of Bengal, China has been cozying up to the Junta. According to Al Jazeera Chinese Foreign Minister Wang Yi visited Myanmar just weeks before the coup and after meeting Gen. Aung Hlaing, declared that “China will continue to back Myanmar in safeguarding its sovereignty, national dignity and legitimate rights and interests.”

India appears to have strategic and economic reasons to be siding with the powers-that-be in Yangon no matter who they are. India supported the crackdown against the Rohingyas fearing the influx of Islamic radicals coming into India as refugees.

India needs Yangon to keep its North Eastern rebels in check. It also needs the Junta’s blessings to exploit Myanmar’s resources. New Delhi avoided a resolution in the UN General Assembly condemning the military coup and calling for a ban on arms sales to Myanmar.

Alienated from the democracy-touting West, the Junta has turned to Russia which is the second-largest arms supplier to Myanmar after China. Recently, during a vist to Moscow, Gen.Hlaing was made a Professor in the Russian Ministry of Defense for his contribution to Russo-Myanmar ties.

ASEAN, which is partly under Western influence, given the capitalist economic policies followed by its members, tried to get the Junta to restore democracy. But its envoys did little more than enjoying the hospitality of the Junta at Yangon.

Commentators have said that this was because many ASEAN members were not democracies or true democracies, themselves. Vietnam, Thailand, Singapore have authoritarian regimes and some like Philippines and Malaysia are no paragons of democratic virtue. And like other nations, they value regime stability for economic ties to grow, rather than democracy per se.

This leads us to the primary attraction in Myanmar, which are its natural resources. In 2016, the US Department of State estimated a total export value of mined resources at US$ 15.7 billion. Myanmar is the largest producer of jade in the world and it produces jadeite, the highest quality of jade. The jade industry is worth US$ 30 billion.

Rubies, sapphires, and diamonds are also found in significant quantities in Myanmar. US$ 975 million worth of gem sales were conducted at the country's emporiums in the 2017-18 financial year.

Mineable metals, such as gold, silver, copper, tin, tungsten, zinc, and nickel are abundant in Myanmar. In 2013, the country produced 9300 metric tons of nickel, an increase of 4300 metric tons compared to 2012. Copper is also present.

Coal, oil, and natural gas all feature prominently in Myanmar’s natural wealth. Natural gas accounts for 40% of Myanmar’s exports. It exported around US$ 6 billion of petroleum in 2016. A pipeline that connects Myanmar and China delivers gas from the Bay of Bengal to China. Five countries, including China, Myanmar, South Korea and India have invested in this project.

In 2013, another natural gas pipeline that connected the Shwe field complex, on the Bay of Bengal, to Yunnan province, southwest China was completed at a cost of US$ 2 billion. In 2013, there were 560 coal mines in Myanmar, and the annual yield of coal was about 700,000 metric tonnes. In the 2015-2016 fiscal year, FDI peaked at nearly US$ 9.5 billion.

All in all, the prospect of the world joining hands to restore democracy in Myanmar is dim in the foreseeable future. The other worrying issue is: Will restoration of democracy ensure the rights of the ethnic and religious minorities?

Past experience shows that democracy in Myanmar will be meant only for the majority Buddhist Bamar community and not the minorities. When there was some kind of democracy between 1948 and 1962 and also under the rule of the NLD led by Aung San Suu Kyi, democracy was not extended to the Muslim Rohingyas and the tribal communities.

Military action did not cease under her. Suu Kyi went to the International Court of Justice at The Hague to defend the war against the Rohingyas, although lakhs of them had to flee to Bangladesh to live in refugee camps. 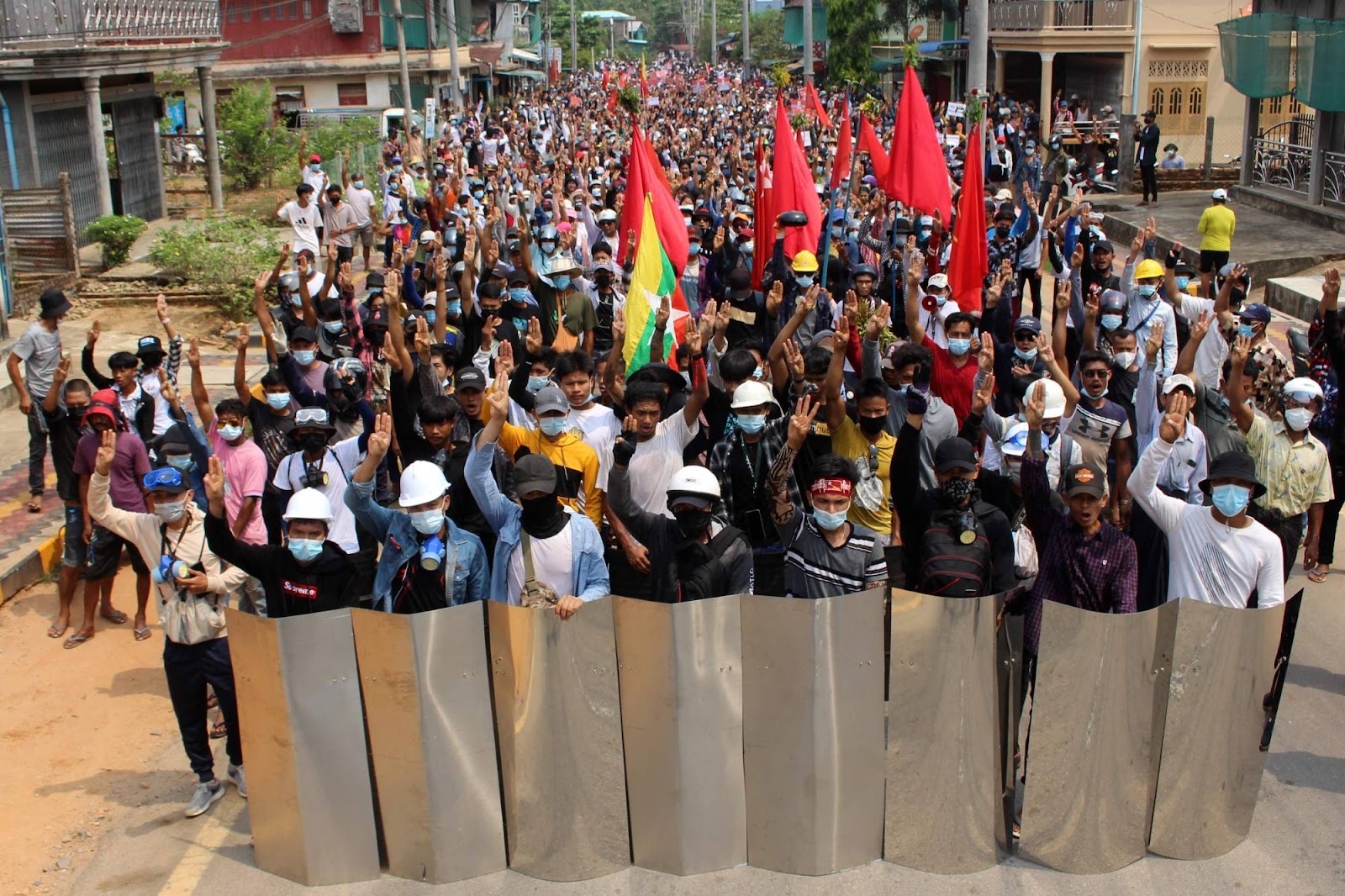