Israel’s parliament failed to renew the so-called citizenship law, an apartheid measure designed to limit the number of indigenous Palestinians in the country.

Despite the tie vote of 59-59 in the Knesset on Monday, the law’s failure was not due to any sudden awakening of anti-racism among Israeli leaders. Indeed the racist law is supported both by the new coalition government and the opposition led by Benjamin Netanyahu.

But Netanyahu whipped his Likud Party and its allies to vote against the law merely to undermine the coalition that ousted him from office – all the while complaining that a compromise designed to let it pass was not sufficiently anti-Palestinian.

A handful of Palestinian lawmakers in the Knesset also voted against the law on principle, along with one member of Prime Minister Naftali Bennett’s Yamina party. That was enough to sink it – for now.

An angry Bennett said Tuesday that the opposition “damaged the country” by failing to back the law “out of some sort of spite.”

Bennett vowed to “fix the matter” but did not spell out what he would do.

As a committed racist, Bennett’s rage at the law being allowed to lapse is not surprising.

The “Citizenship and Entry into Israel Law” prohibits Israeli citizens who marry Palestinians from the occupied West Bank or Gaza Strip, or nationals from several other regional states, from living with their spouse in Israel.

“This law is one of most discriminatory and racist laws promulgated by Israel, and thus it must be condemned and revoked,” Adalah, a legal advocacy group for Palestinian citizens of Israel, said before the vote.

“No democratic country in the world denies residency or citizenship to spouses of its own citizens on the basis of their spouses’ national, racial or ethnic affiliation, while simultaneously labeling them as enemies.”

But that is precisely what this law does, because under Israel’s Zionist system, non-Jews – especially Palestine’s indigenous Muslim and Christian Palestinian population – are seen as a “demographic threat.”

The law was originally adopted as an emergency measure in 2003, but has been renewed annually ever since – until this week.

As I’ve noted previously, the intent and effect of the law is similar to the laws that used to exist in apartheid South Africa to prevent mixing of people of different races, and to control where Black people could live – laws such as the Group Areas Act and the Prohibition of Mixed Marriages Act.

While the Israeli law does not ban marriages outright, it does effectively prevent Israeli citizens and Palestinians from exercising their right to family life.

It aims to achieve the same racist goal, albeit by slightly more subtle means than were used in South Africa, as I explain in my 2014 book The Battle for Justice in Palestine.

The main targets of the law are the roughly two million Palestinian citizens of Israel.

Unlike Palestinians in the occupied West Bank or Gaza, Palestinian citizens of Israel have the right to vote in Israeli elections, but because they are not Jewish, they are still subject to dozens of discriminatory Israeli laws.

The citizenship law particularly affects Palestinian citizens of Israel because they are the most likely to marry fellow Palestinians from the West Bank or Gaza Strip, or from other countries, and to seek to live with their spouses in their own country.

Like virtually all Israel’s racist measures against Palestinians, this law has been officially justified as necessary for “security.” But Israeli leaders are open that this is a pretense.

Yair Lapid, Israel’s alternate prime minister and head of the allegedly centrist Yesh Atid party, made this clear as he tried to rally support before the Knesset vote.

“There is no need to hide from the essence of this law. This is one of the tools designed to guarantee a Jewish majority in the state,” he tweeted.

“Israel is the nation-state of the Jewish people.”

Lapid’s words match almost verbatim those of Ariel Sharon, the notorious war criminal who was Israel’s prime minister when the law first passed in 2003.

“There is no need to hide behind security arguments,” Sharon said at the time. “There is a need for the existence of a Jewish state.”

Similarly, Prime Minister Bennett accused Amichai Chikli, the member of his own party who voted against the law, of effectively voting to “lower the gates and enable mass entry of Palestinians.”

The Yamina lawmaker had in fact voted against the law because the compromise presented to the Knesset made it insufficiently anti-Palestinian.

The vote in the Knesset followed hours of frantic horse-trading aimed at securing the backing of a few Palestinian lawmakers and left-wing Zionist parties.

In the end, the small Islamist party Ra’am led by Mansour Abbas, and the left-Zionist party Meretz – both members of Bennett’s coalition – backed the law, although two Ra’am lawmakers ended up abstaining.

This came after a “compromise” that would have extended the racist measure for only six months, while granting “residency” visas to a handful of Palestinian families.

Netanyahu’s Likud Party also justified its opposition to the renewal on the grounds that the compromise was insufficiently racist.

Of course this is disingenuous, because had Likud supported the law in its original form – as it has in previous years – the racist measure would have been renewed by a landslide.

Advocacy group Adalah said it rejected “any agreement or arrangement that does not nullify and revoke the unjust citizenship law.”

The six members of the Joint List – the predominantly Palestinian parties in the Knesset that oppose the government – voted against renewal.

There should be no illusion that the lapsing of the law will offer any reprieve to Palestinian families divided by Israeli apartheid policies.

“Instead of the blanket prohibition on their receiving full residency rights, the families will have the option of applying for residency to the interior ministry, which will have to supply specific grounds if they deny them,” according to Israel’s Haaretz newspaper.

“The ministry will almost certainly try to smother them in bureaucracy and find every reason to deny them, but some may get through.”

That’s an optimistic assessment, not least because the interior minister is Ayelet Shaked, a member of Bennett’s Yamina.

Shaked, a former justice minister, is notorious for promoting a call for genocide of the Palestinians on the eve of Israel’s 2014 massacre in Gaza.

On Tuesday, Shaked accused the Likud opposition of teaming up with anti-Zionists and Palestinians in the Knesset to overturn “a law that is important for the security of the state and its character.”

She claimed this was a “big victory for post-Zionism.”

That’s an admission – even if unintended – that Zionism and racism are inseparable. 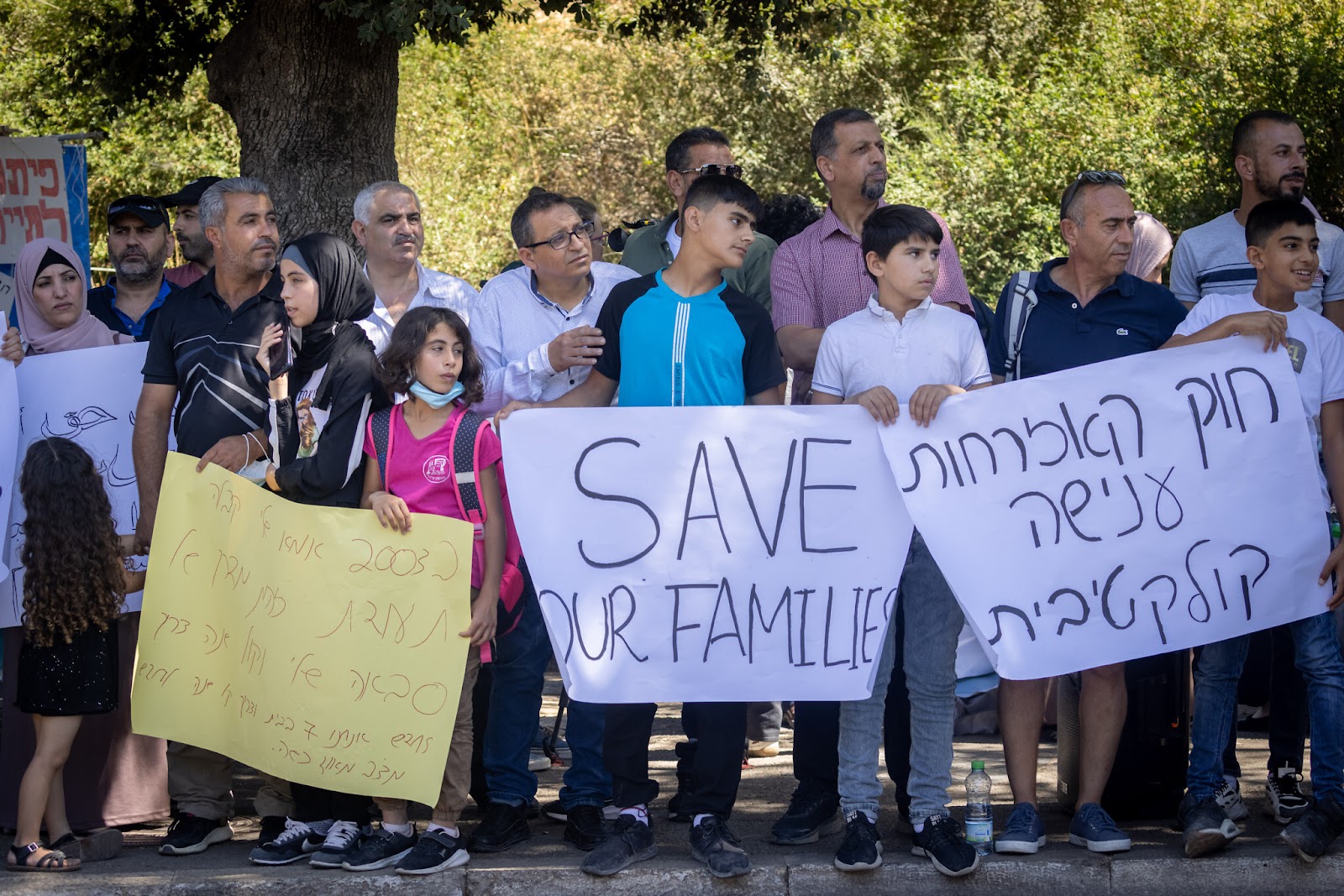