China Engages Both Ghani and Taliban

The ministerial meeting of the Shanghai Cooperation Organization (SCO) and the meeting of the SCO-Afghanistan working group at Dushanbe on July 13-14 have thrown light on the templates of China’s approach to the evolving situation in Afghanistan.

The elucidation of China’s intentions and motivations by China’s State Councilor and Foreign Minister Wang Yi is timely and relevant since Beijing has shifted gear to a more proactive role at the centerstage of the Afghan peace process lately.

Wang’s remarks at a press conference in Dushanbe on Wednesday regarding the Afghan situation provides an invaluable reference point amidst the paranoia in the western (and Indian) media that China is about to gobble up Afghanistan. To rational minds, evidently, Beijing is extra-vigilant that it should not get sucked into the Afghan whirlpool. This is the first thing.

Put simply, China will not make a military intervention in Afghanistan and repeat the mistake that the former Soviet Union and the United States made in modern history. Period. Beneath that threshold, however, China is a stakeholder in Afghanistan’s security and stability.

China is confident that the fallouts from the Afghan security situation can be contained. It constructively engages both the Ashraf Ghani government and the Taliban. Beijing enjoys excellent rapport with the Ghani government, which it supported quietly all these years and whose record in office it regards as rather creditable under the difficult conditions.

Equally, Beijing appreciates that the Ghani government has accorded the highest importance to foster ties with China, amongst all regional states, given China’s commitment to the stabilisation of the Afghan situation, which is non-partisan and is devoid of geopolitics. Indeed, credit must be given to Beijing for keeping such strong ties with the Ghani government while also keeping lines of communication open to the Taliban.

The depth and resilience of China-Taliban ties has been a topic of speculation, predicated largely on the facile assumption of a China-Pakistan-Taliban nexus, so to speak. But the reality is more complex.

The Taliban professed friendship with China but the Dushanbe conference there relieved the faultlines in that relationship. Thus, more than once, Wang openly expressed China’s discomfort that the Taliban is yet to make a clean break with all terrorist forces and return to the mainstream of Afghan politics “with a responsible attitude toward the country and people.” This stunning remark must be carefully understood in all its dimensions.

Suffice to say, China, as a neighbouring country, will not be prescriptive about the Afghan nation’s Islamic moorings and will scrupulously uphold its core principle of non-interference in that country’s internal affairs, but is also acutely conscious that a thin line separates Islamic militancy and terrorism.

It cannot be otherwise, since China has a Muslim population anywhere between 20-25 million people inhabiting the central and western regions of Xinjiang, Gansu, Ningxia, etc. that have geographical proximity to Central Asia.

The paradox here is that while China had misgivings about the US’ hidden agenda, its bigger worry still is that in the downstream of the American pullout, the challenge of terrorism may become more daunting, as terrorist groups such as the East Turkestan Islamic Movement, which threaten Xinjiang, may get greater latitude and space to operate out of Afghan soil.

Certainly, China cannot entirely place its trust on Pakistan to leverage the Taliban in a big country such as Afghanistan. Of course, Taliban spokespersons have described China as “a friend of Afghanistan.” But China agonises as to whether the Taliban is in a position to fulfil the Chinese expectations. The litmus test lies in the Taliban’s willingness to make a clean break with all terrorist forces.

Clearly, China will not want the Afghan state structure to collapse or a security vacuum to develop in Afghanistan. China, therefore, is unlikely to terminate the material support, humanitarian aid and weapons supplies to the Afghan government or roll back on the intelligence cooperation it has been extending to strengthen Kabul’s counter-terrorist operations.

Without doubt, a meltdown of the Afghan state is the ultimate nightmare scenario for Beijing. In this regard, China and Iran have almost a similar approach. Unlike Russia, which has had a testy relationship with Ghani, China and Iran are reasonably satisfied that they have a receptive interlocutor in the Kabul government. But there is the gnawing doubt all the same about the durability of the Ghani government in the face of the mounting challenge from the Taliban.

Wang has offered that China is ready to facilitate/host inter-Afghan negotiations “at any time” and contribute to the political settlement of the Afghan issue. China is largely ploughing an independent furrow, tapping into its own vast reserves in terms of its special ties with Pakistan and friendly equations with the Kabul set-up, its large capacity to be a provider of material help, its credentials as a benevolent neighbour and above all, its constructive approach.

China’s security-oriented concerns are and very specific and there is a convergence with Russia on this score insofar as both countries fear that the deteriorating situation in Afghanistan may quickly spread to Central Asia. The upgrade of the SCO-Afghanistan Contact Group to the foreign minister level for the first time since the inception of the format in 2005 indicates their sense of urgency.

Wang refrained from calling for an interim government in Afghanistan. But then, why should China inherit the legacy of the Doha pact? A commentary in the Global Times has underscored that “China’s position on Afghanistan remains unchanged and China still praises the Afghan government for making efforts to stabilise the country despite the Taliban expressing friendship to China.”

It will come as an eyeopener that rather than revelling in wasteful projection of power into post-American Afghanistan, China takes the long view. Chinese estimation is that for a foreseeable future, no matter who forms the Afghan government, continuing anti-terrorism will be Afghanistan’s international responsibility and, therefore, will remain the foundation of future China-Afghanistan relations.

At the SCO-Afghanistan contact group meeting, Wang urged all Afghan factions to clarify the road map and timetable for reconciliation, so as to lay a solid foundation for “a broad, inclusive political structure” in Afghanistan. Notably, in the presence of the Afghan foreign minister, Wang repeated his call on the Taliban to honour its commitment to break with international terrorist organisations. read more

In an ideal situation, China and the US could have been partners. But the transparency is simply not there in their relationship. Their conversation has broken down. Wang called on the US “to honour its commitment and increase its input” but he also stressed alongside that the regional states should be vigilant about any attempt to undermine regional security and stability by any outsider exploiting the chaos in Afghanistan.

Simply put, China views the American intentions in Afghanistan with great suspicion. It doesn’t expect that the US will show enthusiasm for Afghanistan’s reconstruction work or nation-building. Nonetheless, China anticipates not only continued US involvement in Afghanistan but even attempts to expand American military presence in the region, on the pretext of counter-terrorist activity, for geopolitical reasons. 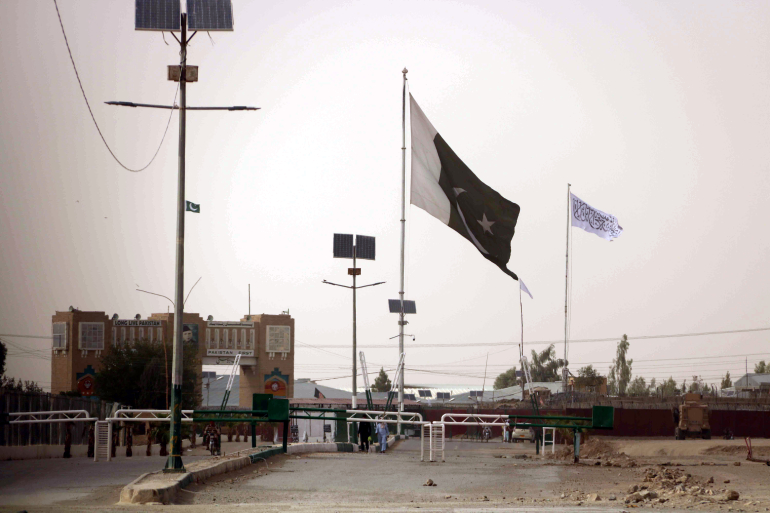 Cover Photograph: Flag of Afghan Taliban (in white) was raised on the Afghan side of the border with Pakistan at the major border crossing at Chaman, July 14 2021.