Is Sri Lanka Tilting Towards the West?

Sri Lanka appears to be building bridges with the US and other Western nations, reflecting a growing awareness of two things: (a) the West’s economic importance to it (b) the long term political and economic cost of high dependency on China.

The awareness of the Western nations’ economic importance is rooted in the on-going economic crisis in Sri Lanka. The crisis cannot be managed by ignoring or being hostile to the US and EU, which are the most important markets for Sri Lanka’s exports.

The US is Sri Lanka’s single biggest export market. In 2020, Sri Lanka’ exports to the US amounted to US$ 2.66 billion. Except for India, all other major importers from Sri Lanka were from Europe, an ally of the US. As a collective, the European Union accounted for 22.4% of Sri Lanka’s exports.

These high figures are very largely due to the GSP Plus tariff concession given by the EU to Sri Lanka. Before further extending the concession, the EU is to send an inspection team to Sri Lanka. The Lankan government is expected to go the extra mile to please the EU team in view of the importance of the GSP-Plus concessions for the very survival of the garment industry which is a top contributor of dollars to the national kitty.

However, even as the EU is planning to send a mission to the island nation, Sri Lanka has come in for censure at the UN Human Rights Council. Sri Lanka is therefore in the economic and political vice-like grip of the West. But in contrast to the immediate past, Colombo has taken a softer line at the on-going 48 th. Regular Session of the UNHRC.

There is a severe dollar shortage in the island nation, which has adversely affected even imports of essential commodities. Export earnings have dwindled due to the coronavirus pandemic. Income from tourism is nil. The only industrial sector which is surviving is the garment industry but the market for Sri Lankan garments is in US and Europe.

In the absence sufficient economic investments and insufficient help with COVID-19 vaccines from the West, Sri Lanka has been heavily depending on Chinese funds for its infrastructure projects and also vaccines to contain COVID-19 pandemic. It has, therefore, gratefully accepted Chinese largesse to tide over the on-going economic crisis and the pandemic.

But, at the same time, Sri Lanka is aware that it has become the butt of criticism in the West and India, for depending heavily on China, which is said to be drawing it into a “debt trap”. Looking at Sri Lanka from a geo-strategic angle, the West and India have deep apprehensions about Colombo’s pro-China leanings.

Be that as it may, the Sri Lankan course correction is not expected to be major or radical, but incremental and tentative. This is because any radical departure from the present policies would be politically untenable given Sri Lanka’s long- standing adversarial relationship with the “colonial” West.

Therefore, a revival of the American proposal to sign the US$ 480 million Millennium Challenge Corporation (MCC) fund or signing the Status of Forces Agreement (SOFA) seems unlikely in the foreseeable future. Joining the “Quad” is, of course, out of the question.

However, a pro-Western tilt is evident. One of the manifestations of this is Energy Minister Udaya Gammanpila’s going to Dubai for meetings with officials of Exxon Mobil and two other international oil and gas firms for the exploitation of gas in the Mannar Basin in North West Sri Lanka. According to Sunday Times, the Minister claims this project will help Sri Lanka pay off billions of dollars in foreign debt. Gammanpila is close to President Gotabaya Rajapaksa, and therefore, he might be negotiating with a green signal from the President himself.

The ECONOMYNEXT website reported that the government has engaged UK-based BellGeospace to conduct aerial surveys of the Mannar Basin to collect geophysical data which will help investors choose oil and gas exploration blocks there. “This is done at no cost to the government. The data belongs to the government. BellGeospace will sell the data for prospectors and recover their investment. They will also split profits with the government,” Gammanpila is quoted as saying.

Meanwhile, Finance Minister Basil Rajapaksa, who is known to be pro-US, has been pushing through an unsolicited proposal from the US-based company New Fortress Energy (NFE) to meet all of Sri Lanka’s Liquefied Natural Gas (LNG) needs. NFE will be expected to supply Sri Lanka’s entire LNG needs for the next ten years.

The deal also includes the purchase of 40% of shares of the Lankan company West Coast Power by NFE for a sum of US$ 250 million. The Lankan company is owned by Lanka Transformers Limited (LTL), a subsidiary of the state-owned Ceylon Electricity Board (CEB). It will be financially advantageous to the cash-strapped CEB and the country as a whole

Acceptance of the unsolicited proposal from the US company has come in for flak from the unions of the State-owned Ceylon Electricity Board (CEB) who want an open tender. But Basil Rajapaksa, a brother of President Gotabaya Rajapaksa, appears determined to pursue the deal with NFE

On the broader diplomatic plane, the Lankan government is stressing its “neutral” or “non-aligned” character to avoid being branded as pro-China. In a recent speech in Bologna in Italy, the Lankan Foreign Minister G.L.Peiris made it a point to extol “non-alignment” and argue that some of its principles are very relevant today.

In a zoom meeting with the Commonwealth Secretary-General Patricia Scotland in New York, Peiris reaffirmed Sri Lanka’s active commitment to dialogue and engagement with the British Commonwealth.

President Gotabaya has repeatedly said that Sri Lanka seeks goodwill and investments not only from China but from all countries. He had given concrete investment proposals to Mike Pompeo when he visited Sri Lanka as US Secretary of State.

To further smoothen relations with the US, the President has decided to appoint Mahinda Samarasinghe, a pleasant-mannered, tactful and seasoned negotiator with a fund of international experience both as a diplomat and as a cabinet Minister. As co-chair of the Permanent Standing Committee on Human Rights in Sri Lanka, Samarasinghe has worked in close cooperation with the United Nations Human Rights Council. 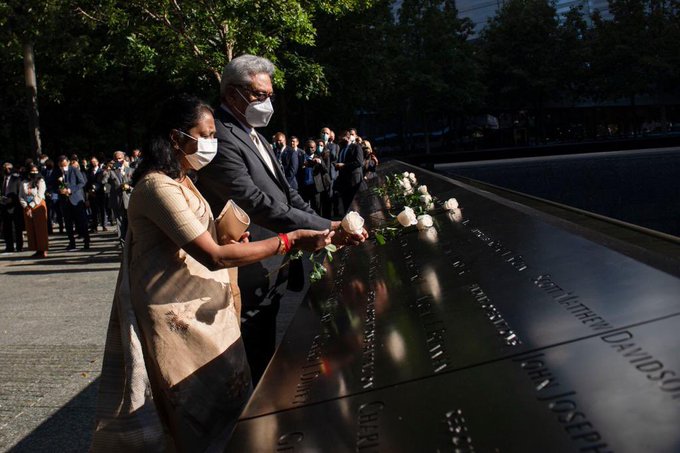 Cover Photograph: Sri Lankan President Gotabaya Rajapaksa tweets with photograph: Paid tribute to the lives lost in the 9/11 terrorist attacks in Washington and New York. #SriiLanka is committed to a safe and secure world, where terrorism and violence have no chance of prevailing.