COLOMBO: Sri Lankan President Gotabaya Rajapaksa on Wednesday appointed a Presidential Task Force (PTF) to study implementation of the ‘One Country, One Law’ concept and prepare a draft act to bring about one law for all Sri Lankans irrespective of religion or ethnicity.

But the appointment of militant anti-Muslim monk Galagoda Aththe Gnanasara Thero as chairman of the task force has left many human and civil rights workers in Sri Lanka wondering whether the PTF, which also lacks a single Tamil member, will be even-handed in its recommendations.

The tasks assigned to the PTF are: (1) Formulation and implementation of laws that are “fair by all, as set out in the Constitution of the Democratic Socialist Republic of Sri Lanka.” (2) Ensure that no citizen is discriminated against in the eyes of law and that no special treatment on grounds of nationality, religion, caste or any other consideration is given to anyone. (3) Ensure that the laws made under the ‘One Country, One Law’ concept are in accordance with nationally and internationally recognized humanitarian values.

The PTF is tasked with studying the draft acts and amendments that had already been prepared by the Ministry of Justice in relation to this subject, examining their appropriateness and making suggestions.

While the objectives stated in the gazette reflect a universalised yearning for equality before the law, there are major concerns given the ground reality in Sri Lanka.

Firstly, there is no Tamil in the PTF. In other words, the PTF has no representative of the island’s second largest ethnic and religious community.

Secondly, the Cabinet has already decided to ban the Muslim Qazi courts and amend the Muslim Marriage and Divorce Act, a decision Muslim clerics oppose tooth and nail.

Thirdly, doing away with community specific laws could be deemed a human rights violation by the UN Human Rights Council and the European Union.

Based on the government’s action, the EU could withdraw the GSP-Plus tariff concession to Sri Lanka which is coming up for review shortly. Withdrawal of the EU GSP-Plus trade concession will adversely affect Sri Lankan exports to Europe and impact the working population in Sri Lanka.

Lastly, and most importantly, the Chairman of the PTF is an extremely anti-Muslim Buddhist monk who is general secretary of the militant Buddhist organization, the Bodu Bala Sena (BBS).

Gnanasara Thero has been very close to President Gotabaya Rajapaksa and Prime Minister Mahinda Rajapaksa. He is also close to Sri Lanka Freedom Party leader and former President Maithripala Sirisena. In fact, when Thero was sentenced for six years in a contempt of court case, Sirisena pardoned and released him.

The pardon given to the monk on May 23, 2019 evoked protests from human rights activists because it violated all legal norms and procedures and was in direct contradiction with the concept of “equality before law” and a “common law for every Sri Lankan.”

The Centre for Policy Alternatives pointed out that the monk was convicted by the Court of Appeal on August 8, 2018 and sentenced to six years in prison. The Supreme Court rejected his appeal. The CPA stressed that presidential pardons exist to correct miscarriages of justice, but in the monk’s case, there was no miscarriage of justice as both the Court of Appeal and the Supreme Court had duly dismissed his appeals.

“As such, the pardon itself amounts to an undue interference with the legal process,” the CPA said in a statement. “The pardon legitimized the view that it is possible to act with contempt for the judiciary, be punished through a legitimate judicial process, and then enjoy impunity through a pardon granted on political considerations.”

The CPA pointed out that the pardon specifically signalled that some categories of citizens, such as the Buddhist clergy, could expect to enjoy preferential treatment when it comes to obeying the law.

The pardon came at a time when extremist Buddhist mobs instigated anti-Muslim riots across northwestern Sri Lanka, resulting in the death of one Muslim man and damage to a large number of Muslim residences, businesses and places of worship, the CPA recalled.

It said Gnanasara Thero had played a “documented role” in the past as Secretary of the Bodu Bala Sena in spreading hate speech and inciting violence towards minority communities, particularly Muslims. As such the pardon “represented a worrying endorsement of such anti-minority sentiment, and could only heighten the anxiety and fear being felt by Muslim Sri Lankans.”

It was in 2014 that Gnanasara Thero instigated mobs to attack Muslim homes and businesses in Aluthgama town, south of Colombo. Prior to that he had campaigned to prohibit the face covering worn by some Muslim women on grounds of security, and agitated for the abolition of halal certification for food products.

Gnanasara Thero has a fixation about Islamist terrorism and propagates the notion that Muslim Sri Lankans tolerate extremists in the community. On September 13, 2021 he told a TV program that there could be another attack similar to the Easter Sunday bombings on April 21, 2019 in which more than 260 died.

He further said that the bombs were ready to be detonated at any time, that he knew the groups involved, and that the President had also been informed.

This spread deep concern among Catholic Sri Lankans. The Catholic church, which has bitterly protested the government’s tardiness in getting to the bottom of the Easter Sunday attacks, demanded an urgent inquiry to ascertain the truth. 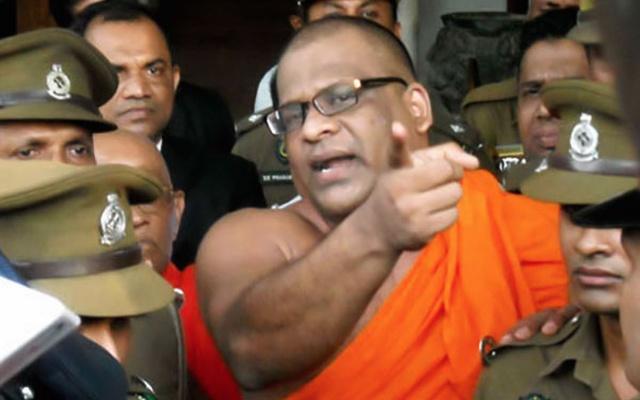