US-China : The Nerves Are Taut

The only breakthrough that can be ascribed to the virtual meeting between the US and Chinese presidents, Joe Biden and Xi Jinping, on Monday / Tuesday is that there has been an easing of visa restrictions for the accredited journalists of the two countries. But here too, a caveat must be added, namely, that “a three-point consensus on their visa policies” was actually reached just ahead of the virtual meeting, at the official level.

But then, do not look for concrete results in summit meetings. An important Beijing-datelined commentary by Xinhua news agency is full of pious hopes and yet describes the virtual meeting as “productive” enough. In the stocktaking of the virtual meeting, the conclusion can only be that, as the old proverb says, ‘You can lead a horse to water but you can’t make him drink.’

Biden wanted to schedule this meeting earlier. From mid-August onward, the stars got unaligned for Biden. The chaotic US withdrawal from Afghanistan and the ensuing battering he received in the Beltway; the consequent disarray in the transatlantic alliance; America’s allies increasingly apprehensive that his may be an one-term presidency; the cascading tensions with Russia over Ukraine and the Nato’s eastward gait; the precipitous fall in Biden’s rating in the American opinion — all these added up.

Meanwhile, inflation is rising and Treasury Secretary Janet Yellen acknowledged publicly that the tariffs on imports from China are contributing to the steep rise in prices. All in all, if the Biden presidency claimed in April at the Alaska meeting with top Chinese officials that they’d negotiate with China from a position of strength, as the virtual summit this week approached, the general impression was that he was holding a weak hand.

A USA Today poll earlier this month put Biden’s approval rating at under 38%. On the eve of the Biden-Xi meeting, a Politico/Morning Consult survey showed that 44% of voters approved of Biden’s job as president, but 58% disagreed with the statement “Joe Biden is capable of leading the country.”

The nerves are taut. The White House spokesperson even insisted that Biden was not really an “old friend” of Xi, as the latter keeps repeating. The Washington Post isn’t sure whether Xi keeps using the tantalising expression as “a term of endearment or an unwelcome moniker.”

The real significance of Tuesday’s meeting is that, as WaPo estimated, it “enabled the two global superpowers to engage on a slew of sensitive issues that have strained ties… But the engagement was (also) an acknowledgment that conflict… can have grave repercussions around the world.”

In brief remarks in front of reporters at the White House before the summit began, Biden told Xi, “As I said before, it seems to be our responsibility — as leaders of China and the United States — to ensure that the competition between our countries does not veer into conflict, whether intended or unintended. Just simple, straightforward competition. It seems to me we need to establish a common-sense guardrail, to be clear and honest where we disagree and work together where our interests intersect, especially on vital global issues like climate change.”

In contrast, Xi — fresh from the historic plenary of the Central Committee of the CCP that bracketed him with Mao and Deng in the pantheon of party leaders — pointed out the need to “increase communication and cooperation” between the two countries and offered that he was ready to work with Biden to “build consensus, take active steps and move China-US relations forward in a positive direction.”

That said, Xi firmly drew the red line on Taiwan, where the two leaders had an “extended” discussion. The White House readout said the US “strongly opposes unilateral efforts to change the status quo.” But according to the much longer Chinese version carried by Xinhua (2875 words), Xi “noted the new wave of tensions across the Taiwan Strait, and ascribed the tensions to the repeated attempts by the Taiwan authorities to look for US support for their independence agenda as well as the intention of some Americans to use Taiwan to contain China. Such moves are extremely dangerous, just like playing with fire. Whoever plays with fire will get burnt.”

Xi added, “We have patience and will strive for the prospect of peaceful reunification with utmost sincerity and efforts. That said, should the separatist forces for Taiwan independence provoke us, force our hands or even cross the red line, we will be compelled to take resolute measures.”

Xi ruled out compromise. According to Xinhua, “Biden reaffirmed the US government’s long-standing one-China policy, stated that the US does not support “Taiwan independence”, and expressed the hope for peace and stability to be maintained in the Taiwan Strait. The US is willing to work with China on the basis of mutual respect and peaceful coexistence, increase communication, reduce misperception, and handle differences constructively.”

Without doubt, the future trajectory of the relationship will almost entirely depend on how the US calibrates its stance. Beijing displayed its grit when just hours before the meeting, six Chinese aircraft entered Taiwan’s so-called air defence zone.

Evidently, much business was transacted during the three and a half hour meeting. The US National Security Advisor Jake Sullivan said Biden “raised the need for strategic stability discussions and that they need “to be guided by the leaders.” Overall, Sullivan sought to frame that the relationship is one of “steady state” competition in which the lines of communication remain open, while the US works with allies and partners “to confront China where we need to” and work together where “our interests … intersect.”

The Chinese assessment is distinctly more hopeful. A Xinhua report in People’s Daily highlighted that “under an earnest global gaze,” the two leaders “agreed in a productive virtual meeting… to steer the … relationship back on track. The encouraging consensus, along with other positive outcomes…delivered a direly needed shot of optimism.”

It went on to say, however, “It is high time that the United States started to act in a truly responsible fashion… A responsible Washington ought to uphold mutual respect with China with all its heart…It means the two countries should treat each other as equals and respect each other’s social system and development path, core interests and major concerns, as well as right to development… What is particularly imperative now is that the United States should… cease playing with fire on the Taiwan question, the most important and sensitive issue in China-US relations. No provocation or threat would make China budge an inch.

The commentary added, “Washington needs to take concrete actions to prove that its call for properly managing U.S.-China ties and proclamation of not seeking to contain China are a strategic choice, instead of a tactical gambit.” The trust deficit is palpable.

The bottom line is that the dysfunctional phase of the US-China relationship may be ending. The key priorities identified at the meeting are sure to be followed up. The government newspaper China Daily voiced confidence that the meeting “will lend stability to bilateral relations and set in motion more intense engagement.”

The Chinese commentators are pinning hopes that given the growing inflation pressure domestically and plunging approval ratings for Biden for his handling of the economy, Washington may be eager to work with Beijing by further easing tariffs and related trade issues.

On trade ties, Xi described the China-US economic and trade relations as mutually beneficial in nature and the two sides need to “make the cake bigger” through cooperation. The Chinese expectation is that more channels to strengthen communication and cooperation will be established after the summit meeting.

Two dozen US business associations have urged the Biden administration to reduce tariffs on Chinese goods to provide relief to Americans amid rising inflation, arguing that tariffs put in place over the last several years continue to disproportionately cause economic harm to US businesses, farmers, workers and families.

The influential US-China Business Council is hopeful that separate meetings will be scheduled soon to discuss economic and trade issues, while flagging that “economic and trade ties have been a ballast of the relationship and can help manage strategic risks.”

M.K.BHADRAKUMAR is retired from the Indian Foreign Service. 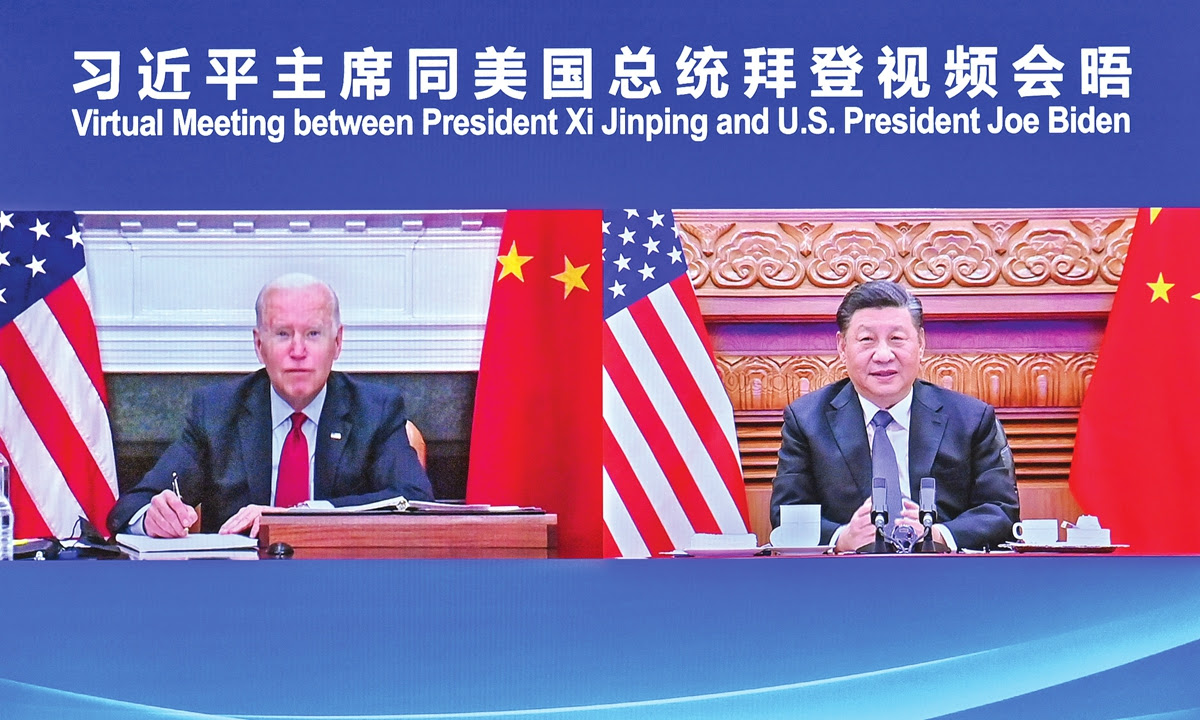