The Chinese Ambassador in Sri Lanka, Qi Zhenhong, made a high profile visit to the Tamil-majority Northern Province on December 15 and 16 exhibiting China’s new-found interest in that province.

Observers see the visit as a thinly-veiled challenge to India’s claims vis-à-vis Northern Sri Lanka given its geographical proximity to India and cultural and linguistic affinity with Tamil Nadu.

Playing the traditional Jaffna Tamil to the hilt, Ambassador Qi Zhenhong visited the Nallur Kadaswamy temple wearing a white dhoti (called Vetti) but without an upper garment and footwear. He was welcomed by the temple management and the Brahmin priests in the traditional Tamil Hindu way.

The Chinese embassy tweeted to say that Ambassador Qi visited the temple “with full respect to the Hindu religious and cultural tradition.” He made a “donation to the Kovil (temple) and shared his offerings to the needy citizens outside after his visit.”

Qi visited another iconic institution in Jaffna – the Jaffna Public Library – which was burnt down by anti-Tamil elements in 1981 and was restored with India’s help after the war. Ambassador Qi was accorded a traditional Tamil welcome at the Library which the Chinese embassy said was “well known in Asia”. The Ambassador donated laptops and books to enhance the capacity of the users and enlarge the collection of books.

Ambassador Qi Zhenhong had a “fruitful discussion” with the Northern Province Governor Jeevan Thiagarajah “on how to enhance mutual cooperation and improve local Tamil community livelihoods.” Five ROI water purification mobile plants, to be located in five districts of the Northern Province, were donated by the Chinese Embassy.

While China has invested heavily in massive projects in Sinhala-speaking South Sri Lanka, it has been keeping off the Tamil majority Northern Province and also the ethnically mixed Eastern Province, probably due to India’s sensitivities and lack of encouragement from the Sri Lankan State.

India considers the Sri Lankan North and to some extent Trincomalee district in the East, as its strategic backyard.

Every time news comes about a Chinese project in the North, antenna’s go up, and hackles rise, in New Delhi, at least in the English language media and the Delhi-based think tanks. Therefore, the present Chinese forays into Northern Sri Lanka will be watched in India keenly.

The Chinese appear determined to establish their diplomatic right to go anywhere or seek development projects anywhere in Sri Lanka. The Sri Lankan government is generally sympathetic to this plea, except when India explicitly raises objections.

Recently, India thwarted a Chinese company’s ADB-sanctioned project to build a hybrid (wind and solar) power plant in three islands off Jaffna not too far from the Indian shore. India raised the issue of security and reportedly offered to do the project with a US$ 12 million grant. Colombo promptly showed the door to the Chinese company, but is still to hand over the project to India.

The Tamil political parties and the Tamil media in the Northern province view Chinese entry into the North with disfavor. They promptly expressed disapproval of Chinese investments in the North. Tamil politicians and the media wrote against a Chinese-Sri Lankan joint venture to grow sea cucumbers in Jaffna for export to China.

The Northern Tamils were also reluctant to take the Sinopharm anti-COVID vaccines distrusting its efficacy. 50% of the population did not turn up in the initial phase of the vaccination program, saying that they would rather wait for Indian and US vaccines.

Among the politicized Tamils, the main objection to the Chinese is that China will not promote their human rights and political demands. While the West, led by the US, has been highlighting the human rights and war crimes issues in the UN and other international forums, and India has been asking the Lankan government to devolve power to the Tamils as per the 13th Amendment of the constitution, China has sided with the Sri Lankan state unreservedly and continually.

Therefore, the Tamils see any Chinese bid to get a foothold in the Tamil majority areas as being part of the Sri Lanka government’s political, economic and foreign policy agendas. 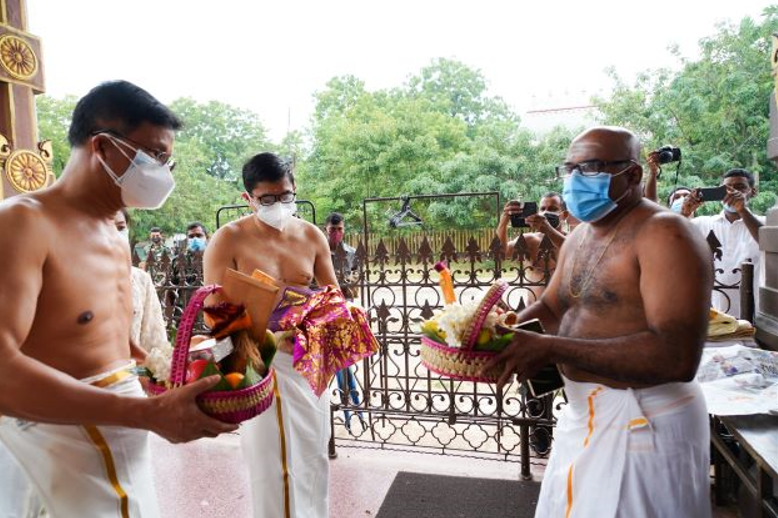