The Chinese stance on developments around Ukraine was initially one-dimensional, namely, there is no conceivable comparison between Ukraine and Taiwan issues, as they are fundamentally different, because Taiwan is a part of China, whereas Ukraine is an independent country. Factually, that was the correct stance.

However, there has been a shift lately toward acknowledging that the Eurasian tensions hold an analogy for Indo-Pacific region. The Chinese commentaries underline that the relentless expansion of the NATO in the post-Cold War era is the root cause of events unfolding over Ukraine. In the video call with President Biden in the weekend, President Xi Jinping implicitly touched on this aspect:

“The US and NATO should also have dialogue with Russia to address the crux of the Ukraine crisis and ease the security concerns of both Russia and Ukraine… As two Chinese sayings go, ‘It takes two hands to clap.’ ‘He who tied the bell to the tiger must take it off.’ It is imperative that the parties involved demonstrate political will and find a proper settlement in view of both immediate and long-term needs… An enduring solution would be for major countries to respect each other, reject the Cold War mentality, refrain from bloc confrontation, and build step by step a balanced, effective and sustainable security architecture for the region and for the world…”

In the spate of Chinese commentaries on Ukraine conflict, one report that catches attention for its incisiveness and insights is an interview in the Global Times entitled Russia-Ukraine conflict can be regarded as a ‘preview’ of US’ possible acts in Asia: Zheng Yongnian – NATO’s phantom.

Zheng Yongnian is best known as an international authority on Chinese politics, political economy and the CCP. He opined categorically that NATO’s expansion will not stop and it will likely expand to Asia.

In his view, the US is already putting in place “the prototype of an “Asian NATO” — referring to AUKUS, Quad, Five Eyes, Indo-Pacific Strategy, US moves vis-a-vis Vietnam and Singapore. Second, he said China should anticipate a Ukraine-style crisis taking place in “many countries and regions” in Asia and “the expansion of NATO will only stop when another bloc can compete with it and form a check and balance.”

Third, while China’s economic openness and interdependence are its strong points, that may not prevent a war but can probably slow it down. He said bluntly: “Once fierce conflicts happen between China and the US, will the US kick China out of the SWIFT system as it did with Russia? My opinion is: 100 percent YES.” That said, China’s economy, deeply embedded in the West, can make the West feel real pain.

However, Zheng Yongnian also pointed out that it is not all black and white, either. One the one hand, while China and Europe have common interests and no geopolitical disputes, on the other hand, Europe’s current solidarity with the US is very fragile, as European interests are at risk in a longer term perspective and the EU itself is “at a particularly vulnerable moment.”

Besides, a remilitarised Germany will cause uneasiness in the continent, especially for France, with geopolitical implications. Also, the spectre of nuclear proliferation haunts Europe now. It is no longer possible to rule out conflicts happening again within the Western civilisation.

Interestingly, Zheng Yongnian also flagged that the geopolitical landscape of Asia may radically change if Japan, on the footfalls of Germany, also opts for remilitarisation. “This will impact on the entire East Asia, he warned.”

The analysis is very profound and there is very little to add to it. China is wary that Washington is moving in the direction of creating a “Ukraine-like” strategic dilemma for Beijing apropos Taiwan. To be sure, China has been provoked by the abrasive remarks recently by Gen. Kenneth Wilsbach, commander of Pacific Air Forces, on the “key lessons” Beijing should draw out of the Ukraine conflict.

The general listed them as the “solidarity of the global community” in opposing “an unprovoked attack on a neighbour” and “the onerous sanctions that have economically crippled Moscow”. Wilsbach threatened that if China behaves in the Russian way, “something more robust will happen.”

In addition, he warned, China should also consider the opposition of regional countries, apart from the ravages of the war in human lives and treasure. It could not have been lost on Beijing that Wilsbach shot straight from the hip just before Biden’s phone call to Xi Jinping.

Against this backdrop, the speech by Chinese Vice Foreign Minister Le Yucheng on Saturday at the Tsinghua University on the implication of the Ukraine developments for the Asia-Pacific region merits careful attention.

These are the first authoritative remarks by a top Chinese official acknowledging that “the Ukraine crisis provides a mirror for us to observe the situation in the Asia-Pacific. We cannot but ask, how can we prevent a crisis like this from happening in the Asia-Pacific?” They have followed immediately after the 2-hour long phone conversation between President Xi Jinping and President Biden.

Le Yucheng took note that the Asia-Pacific is in “promising situation” today — an anchor of peace and stability, an engine for growth and a “pace-setter” for development. The region faces two choices between building “an open and inclusive family for win-win cooperation or go for small blocs based on the Cold War mentality and group confrontation.”

Le Yucheng explained this binary choice as between: “peace and not undermining regional tranquility; so-called absolute security and common security; mutual respect and wanton interference in others’ internal affairs; and, unity and cooperation versus division and confrontation. Without doubt, he was sounding alert about the Us’ so-called Indo-Pacific strategy.

Le Yucheng underscored that the India-Pacific strategy characterised by acts of provocation, formation of “closed and exclusive small circles or groups”, and fragmentation and bloc-based division can only lead to a situation “as dangerous as the NATO strategy of eastward expansion in Europe… (which) would bring unimaginable consequences, and ultimately push the Asia-Pacific over the edge of an abyss.” He underscored the criticality of the regional states pursuing “independent, balanced and prudent foreign policies” that dovetail with the process of regional integration.

The parallels between the situations around Ukraine and Taiwan respectively, are being discussed explicitly in the Chinese commentaries and articulation — while the US “squeezed Russia’s strategic space” through NATO expansion and simultaneously incited Kiev to confront Russia, when it comes to Taiwan too, Washington is instigating the secessionist forces in the island upgrading arms sales to provoke Beijing.

Of course, the US has refrained from direct intervention in Ukraine, as Russia is not only a military power but also a nuclear power. The big question is whether China will arrive at a conclusion that its best opportunity “to solve its internal Taiwan question” lies in confronting the US at the present juncture when “the US is short of confidence and needs to bluster to embolden itself” and when the NATO’s hands are full in Eurasia and it is unlikely that the US’ allies in the Asia-Pacific will want to intervene in Taiwan. 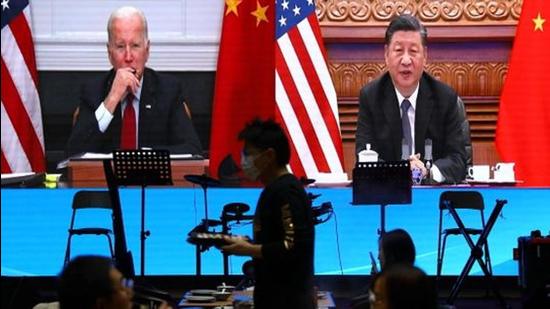 Cover Photograph: Video conversation between China and US Presidents on March 18