US and allied economic sanctions against Russia for its illegal invasion of Ukraine have not achieved their declared objectives. Instead, they are worsening economic stagnation and inflation worldwide. Worse, they are exacerbating hunger, especially in Africa.

Unless approved by the UN Security Council (UNSC), sanctions are not authorized by international law. With Russia’s veto in the UNSC, unilateral sanctions by the US and its allies have surged following the Ukraine invasion.

During 1950-2016, ‘comprehensive’ trade sanctions have cut bilateral trade between sanctioning countries and their victims by 77% on average. The US has imposed more sanctions regimes, and for longer periods, than any other country.

Unilateral imposition of sanctions has accelerated over the past 15 years. During 1990-2005, the US imposed about a third of sanctions regimes around the world, with the European Union (EU) also significant.

The US has increased using sanctions since 2016, imposing them on more than 1,000 entities or individuals yearly, on average, from 2016 to 2020 – nearly 80% more than in 2008-2015. The one-term Trump administration raised the US share of all new sanctions to almost half from a third before.

During January-May 2022, 75 countries implemented 19,268 restrictive trade measures. Such measures on food and fertilizers (85%) greatly exceed those on raw materials and fuels (15%). Unsurprisingly, the world now faces less supplies and higher prices for fuel and food.

Monetary authorities have been raising interest rates to curb inflation, but such efforts do not address the main causes of higher prices now. Worse, they are likely to deepen and prolong stagnation, increasing the likelihood of ‘stagflation’.

Sanctions were supposed to bring Russia to its knees. But less than three months after the rouble plunged, its exchange rate is back to pre-war levels, rising from the ‘rouble rubble’ promised by Western economic warmongers. With enough public support, the Russian regime is in no hurry to submit to sanctions.

All these have driven up world prices for grain and oilseeds, raising food costs for all. As of 19 May, the Agricultural Price Index was up 42% from January 2021, with wheat prices 91% higher and corn up 55%.

The World Bank’s April 2022 Commodity Markets Outlook notes the war has changed world production, trade and consumption. It expects prices to be historically high, at least through 2024, worsening food insecurity and inflation.

Western bans on Russian oil have sharply increased energy prices. Both Russia and its ally, Belarus – also hit by economic sanctions – are major suppliers of agricultural fertilizers – including 38% of potassic fertilizers, 17% of compound fertilizers, and 15% of nitrogenous fertilizers.

Fertilizer prices surged in March, up nearly 20% from two months before, and almost three times higher than in March 2021! Less supplies at higher prices will set back agricultural production for years.

With food agriculture less sustainable, e.g., due to global warming, sanctions are further reducing output and incomes, besides raising food prices in the short and longer term.

Many poor and food insecure countries are major wheat importers from Russia and Ukraine. The duo provided 90% of Somalia’s imports, 80% of the Democratic Republic of Congo’s, and about 40% of both Yemen’s and Ethiopia’s.

It appears the financial blockade on Russia has hurt its smaller and more vulnerable Central Asian neighbours more: 4.5 million from Uzbekistan, 2.4 million from Tajikistan, and almost a million from Kyrgyzstan work in Russia. Difficulties sending remittances cause much hardship to their families at home.

Although not their declared intent, US measures during 1982–2011 hurt the poor more. Poverty levels in sanctioned countries have been 3.8 percentage points higher than in similar countries.

Sanctions also hurt children and other disadvantaged groups much more. Research in 69 countries found sanctions lowered infant weight and increased the likelihood of death before age three. Unsurprisingly, economic sanctions violate the UN Convention on the Rights of Children.

As polemical recriminations between Russia and the US-led coalition intensify over rising food and fuel prices, the world is racing to an “apocalyptic” human “catastrophe”. Higher prices, prolonged shortages and recessions may trigger political upheavals, or worse.

The UN Secretary-General has emphasized, “We need to ensure a steady flow in food and energies through open markets by lifting all unnecessary export restrictions, directing surpluses and reserves to those in need and keeping a lead on food prices to curb market volatility”.

Despite declining World Bank poverty numbers, the number of undernourished has risen from 643 million in 2013 to 768 million in 2020. Up to 811 million people are chronically hungry, while those facing ‘acute food insecurity’ have more than doubled since 2019 from 135 million to 276 million.

With the onset of the Covid-19 pandemic, OXFAM warned, the “hunger virus” could prove even more deadly. The pandemic has since pushed tens of millions into food insecurity.

Economic sanctions are the modern equivalent of ancient sieges, trying to starve populations into submission. The devastating impacts of sieges on access to food, health and other basic services are well-known.

Sieges are illegal under international humanitarian law. The UNSC has unanimously adopted resolutions demanding the immediate lifting of sieges, e.g., its 2014 Resolution 2139 against civilian populations in Syria.

But veto-wielding permanent Council members are responsible for invading Ukraine and unilaterally imposing sanctions. Hence, the UNSC will typically not act on the impact of sanctions on billions of innocent civilians. No one seems likely to protect them against sanctions, today’s weapons of mass starvation. 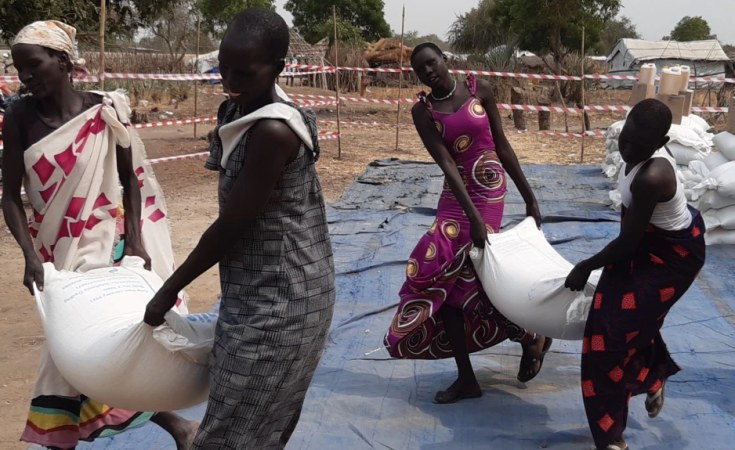