NEW DELHI: A report by a Syrian activist group that claims to throw light on the plight of women living in the territory controlled by Islamic State militants alleges that women are being forced to marry militants, many of whom are known to indulge in “brutal and abnormal” sexual practices.

“A large section of ISIS members suffer from sexual anomalies and brutal instinctive desire for sex, except for sadism and perversion which they [are] carrying already,” alleges the online report published by well-known underground citizen journalism group Raqqa Is Being Slaughtered Silently (RSS).

Among the list of perversions listed are the purchase of “strange underwear,” marrying “more than one wife, during short periods” and the “search for blue pills in order to increase their strength to have more sex.”

Excerpts from the report are reproduced below:

“Along with ISIS group control of the city and the influx of foreign fighters to live in the land of caliphate, the group and its fighters sought to mix with people and integrate into the community, through proliferation in neighborhoods and search for wives from the women of the city, this matter was rejected by a large section of the people, where they said that they do not marry off their daughters from strangers.

ISIS tried through its restrictions to crack down women, in order to force them indirectly to marry from its members, by the following practices:

1. Commitment wearing Islamic dress, according to the perspective of the group.

2. Prevent the women from wandering without Muhram (close relative) inside towns and villages.

3. Prevent the women under the age of fifty from traveling only for health reasons.

4. Close the institutes and universities.

5. Prevent the girls from traveling to other regions to follow education.

6. Prevent the women from working without Muhram with her in the same workplace.

7. Prevent the women from going to the ovens.

8. Harassment of women who wandering in the city without Muhram.” 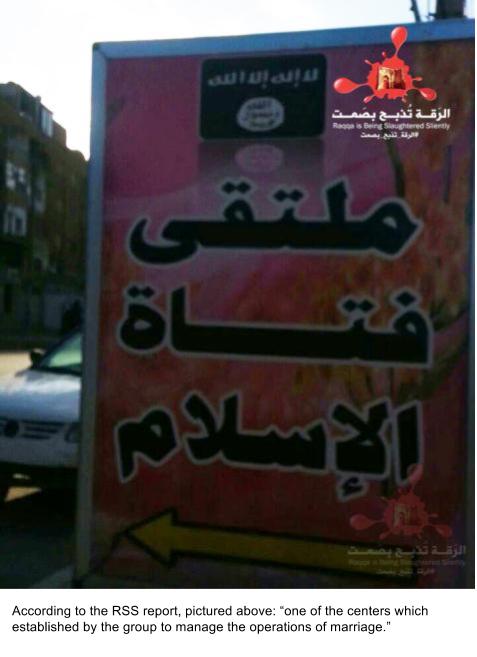 “A large section of ISIS members suffer from sexual anomalies and brutal instinctive desire for sex, except for sadism and perversion which they carrying already, and this things appeared through:

1. Buying strange underwear from their women, where they seek to buy underwear which carry a lot of anomalies nature.

3. Search for blue pills in order to increase their strength to have more sex.

4. Many cases that have been recorded from hospitals and physicians, about women who have been subjected to sexual practice in a brutal and abnormal manner.”

The Islamic State’s treatment of women has been reported on by The Citizen (see here and here). The militant group’s own publications reveal a deeply regressive attitude toward women, which in turn indicates that RSS’ allegations may not be entirely unfounded.